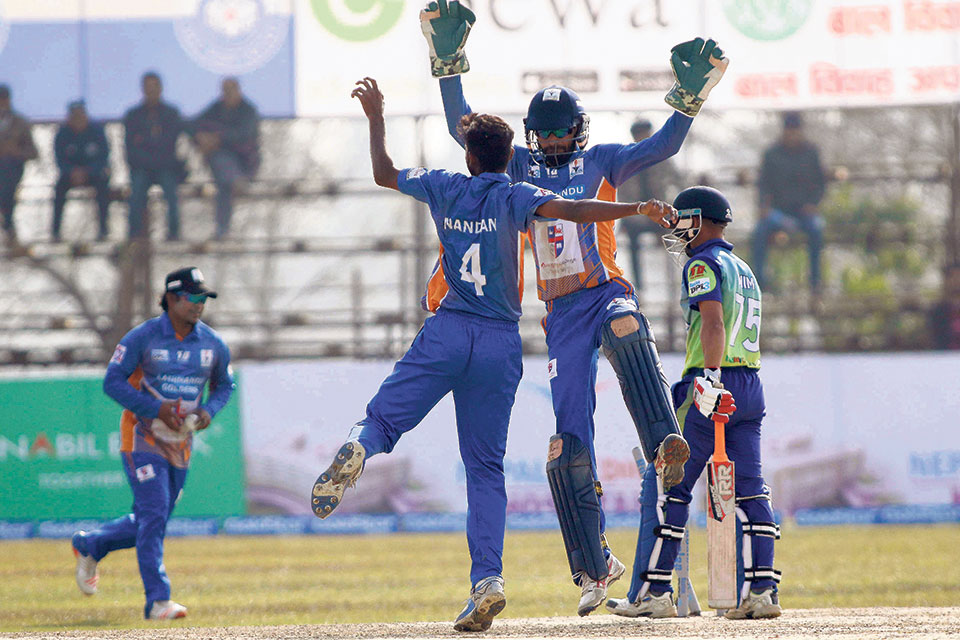 DHANGADHI, Feb 18: Indian all-rounder Ankit Dabas registered his third player of the match of the tournament as Kathmandu Goldens completed a record win by run margin against Rupandehi Challengers in the Dhangadhi Premier League group match played at Fapla International Cricket Ground in Dhangadhi on Sunday after a day of washout.

Goldens is unbeaten in the tournament with a match to go. The runner-up of last season is on top of the table with seven points with one washout against Biratnagar Kings.

Dabas delivered a spell of four overs conceding eight runs and picking up a wicket after scoring 43 in the first innings to provide Goldens a playoff place registering a win by 100 runs, which is the most in DPL’s three years history.

None of the Challengers’ star-studded batsmen were able to reach double figures. Sumitt Maharjan’s 5 runs were the highest score of the innings as the likes of Pardeep Airee, Binod Bhandari, Hong Kong batsman Babar Hayat, and Indian all-rounder Punit Mehra fell for 4, 1, 3, and 3 runs respectively, chasing the target of 134 presented by Goldens.

Nandan Kumar Yadav picked three which included the wickets of Sandeep Sunar and Bhim Sarki for three runs and a duck, respectively. Similarly, left-arm spin twins Lalit Rajbanshi and Surya Tamang shared two wickets each. Yogendra Singh Karki picked up a wicket followed by a run-out of Pradeep Airee.
Earlier, Goldens won the toss and elected to bat first. Dabas scored a gritty 43 runs which included three sixes and a four in 40 deliveries. He was supported by Anil Kumar Sah’s 23 and Rashid Khan’s big finish of 14 runs from five deliveries, which included two fours and a six. Chalengers bowlers Sob, Mehra and youngster Anil Kharel shared two wickets each as Goldens scored 133 runs from 20 overs for the loss of seven wickets.
Challengers skipper Basant Regmi bowled four overs for 17 runs without picking any wickets and scored two runs with the bat facing 21 deliveries in the middle. The skipper stressed on match plan which did not work out for batsmen as they folded out for record lowest total.
“We had a strategy in the match for the batsmen but unfortunately it didn’t work out,” said Regmi after the match.
After two back-to-back washouts, against Biratnagar Kings and Dhangadhi Stars due to rain, and two points on the group table, Mahanedranagar United avoided the third washout in a row and collected valuable two more points to their total. United has a chance to reach the playoffs in case one of the three teams, CYC Attariya, Kings and Rupandehi Challengers, lose all their remaining matches and their net run rates fall under United’s.
In a reduced over match due to wet outfield conditions, United defeated Attariya by seven wickets in a 6-over per side match during Dhangadhi Premier League (DPL) played at Fapla International Cricket Ground, in Dhangadhi on Sunday.
Aarif Sheikh stayed unbeaten on 15 runs from seven deliveries guiding his team home in 5.3 overs chasing a total of 55 runs against home team Attariya. Indian batsman Subramanium Anand scored 17 runs opening the batting from 9 deliveries to lay the foundation for the win. Bhuvan Karki picked up two wickets for Attariya but it was not enough to save the defeat.
Earlier, Attariya had won the toss and elected to bat first. Player of the match Sagar Dhakal dismissed both overseas (Indian) batsmen Sunny Patel and Jaykishan Kolsawala in back-to-back deliveries, in the key third over of the innings as Attariya was limited to 54 runs for the loss of 5 wickets in 6 overs.
Patel scored 19 runs from 11 deliveries including two sixes and Kolsawala scored 10 runs from 6 deliveries. Similarly, skipper DS Airee scored 10 runs from seven deliveries. Avinash Bohora picked up two wickets supported by United skipper Sharad Vesawkar’s sole wicket of the match.
Dhangadhi will take on Mahendranagar, while Biratnagar will face Attariya on Monday.