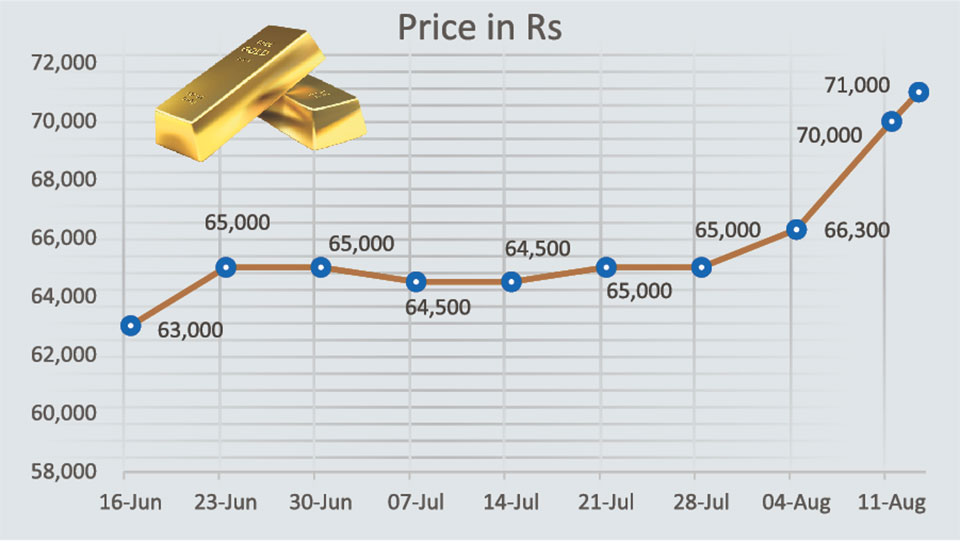 The price increased by Rs 1,000 in a day. According to the Federation of Nepal Gold and Silver Dealers' Association (FENEGOSIDA), the bullion was traded for Rs 70,000 on Monday.

Gold price in the Nepali market has been constantly rising after the government unveiled its annual budget for the current Fiscal Year 2019/20.

While gold price has been continuously rising, the market is deserted. Gold traders say that people are visiting jewelry shops to sell their gold holdings rather than to buy. Bishal Jewelers, a Lalitpur-based jewelry shop, has so far received only one order for Teej, a Hindu festival celebrated by women.

Bir Bahadur Karki, proprietor of Bishal Jewelers, said that the number of goldsmiths has decreased as there is no work for them. "Some have opted for foreign employment while others have left the profession for other jobs," he said.

"People used to order ornaments for Teej at this time of the year, but this year only one order for a half-tola ornament has been received," Karki added, "We used to sell gold weighing half to one kilo for Teej in the previous years. Along with the price rise, people are selling gold, not buying it."

Industry insiders say the domestic market currently has only one-fourth of the usual demand. Ramesh Maharjan, president of the Federation of Nepal Gold Silver Gem and Jewelry Associations, said, “As gold price continues to rise in the international market, India's gold import rate has plunged.”

Nepal government's step to increase the customs duty on gold imports by Rs 800 per 10 grams, US-China trade war, Federal Reserve's decision to lower the interest rate by 25 basis points for the first time in a decade, among other reasons are attributed to the market turbulence.