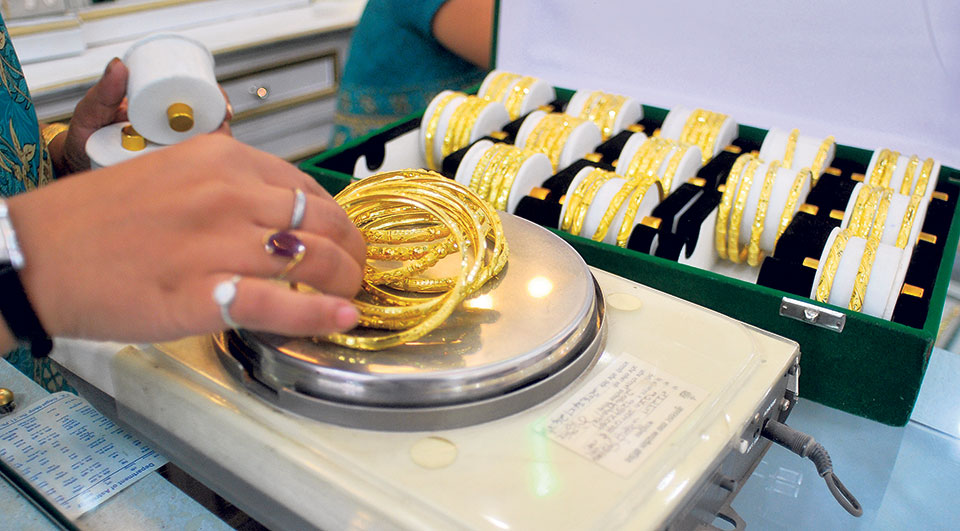 KATHMANDU, March 28:  Gold price has remained unchanged at Rs 58,500 per tola this week.

According to the traders, the main reason behind the increment in gold price is price hike in the international market due to various reasons including the impending trade war between the United States and China which have prompted investors to seek refuge in safe assets.

According to officials of the Federation of Nepal Gold and Silver Dealers Associations, the price of gold in the Nepali market has increased in line with the international market. “Gold price has gone up in the international market as investors are interested to put their money on the yellow rather than stock market,” said Mohan Kumar Sunar, president of the federation. “Global stock markets are in a bearish mode due to escalating tensions between China and the US, and this prompted investors to look for secure investment i.e. gold. This has caused demand for gold to spike up.”

Reuters newswire have reported that gold prices rose early Monday to a five-week high as the threat of a trade war between the United States and China drove investors to seek refuge in safe assets. Gold was traded in the international market at US$ 1,350.76 per ounce on Monday.

Likewise, another report of the newswire states that the decision of the US government to expel 60 Russian diplomats also caused gold price in the international market to further rise. “Gold prices rose for a third straight session on Tuesday as the dollar languished near a five-week low, as investors eyed rising tensions between Russia and the West even as a US-China trade spat appeared to ease.  Spot gold was up 0.16 percent at $1,355.19 per ounce at 0739 GMT, after touching $1,356.66 earlier in the session, its highest since February 16,” Reuters reported.

Sunar, however, is hopeful that the tension between the two giant economies will ease soon as the stock market jumped on Tuesday following the beginning of the negotiations between China and the US. “Stock markets jumped in response to reports the United States and China were negotiating to avert a trade war and this dented the appeal of gold, seen as a safe haven.”

According to the federation, the highest recorded price of gold in the Nepali market was Rs 63,300 per tola recorded on August 28, 2013.

KATHMANDU, May 25: The infographics regarding gold possessions by Prime minister KP Sharma Oli and his cabinet of ministers. ... Read More...

NRB has 10 tons of gold in reserves

KATHMANDU, Nov 3: Can you guess how much gold does the Nepal Rastra Bank (NRB) actually have? Leave along general public,... Read More...

Gold for Neer and Ganga