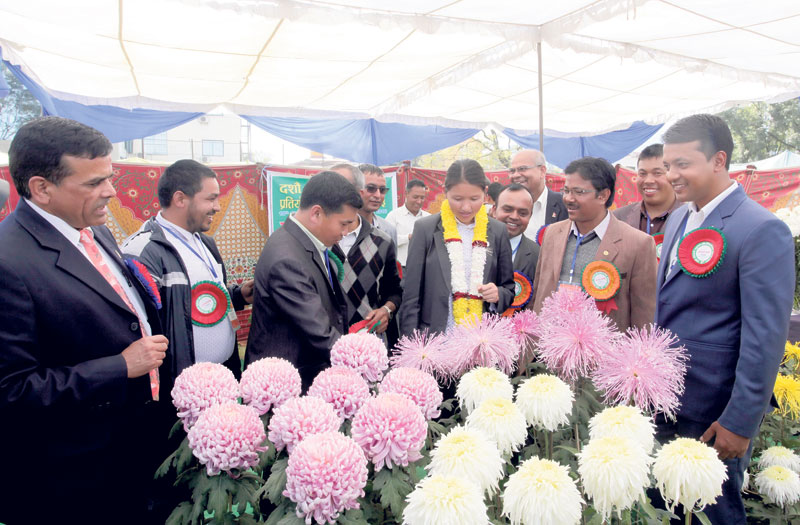 KATHMANDU, Oct 27: The 10th Godavari Flower Expo 2016 kicked off at the Jawalakhel Football Ground in Lalitpur from Wednesday.

The expo, which will continue till Saturday, is being organized by the Floriculture Association of Nepal (FAN), targeting the upcoming Tihar and Chhath festivals.

Ministry of Agricultural Development is one of the supporters of the expo which is being organized with the slogan 'Ropera Ful Godawari, Sajau Ghar Waripari'.

The expo has 42 stalls most of which are showcasing Godavari flower (chrysanthemum).

Speaking at the inauguration ceremony, officials of FAN talked about various difficulties and problems that floriculture entrepreneurs are facing. According to them, lack of skilled manpower, modern technology, investment and modern infrastructures are the major problems faced by the floriculture sector. They also said that banks and insurance companies were showing reluctance to provide their services to floriculture firms.

Ramji Timilsina, vice president of FAN, hoped that the exhibition will help to expand market of flowers and increase healthy competition among floriculture entrepreneurs. “The market in the Kathmandu Valley is limited. Expos like this will attract customers and help to expand the market,” he added.

At the program, the organizers also awarded best stalls. Samjhana Nursery of Sanepa was declared the best stall, while Arun Nursery of Koteshwar and SR Nursery of Dhumbarahi took home the awards for second and third prize, respectively.  Similarly Samjhana Nursery bagged the prize on reflex, incurve and miniature category, while Arun Nursery and R and A Flora Farm were declared best stall on spider and cut flower categories, respectively.

Speaking at the program, Minister for State for Agriculture Development, Radhika Tamang, said commercial flower farming is creating new jobs and supporting national economy. “The participation of women in this sector is very satisfying,” Tamang said, promising all possible support to floriculture entrepreneurs.

Mina Giri, a visitor from Lagankhel, said she was very happy to get different varieties of flowers under one roof that too at low price.

IN PICS: Marigold blooms for Tihar in Tanahu

DULEGAUDA, TANAHU, Oct 25: Festival of lights, Tihar or Deepawali is around the corner. It is also the festival of... Read More...

KATHMANDU, March 29: The Department of Food Technology and Quality Control is organizing a two-day food expo at the Bhrikuti Mandap... Read More...