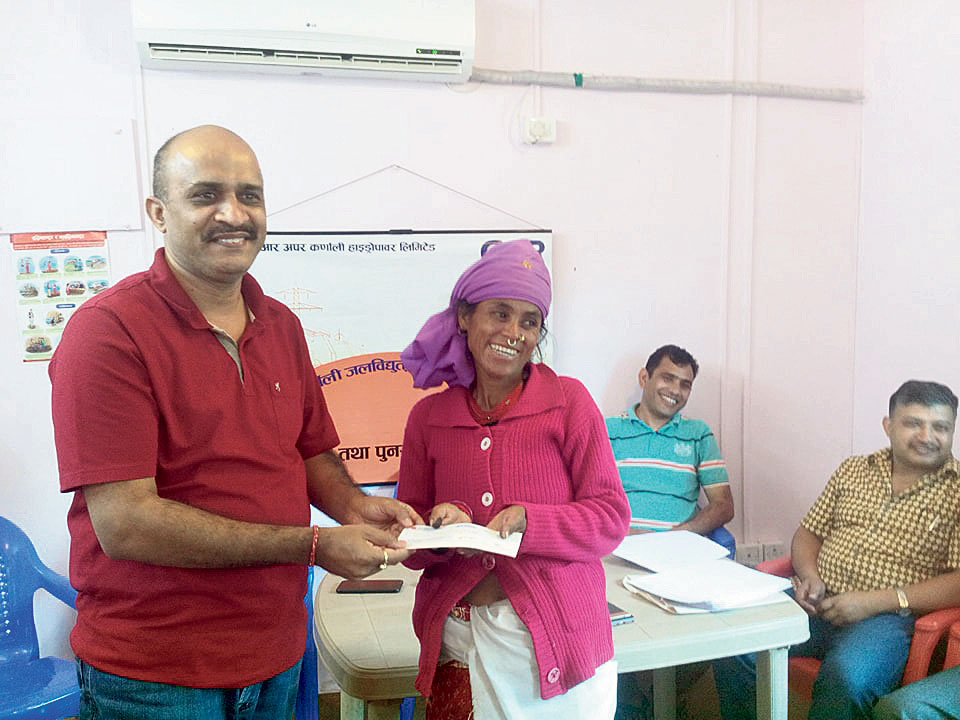 GMR official, KK Sharma, hands over a bank check to Deukala Devi Buda of Bhairavsthan, Achham, for the amount she was entitled to receive in compensation for the land acquired from her.

DAILEKH, Sept 24: GMR, the developer of Upper Karnali hydroelectricity project, has started distributing compensation to the locals at a very slow pace, after a long wait, against the land acquired for the project.

Looking at the slow pace of the company, the locals have suspected that the remaining households will have to wait much longer for the compensation, even if the company starts giving compensation after the Tihar festival. It took more than a month to distribute compensation to the 20 households.

GMR representatives have claimed that the delays in opening of bank counter in the affected area and evaluation of land had delayed the distribution.

KK Sharma, GMR’s chief of construction for the project, said that though only 20 households received compensation, rest of the households will receive it after the Tihar festival. He said that the compensation has been distributed after evaluation of the affected households’ annual income from the trees, fruit-plants, sheds and land that they would lose.

The land has been registered under Upper Karnali Hydro Power Company at the offices of land revenue in Achham and Dailekh districts.

Deukala Devi Buda, a local of Bhairavsthan of Achham, said after receiving the compensation amount: “The rumor of compensation distribution existed since the last 10 years. I finally got it now.”

Likewise, Gajraj BC of Bhairavsthan, Achham, said that the wait was finally over for him. “We received the amount now. All the affected households should receive it at the earliest,” he added.
GMR will use the acquired forest area from Dailekh and Achham districts for the construction of tunnel, embankment and power house. GMR will have to plant 25 saplings against each plant lost. The District Forest Office will assign it land for the plantation. GMR should hand it over to the forest office after five years.

It is stated in the Project Development Agreement (PDA) that GMR will invest 1 percent of its total investment in restoration and resettlement of the affected communities and addressing environmental and social problems caused by the project.

Fellow Nepalis, fear the government, fear as much for the country
4 hours ago
Govt concerned over Dehradun incident: Foreign Ministry
9 hours ago

2,508 people diagnosed with COVID-19 in Nepal on Saturday
2 hours ago