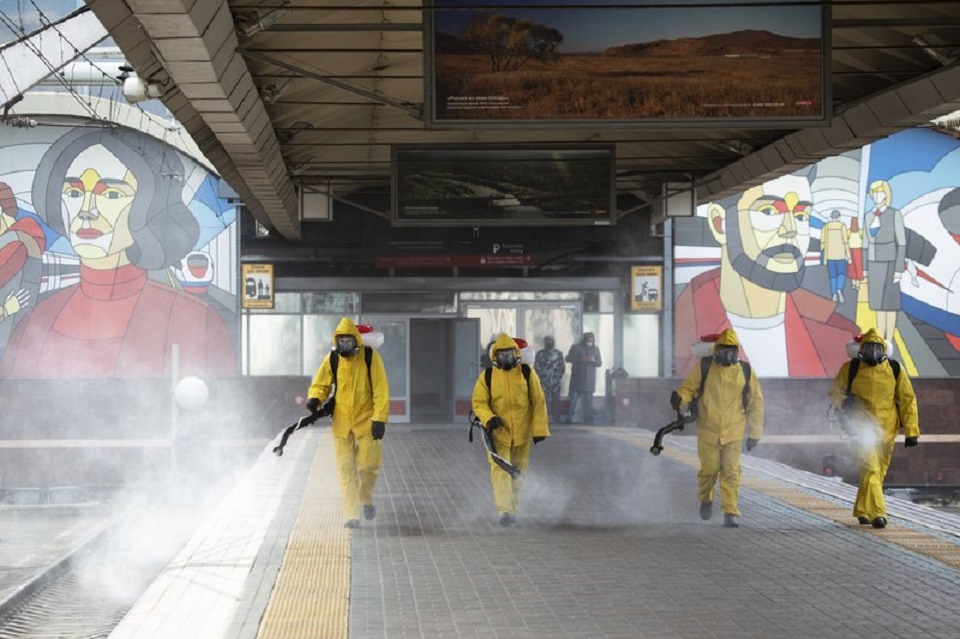 Employees of the Federal State Center for Special Risk Rescue Operations of Russia Emergency Situations disinfect a platform of Leningradsky railway station in Moscow, Russia, Tuesday, May 19, 2020. Russia has continued to see a steady rise of new infections, and new hot spots have emerged across the vast country of 147-million people that ranks the second in the world behind the United States in the number of coronavirus cases. (AP Photo/Pavel Golovkin)

MOSCOW, May 19: New coronavirus cases have been spiking from India to South Africa to Mexico in a clear indication that the pandemic is far from over, while Russia and Brazil now sit behind only the United States in the number of reported infections.

The surges come as much of Asia, Europe and scores of U.S. states have been easing lockdowns to restart their economies as new infections wane. U.S. autoworkers, French teachers and Thai mall workers are among hundreds of thousands of employees back at work with new safety precautions.

Russia reported a steady rise in new infections Tuesday and new hot spots have emerged across the nation of about 147 million. Russia registered 9,263 new cases in the last 24 hours, bringing the total to nearly 300,000 infections — about half of them in Moscow. Authorities say 2,837 people with COVID-19 have died in Russia, a figure some have questioned.

Some experts argue Russian authorities have been under-reporting coronavirus deaths by listing chronic illnesses as the cause of death for many who tested positive. Authorities angrily deny suggestions they have been manipulating statistics, saying Russia’s low death toll reflects early preventative measures and broad screening that helped stem contagion. Nearly 7.4 million tests have been conducted.

In Russia’s second-largest city of St. Petersburg, a virus hot spot, all burials now must be with closed coffins irrespective of the cause of death as an extra precaution. Previously the measure only applied to COVID-19 deaths.

Russia’s case load is second only to the U.S., which has seen 1.5 million infections and over 90,000 deaths. The country’s prime minister, Mikhail Mishustin, resumed work Tuesday after a bout of coronavirus.

Cases are still rising across Africa, where all 54 nations have seen confirmed infections for a total of 88,172 cases and 2,834 deaths, according to the Africa Centers for Disease Control and Prevention.

South Africa has the highest number of cases at 16,433 and 286 deaths. Infections have increased dramatically in Cape Town and the surrounding Western Cape province, which now accounts for 61% of South Africa’s total.

Latin America has seen more than 483,400 confirmed coronavirus cases and 30,900 dead. The largest number of infections are in Brazil, which became the world’s third worst-hit county Monday with more than 250,000 infections despite limited testing. Hospital officials report more than 85% occupancy for intensive care beds in the states of Rio de Janeiro and Sao Paulo.

Alarmingly, some countries have seen encouraging signs reverse: Iran reported a steady drop in new virus infections through April, only to see them rise again in May.

But there is new hope after an experimental vaccine against the coronavirus yielded encouraging results, albeit in a small and extremely early test. Stocks rallied Monday on the news.

Number of COVID-19 cases on rise in districts linked with India, as India suffers the second wave