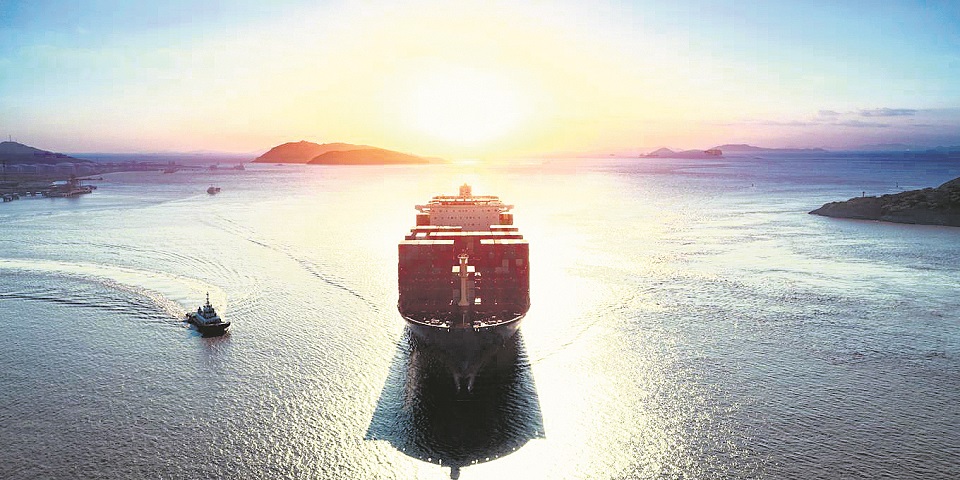 The author, a former director-general of the World Trade Organization and EU trade commissioner, is a Global Ocean Commissioner
news@myrepublica.com

Keeping climate change in check will require reducing the carbon footprint associated with global shipping, which accounts for the bulk of world trade

PARIS – Most discussions of trade nowadays inevitably feature the words “war,” “tariff,” or “Trump.” But look beyond the headlines and you will see the foundations of a more collaborative, healthy, and sustainable world trade system emerging.

The global shipping industry, which carries 90 percent of all global trade by volume, has started to acknowledge the urgency of climate change, and is taking steps to minimize its environmental impact. On January 1, 2020, cleaner fuel standards for shipping will take effect globally. After more than a decade of negotiations, member-state governments at the United Nations International Maritime Organization (IMO) have agreed to a new “global sulfur cap,” demonstrating that multilateralism is still possible. The method of powering shipping vessels will now undergo a change on the scale of the shift from coal to oil a century ago.

Under the IMO accord, the shipping industry will be required to reduce sulfur-dioxide and nitrous-oxide pollution on a massive scale. Among other things, the policy ensures that millions of children around the world will have a chance to live healthier lives. Over time, we have learned that these air pollutants can have a deleterious effect not just on our hearts and lungs, but also on brain development. Now that the cap is coming into force, we will soon benefit from the extraordinary effects of a new, permanent global health dividend. We can expect to see data in the coming years indicating reduced health-care costs and improved educational outcomes from around the world.

In the meantime, governments will be collaborating on additional measures to reduce the environmental and climate impact of the global maritime trade system. Such efforts are essential to reach the targets outlined in the 2015 Paris climate agreement. As matters stand, the shipping sector, ranked alongside countries, is the world’s sixth-largest greenhouse-gas (GHG) emitter.

The good news is that under an ambitious IMO agreement concluded last year, the shipping sector must reduce its GHG emissions to “at least” half of their current levels by 2050, while also taking steps to start reducing emissions before 2023. The bad news is that discussions over the best policies for achieving these goals have stalled. As important as mutually agreed targets are, they are no substitute for concrete action.

Still, policymakers have an opportunity to get back on track during a new round of international talks in London this month on decarbonizing global shipping. There, delegates to the IMO are considering a wide range of policy options that could make a significant difference.

For example, Denmark, Germany, and Spain have proposed tough, transparent “operational efficiency” regulations that could reduce carbon-dioxide emissions by up to 43 percent by 2030. In real terms, that means preventing a cumulative 3.8 billion tons of CO2 from being emitted into the atmosphere, which is the equivalent of shutting down 98 coal-fired power stations.

Still, there are also weaker proposals on the table. One put forward by Japan and Norway would lower CO2 emissions from shipping by only 1-6 percent by 2030, while still allowing for emissions to grow above their current levels.

Given ever-growing public demands for climate action—not to mention new data pointing to the pace and severity of climate change—a weak approach simply is not good enough. Besides, tough efficiency regulations would not make trade more expensive, as some detractors claim, because they would lead operators to acquire more fuel-efficient vessels. Fuel is now the single biggest operating expense in shipping, which means that early adopters of technologies that reduce fuel costs can offer better freight rates and achieve a competitive advantage.

A more efficient shipping fleet would not only make international trade less oil-dependent; it would also help to insulate freight rates against future oil-price spikes, such as the one that led to destabilizing food riots around the world in 2008.

At any rate, the industry is ahead of governments on this issue. At a recent shipping industry gathering, industry representatives focused squarely on the question of how to power “global trade without the use of fossil fuels.” Moreover, many large shipping companies have already committed to commercializing full-size, zero-carbon vessels on deep-sea trade routes by as soon as 2030.

Beyond these current efforts, there are many promising new technologies being tested, from clever air-bubble lubricated hulls to wind-assisted propulsion and—crucially—carbon-neutral fuel types. When it comes, the shipping industry’s pivot to these fuels will generate massive investments in renewable energy in developing countries.

Finally, banks accounting for more than 20 percent of all loans to the shipping sector have committed to disclosing the carbon intensity of their loans every year, using transparency to drive capital toward more efficient ships and away from dirty ones.

Clearly, the private sector is stepping up. Now, governments gathering at the IMO summit in London need to do the same, by supporting clear, transparent, and ambitious short-term measures to reduce emissions. Only that can create the incentives for investment in zero-carbon technologies and carbon-neutral trade over the long term.

Pascal Lamy, a former director-general of the World Trade Organization and EU trade commissioner, is a Global Ocean Commissioner

STOCKHOLM, Sept 25: Swedish teenage climate activist Greta Thunberg was named on Wednesday as one of four winners of the... Read More...