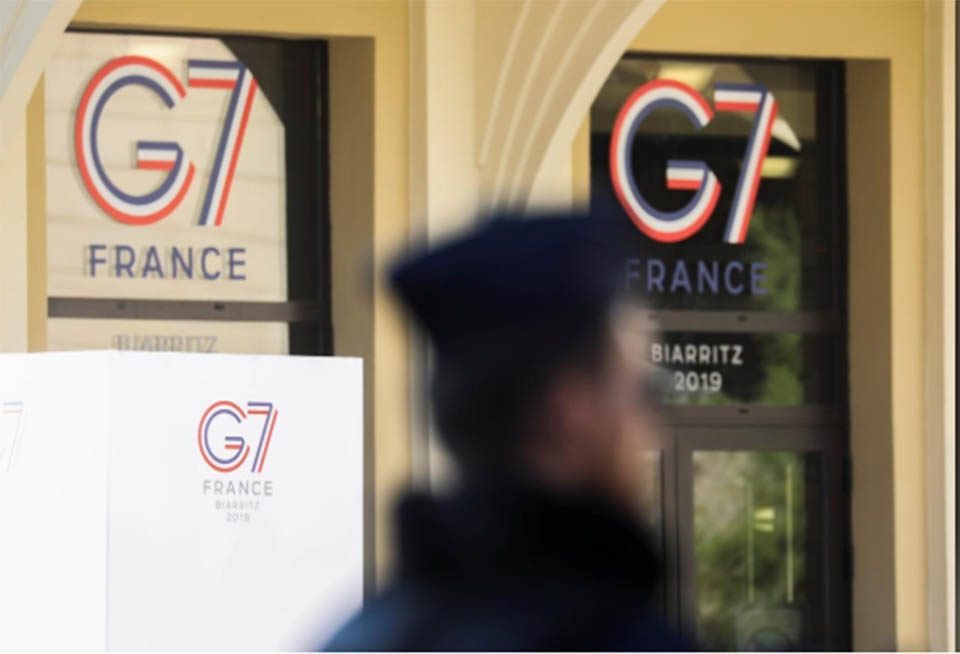 French policemen stand guard near the Grande Plage beach ahead of the G7 summit in Biarritz, France, August 22, 2019. REUTERS/Sergio Perez

PARIS, Aug 24: Leaders of the G7 nations arrive in France on Saturday for a summit as a brewing U.S.-China confrontation over protectionism highlighted President Emmanuel Macron’s tough task in delivering meaningful results on trade, Iran and climate change.

The three-day meeting in the Atlantic seaside resort of Biarritz takes place amid sharp differences over a clutch of global issues that risk further dividing a group of countries already struggling to pull together.

Summit host Macron wants the leaders of Britain, Canada, Germany, Italy, Japan and the United States to focus on the defense of democracy, gender equality, education and climate change, and has invited leaders from Asia, Africa and Latin America to join them for a global push on these issues.

But with the trade war between China and the United States escalating, European governments struggling to defuse tensions between Washington and Tehran and global condemnation growing over illegal fires in the Amazon, his agenda could be eclipsed.

U.S. President Donald Trump’s history of pugnacity at multilateral gatherings, which brought last year’s G7 summit to an acrimonious conclusion, means there is scant hope for substantive agreements. France has already decided that, to avoid another failure, there will be no final communique.

“French President Emmanuel Macron... bills the meeting as a chance to relaunch multilateralism, promote democracy and tame globalization to ensure it works for everyone,” Stewart Patrick of the Council on Foreign Relations wrote.

Trump’s walkout at the Charlevoix summit in Canada last year prompted foreign policy observers to dub the Group of Seven nations the G6+1.

U.S. officials said Trump would tout his policies of tax cuts and deregulation and press allies to follow his example to stave off problems with the global economy.

Hours before leaving for Biarritz, Trump reacted angrily to China’s move to impose retaliatory tariffs on more U.S. goods, even saying he was ordering U.S. companies to look at ways to close their operations in China. The president cannot legally compel U.S. firms to abandon China immediately.

“Our Country has lost, stupidly, Trillions of Dollars with China over many years,” Trump tweeted. “We don’t need China and, frankly, would be better off without them.”

China’s President Xi Jinping is not among the Asian leaders invited to the Biarritz summit.

Adding to the unpredictable dynamic between the G7 leaders are the new realities facing Brexit-bound Britain: dwindling influence in Europe and growing dependency on the United States.

Even so, diplomats played down the likelihood of Trump and Johnson joining hands against the rest, citing Britain’s close foreign policy alignment with Europe on issues from Iran and trade to climate change.

Johnson said ahead of the summit that Britain would not retreat from its responsibilities on the world stage after Brexit, nor sacrifice its belief in the global order.

The remarks were a riposte to those who say leaving the European Union will diminish Britain’s influence on the global stage and force a pivot toward Trump’s unorthodox and often confrontational approach to diplomacy.

France will deploy more than 13,000 police officers, backed by soldiers, to keep protesters away from the summit venue.

Macron will host a dinner on the waterfront on Saturday before the leaders get down to talks on Sunday and Monday on the global economy, tackling inequality and climate change.

Macron said Bolsonaro had lied in playing down concerns about climate change at a G20 summit in Japan in June, and threatened to veto a trade pact between the European Union and the Mercosur bloc of South American countries.

Greenpeace called the deforestation an emergency that highlighted the G7 leaders’ need to act on ending fossil fuels and protecting forests. “Once again, Emmanuel Macron is making bold statements which have yet to be matched by actions,” said Greenpeace France Executive Director Jean-François Julliard.

“France and other developed countries are responsible for the dire Amazon situation through their economies and contribution to imported deforestation, fueled by ill-designed policies in sectors like agriculture, timber and bio-energies.”

A French diplomatic source said advisers to the G7 leaders were working on concrete initiatives to respond to the fires.

Let's not overshadow the issues that Prem Archaya tried to raise: Dr Toshima Karki
7 minutes ago