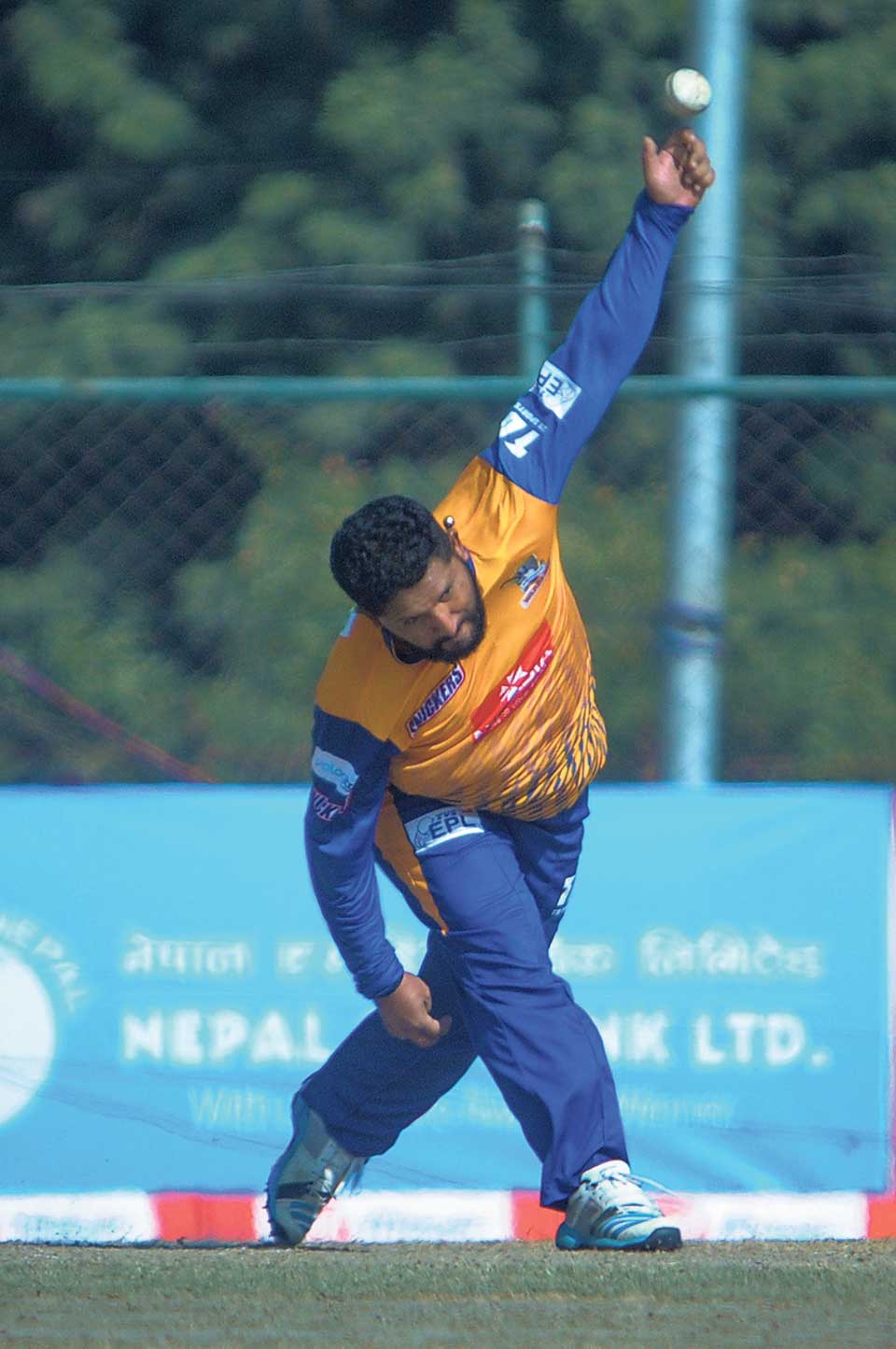 KATHMANDU, Dec 26: Bhairahawa Gladiators has secured its berth in the play-off of the Everest Premier League (EPL) Twenty20 Cricket Tournament, with a seven wickets win over Pokhara Rhinos on Monday.

Gladiators have now acquired six points from four matches to stay at the second position in the six-team contest. Since the top four teams from the league round earn places in the play-off, Gladiators became second team to do so along with table topper Biratnagar Warriors.

Earlier in the first match of the day, Biratnagar Warriors registered an eight-run win over Kathmandu Kings XI. The unbeaten side, Warriors, has now 10 points from five matches to stay at top of the table comfortably.

At the Tribhuvan University Cricket Ground in Kirtipur, Rhinos won the toss and chose to bat before making a total of 108 runs losing all the wickets in 18.3 overs. In reply, Gladiators reached to 110-3 in 17.4 overs.

Only three batsmen managed to double digit figures for Rhinos while two others were out for the duck. Opener Israrullah was the top scorer for the Pokhara-based side with 40-ball 41, while his partner Sunil Dhamala made 15 runs off 16 balls. Likewise, Asif Ali (10) and Nurdhoj Sen (7) were the other notable contributors, while Binod Bhandari and Rajesh Pulami Magar failed to add any run.

Meanwhile, winning side Gladiators failed to make positive start with its openers Pradip Singh Airee and Pratham Salunke creating just a seven-run partnership for the first wicket. Airee was dismissed for two runs while Salunke Managedto made 12-ball 25 that included six boundaries. Vesawkar tried to rescue the innings by smashing 32 runs in 37 deliveries, while unbeaten Aarif Sheikh made 47-ball 48 with three sixes and three boundaries.

After facing the second defeat in the tournament, Rhinos now find itself in the third place with four points from equal number of matches.

In the first match of the day, winning team Biratnagar Warriors was invited for batting after losing the toss and made a total of 147-7 in the allotted 20 overs. In reply, Kathmandu Kings XI managed to reach 139-9 in 20 overs.

An all-round performance from Anshuman Rath, was crucial for Biratnagar Warriors to pick its fifth win of the competition.

Kings XI’s Amar Routela took two wickets for 37 runs while Captain Farveez Maharoof and Sompal Kami added one wicket each for the losing side.

Mahroof was the highest scorer for his team as he made 37-ball 42 but that wasn’t enough to save his team from the fourth defeat of the tournament. Naresh Budayair made 42 runs while openers Amit Shrestha and Sagar Pun were dismissed for six and 13 runs respectively.

Man-of-the-match Rath was supported by Basant Regmi and Ram Naresh Giri in the bowling department as the latter two claimed two wickets each. Captain Khadka and Karan KC picked one wicket each for the wining team.

Kings XI has acquired just two points from five matches and sits in the fifth place.

On Tuesday, second-placed Gladiators will take on bottom team Chitwan Tigers in the first clash of the day. Later on the same day, Rhinos and Lalitpur Patriots will face each other. Rhinos and Patriots have four and two points respectively earned from four matches and Tuesday’s fixture will be important for both teams as they need full two points to stay in the contest for top four.

KATHMANDU, Dec 30: Biratnagar Warriors will be hoping to upset Bhairahawa Gladiators once again as the two teams face each other... Read More...

President Bhandari emphasizes on role of law education for promotion of rule of law
34 minutes ago
Rs 10,000 fine slapped on Rajpur's mayor for not providing information
49 minutes ago