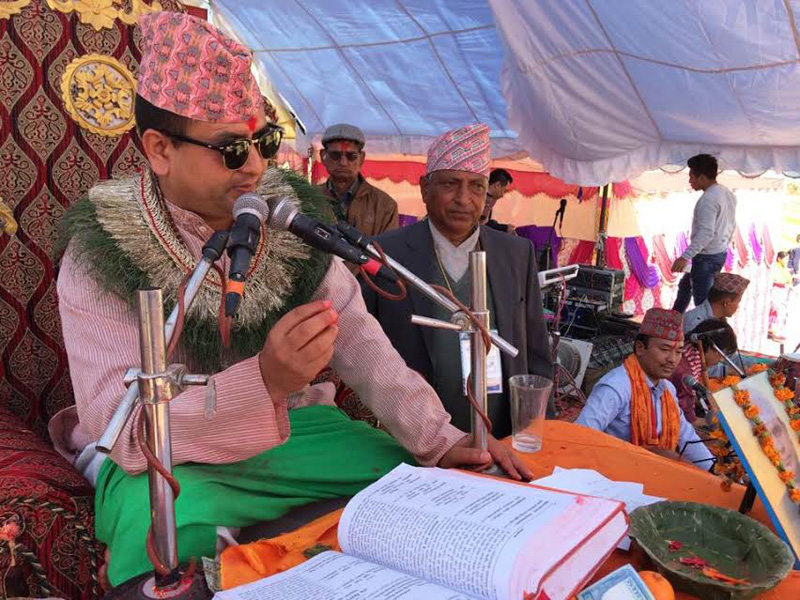 Generating resources locally and deploying them in a sustainable way warrants both strategic planning and clarity of purpose
Gyan Singh Tharu, who works as a peon at the Mahendra Campus at Bharatpur, Dang, decided to donate over Rs one lakh to construct a new building at the Padmodaya Public Model Higher Secondary School in Dang where he had his initial schooling. The school (where I also studied) invited Pundit Dinbandhu Pokhrel to conduct Srimad Bhagavad Mahayagya in January to raise funds to construct a new building to launch vocational courses for its students. Thanks to donors like Tharu, the school was able to raise Rs 35 million, mostly from local donors, incumbent and former teachers, staff and students.

While reciting from holy texts, he highlights the virtue of ‘daan’ (donation) and motivates local community to donate for local causes. His late father (who was killed during the Maoist insurgency) and Pundit Dinbandhu have thus collected millions of rupees by conducting ‘mahayagyas’ in different parts of the country.

Though Nepal is passing through rapid political, economic and social changes, the society by and large still remains deeply rooted in its centuries-old socio-cultural norms. While such norms, at times, are blamed for discrimination based on gender, caste and race, the positive aspect is that they seem to promote strong family values as witnessed during the large outflow of people from Kathmandu valley to meet their parents in the districts during the Dashain festival. The same spirit encourages people to make donations to various social causes.

As millions of Nepali youths are working abroad, a number of NGOs and charities are trying to tap their potential. The Non-Resident Nepali Association (NRNA), which has chapters in 75 countries around the world, has asked all of its chapters to carry out at least one charity work every year. There are over 200 organizations of expatriate Nepalis in the UK alone and they usually organise summer barbecue or charity dinner to raise funds to support local schools, health posts or buy an ambulance to send to Nepal.

Power of social media
Back home, young generation of Nepalis are experimenting with social media to generate funds as well as volunteers. In the aftermath of the devastating 2015 earthquakes that killed nearly 9,000 people, many NGOs and voluntary organizations collected relief materials at short notice and distributed them among quake-affected communities in central and western Nepal. While many INGOs have been criticized for spending more in overheads and training and counselling sessions, local volunteers played a crucial role in reaching out to affected communities and helping them in whatever way possible.

Mobilizing volunteers and resources during a calamity like an earthquake is one thing, but generating resources locally and deploying them in a sustainable manner for specific purposes is a different matter. It warrants both strategic planning and clarity of purpose to organise such activities.

More important will be to know what resources the community already possesses and how to mobilize them for a common, public good. And, there are individual traits also.

In his book Give and Take, Adam Grant discusses three types of people: givers, takers and matchers. According to Grant, givers prefer to give more than they get while takers like to get more than they give. Matchers, for their part, strive to preserve an equal balance of giving and getting. So how could givers be distinguished from the rest? “(Giving) just involves a focus on acting in the interests of others, such as by giving help, providing mentoring, sharing credit, or making connections for others,” says Grant. In this dog-eat-dog world, many believe that you have to strive to move ahead at the cost of others. But, Grant insists that givers can get to the top of their organization or institution by helping out others.

Osho, the Indian spiritual leader, once declared, “The more you give, the more you get; that’s the law of the nature.” But, how could we be a ‘giver’? In his book Giving:  How each of us can change the world, former US President Bill Clinton suggests that gifts of time, skills, things and ideas are as important as contributions of money. “There’s so much to be done, down the street and around the world. It’s never too late or too early to start,” he adds.

In the Nepali community, the act of giving has always been considered super sacred. When you are giving away something your hands are always above the hands of the takers, and the belief is that giver is always superior.

But to be entirely superior, the act of giving has to be selfless and without any hopes of return—except perhaps the reward of happiness it generates. Being selfless is not an easy option. One has to overcome all sorts of self-interests to reach such a state of being.

Wherever we are, perhaps the time to be a giver—within our family, community and beyond—is now.

And, connection to our roots—as being championed by preachers like Pundit Dinbandhu Pokhrel and followed by people like Gyan Singh Tharu—could sustain such a tradition for generations to come.

“In order to invite change, one should have the audacity to fight the status quo,” asserts Meera Dhungana, Advocate and... Read More...

Dozens of bridges on verge of giving way

DHANUSHA, Dec 28: More than a dozen bridges in Dhanusha and Mahottari section along the East West highway have worn... Read More...

Salaries and allowances of Speaker, Deputy Speaker withheld until court’s decision
9 minutes ago

Political practice of the past one and a half decades has established the inevitability of course correction: Ex-King Shah
39 minutes ago