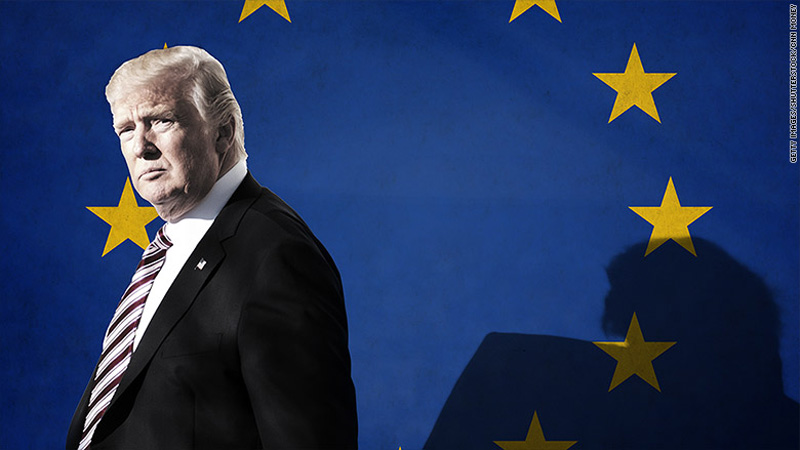 Ironically Donald Trump may prove more of a help than a hindrance for a common defense structure in Europe
At a recent conference in France, a number of Europeans surprised their American guests by arguing that US President Donald Trump might be good for Europe. With Trump back in Europe for the G20 summit in Hamburg, it’s worth asking whether they are right.

By most accounts, Trump’s presidency has been terrible for Europe. He seems to disdain the European Union. His relationship with German Chancellor Angela Merkel is cool in comparison to his friendship with Turkey’s authoritarian president, Recep Tayyip Erdoğan, or his admiration for Russian President Vladimir Putin.

Moreover, Trump welcomes Britain’s looming exit from the EU; upon meeting Prime Minister Theresa May for the first time, he is alleged to have asked enthusiastically, “Who’s next?” Finally, Trump only belatedly reaffirmed NATO’s Article 5 (which pledges mutual defense); he withdrew the US from the Paris climate agreement, which is very popular in Europe; and he has cut US funds for the United Nations, which has strong European support.

Not surprisingly, Trump is personally unpopular across Europe. A recent Pew poll indicates that only 22 percent of Britons, 14 percent of French, and 11 percent of Germans have confidence in him. But this very unpopularity—more anti-Trump than anti-American—has helped to reinforce European values.

Earlier in the year, there was a fear that a rising tide of the type of nationalist populism that brought Trump to office and led to Brexit might be about to sweep Europe, even giving the far-right Marine Le Pen the French presidency. Instead, the populist wave seemed to have crested with Trump’s election. Since then, populists have been defeated in Austria and the Netherlands; the French elected Emmanuel Macron, a centrist newcomer; and May, the champion of a “hard” Brexit, lost her parliamentary majority in last month’s snap general election.

Europe still confronts the slow growth, high unemployment, and political disunity that have plagued it in the decade since the 2008 global financial crisis. But whoever wins the German election this September will be a moderate, not an extreme nationalist, and will understand the importance of working with Macron to restart the Franco-German engine of European progress.

The Brexit negotiations promise to be complex and contentious. For “soft Brexiteers,” who want to preserve Britain’s access to the European single market, the problem is that the Brexit vote mainly reflected concerns about immigration, not about the minutiae of the single market’s rules. Yet Europe refuses to allow goods and services to flow freely without free movement of people. Some three million Europeans currently live in Britain, and a million Britons reside in Europe.

A possible compromise could be found by creating a new Euro-British entity, one that would guarantee the rights of both sides’ citizens while allowing some limits on immigration as well as on some goods. One could think of this entity in terms of concentric circles, with free movement characterizing the inner circle of the EU and constraints allowed in the outer circle.

Whether such compromises will be possible depends upon European flexibility. In the past, Europeans have talked about allowing “variable speeds” toward the implied goal of “ever closer union.” This federal goal would have to be replaced, and a metaphor of different levels would have to replace that of different speeds.

Many Europeans elites have already become more flexible regarding Europe’s future and have moved past the federalist goal to envision a European entity that is sui generis. They point out that three different levels of participation already exist in Europe: the customs union, the euro currency, and the Schengen Agreement on the removal of internal borders. Defense could become a fourth.

In the past, European progress on cooperation in defense has been inhibited not only by concerns about sovereignty, but also by the security guarantee offered by the United States. With Trump raising doubts about American reliability, the security issue has moved to the foreground.

Efforts to build a common European defense system have begun, but the process is slow.

Other than Britain, only the French have major expeditionary force capabilities, while Germany has been inhibited by history from doing more. And Britain was always reluctant to do anything that might compete with NATO. But these attitudes are beginning to change.

Again, the image of concentric circles can help. In the run-up to the Iraq war in the early 2000s, some argued that, in terms of security, Americans are from Mars, while Europeans are from Venus. But the world has changed, and Europe now faces a series of external threats. Russia’s attacks on Georgia and Ukraine have reminded Europeans of the dangers they face from their large neighbor. Deterring Russia will still require a strong NATO.

Another set of threats, however, could come from violence in the Balkans. Some observers believe that civil war was only narrowly averted recently in Macedonia. A European peacekeeping force could make a major contribution to stability in the region.

A third set of threats to Europe originates in North Africa and the Middle East. Libya is in chaos and the source of dangerous Mediterranean voyages by desperate migrants, and one can also imagine the need to protect citizens or rescue hostages in the region. Here the French expeditionary capability, perhaps coupled with Britain’s, could help provide security. Even if Britain does not participate, other Europeans could help, as Germany now does in dealing with terrorism in Mali.

Europe is a long way from a common defense structure, but the need is growing. And, ironically, the unpopular Trump may prove more of a help than a hindrance.

The author is a professor at Harvard and writer of ‘Is the American Century Over?’

Europe in Time of Trump

The transatlantic alliance, which for decades has safeguarded the West, is under severe strain. US President is responsible for... Read More...