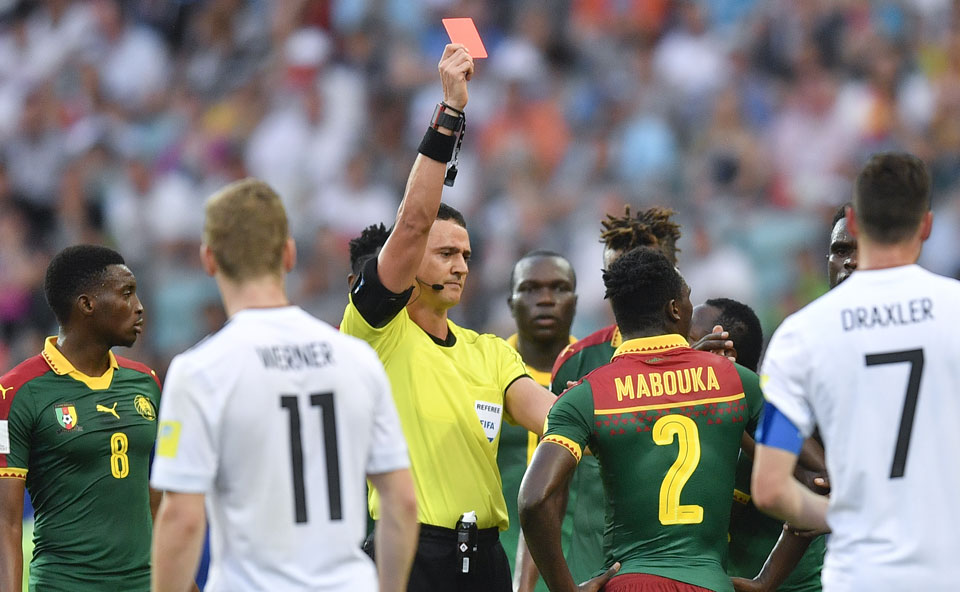 Referee Wilmar Roldan shows a red card to Cameroon's Ernest Mabouka during the Confederations Cup, Group Bfootball match between Germany and Cameroon, at the Fisht Stadium in Sochi, Russia on Sunday. Photo: AP

SOCHI, June 26:  World champion Germany reached the Confederations Cup semifinals on Sunday with a 3-1 victory over a Cameroon side reduced to ten men after further confusion with experimental video replays.

Germany was leading through Kerem Demirbay's 48th-minute strike when a case of mistaken identity halfway through the second half that replays were meant to eradicate left the African champions bemused and irritated.

Sebastien Siani was dismissed for a foul challenge on Emre Can after referee Wilmar Roldan inspected a pitch-side monitor.

It took furious protests from the Cameroon players, including Siani sarcastically applauding Roldan, for the Colombian to check the monitor again and discover he had sent off the wrong player. Siani was called back on and Ernest Mabouka was correctly sent off.

"The referee did not give any explanation," Cameroon coach Hugo Broos said through a translator. "It's a foul, fair enough but both players had their legs high up to reach the ball. I don't understand why only my player received a red card."

Germany extended its lead two minutes after the red card courtesy of a diving header from Timo Werner. There were flickers of a comeback by Cameroon when Vincent Aboubakar's flicked header slipped through Marc-Andre Ter Stegen's raised hands. But Werner netted again in the 81st minute to secure a 100th victory for Joachim Loew in his 150th match in charge of Germany.

By securing top spot in Group B of the World Cup warm-up tournament, the inexperienced Germany squad playing without many of its 2014 World Cup winners will now stay in the Black Sea resort of Sochi and play Mexico on Thursday.

The other semifinal on Wednesday sees Portugal play Chile, which finished second in Group B after drawing 1-1 with Australia in Sunday's other game.

The Germans will have to display greater urgency against Mexico than they did in the first half against Cameroon. Loew's side was wasteful, with wing back Joshua Kimmich sending a diving header wide, and largely restricted to attacking down the flanks.

Ter Stegen prevented Cameroon going in front, with the goalkeeper's one-handed save blocking Andre-Frank Zambo Anguissa's hooked shot across goal at the end of a nervy first-half for the Germans.

"Some of my players have no experience and were nervous because one mistake could have eliminated us," Loew said through a translator. "It's good to see how we were able to ... up the ante."

Taking the lead in slick fashion. Julian Draxler fed Demirbay with a back-heel through Siani's legs and the midfielder marked his first international start by slicing a shot into the top corner with his weaker right foot.

Then came the red-card confusion, swiftly followed by Germany's second goal. Werner evaded Adolphe Teikeu to meet a cross from Kimmich and open his international account with his stooping header.

The blunder by Ter Stegen for Cameroon's goal should concern Loew. It was the latest by a Germany goalkeeper in the World Cup warm-up tournament. Bernd Leno was also at fault for Australia's two goals in Germany's 3-2 victory in its Group B opener.

But Werner restored Germany's two-goal cushion. The striker whose goals propelled Leipzig to a surprise second-place finish in the Bundesliga turned a cutback from Benjamin Henrichs into the net.

"He has a killer instinct," Loew said.

Cameroon leaves Russia early and might not be back next year, given its struggles in qualifying.

"We are one of the best teams in Africa but there is still a difference between us and modern football," Broos said. "We see the proof of that, that there's a lot still to be done."

JHAPA, May 7: The pre-tournament favorites of the Damak Cup Ruslan Three Star Club has been knocked out from the first... Read More...