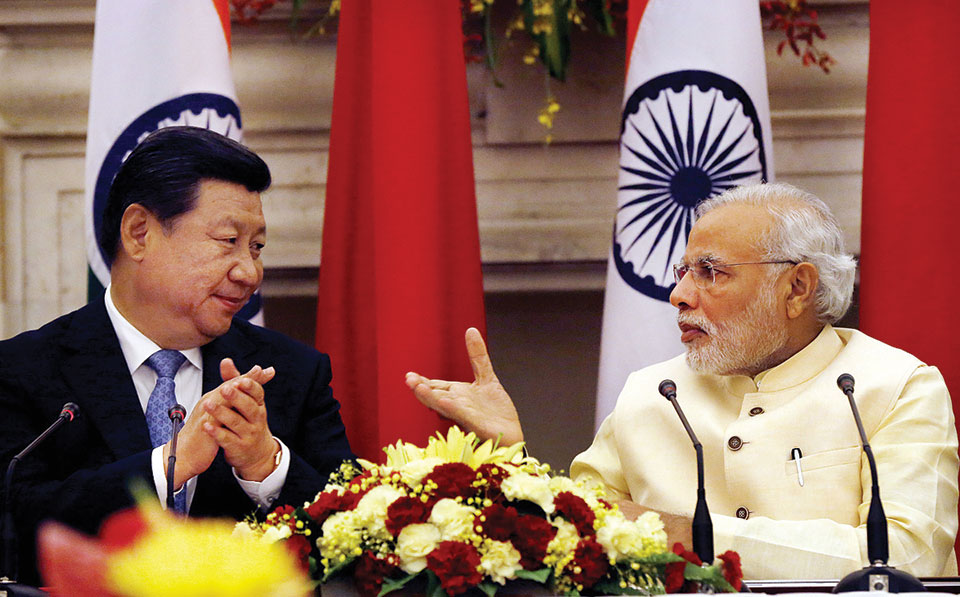 India is playing against Chinese interest in South Asia. This may be one reason Sushma Swaraj visited Nepal to meet Oli, ‘pro-China’ leader

Indo-China rivalry in South Asia is not new in history. It brewed up again after President Xi Jinping’s Belt and Road Initiative (BRI) focusing on India’s neighborhood in South Asia. Although Prime Minister Narendra Modi initially promised to improve relations with its neighbors he went for ‘act east’ policy dealing each country on bilateral and multilateral basis. India has major trade relations with China and likely to continue in the days to come, but it is unlikely to join China’s BRI which it considers as violating its sovereignty.

India has serious reservation as China-Pakistan Economic Corridor (CPEC) passes through disputed territory of Aksai Chin and Kashmir. It sees BRI as important tool for those South Asian countries which are not capable of building their own infrastructures. On the contrary, Prof Dr Lee Tao of Sichuan University recently revealed in a program in Kathmandu that BRI is devoted to policy coordination for infrastructure development, enhance connectivity, and improve trade and economic partnership through people to people relations.

The connectivity is based on transportation network that is developed over a geographical sphere. China connects five out of eight South Asian countries like Afghanistan, Pakistan, India, Nepal and Bhutan. The total borderline extends more than 5000 kilometers with it. China-Afghanistan and China-Pakistan border passes through adverse topography whereas China has no diplomatic relations with Bhutan.

China-India border is embroiled with political wrangling so China-Nepal border that extends 1004 hundred kilometers is much easier and lucrative. There are altogether 312 routes identified to join Tibet with South Asia out of which 184 passes through Nepal. Hence, Nepal can be a bridge between South Asia and China, said Dr Lee Tao.

As a country of unique cultural and religious amalgamation among Hindus, Buddhists and Muslims and lying between two distinct tribes of Turbo-Barman and Aryans, Nepal could serve as a link between two huge civilizations of Asia. But this has not happened.

India has strong influence on Nepal’s politics. China is emerging economic power next to the US but India has been heavily influenced by US to play against Chinese interest in South Asia. This may be the reason why Indian Foreign Minister Sushma Swaraj visited Nepal hastily to meet KP Sharma Oli—who is perceived by India as ‘pro-China leader’ after five months long economic blockade India imposed in 2015—before he became the prime minister.

Doklam crisis was the result of cumulative Indo-China rivalry of the past. The road construction has not been stopped in the disputed territory. In absence of clearly demarcated border as well as Line of Control (LOC), chances of border skirmishes will always be there. As Nepali Gorkhas are still serving in Indian Army, Nepal is concerned if they will be deployed in the frontline to fight against China. How will Nepal tackle the situation internally to manage public anger as well as externally justifying Nepalis are not used as mercenaries?

Excluding China
Recently, the US issued a new National Security Strategy (NSS) in which it called Russia and China as ‘revisionist powers’ and used new term ‘Indo-Pacific’ instead of ‘Asia Pacific’. This description of oceanic-continent as specific oceanic territory is telling. If ‘Indo-Pacific Ocean’ was used it would mean different thing. ‘Indo-Pacific’ seems to be used to exclude China. Perhaps the US tries to stretch this region from the west coast of India to the western shores of the US to bring a different sense of common strategic look.

After formal exit of the US from Trans-Pacific Partnership (TPP) in which neither China nor India was the member, China would have been much happier to promote its regional trade proposals like Free-Trade Agreement of the Asia-Pacific (FTAAP) and Regional Comprehensive Economic Partnership (RCEP). The failure of TPP had negative trade impact mostly to the countries like Japan, Australia, Philippines, Vietnam, Singapore, and some South American countries like Chili.
TPP had no direct trade impact on South Asian countries but its failure raised the new hypothesis of ‘Asian NATO.’ Some intellectuals interpret it as US, Japan, Australia and India wanting a peaceful and prosperous Indo-Pacific with unhindered trade. China is seen as obstructing entire trade route with its ambitious maritime Silk Road. Hence, Quadrilateral Security Dialogue (QUAD), official level talks on the sideline of the ASEAN Summit meeting in Manila, has taken place to balance China’s growing assertiveness. This endeavor has been provoked as ‘Asian NATO’ to irritate China, nothing else.

Big powers should avoid such hypothesis. The author is a security and strategic analyst

The foreign policy of independent India is no different to that of East India Company it has come to despite... Read More...