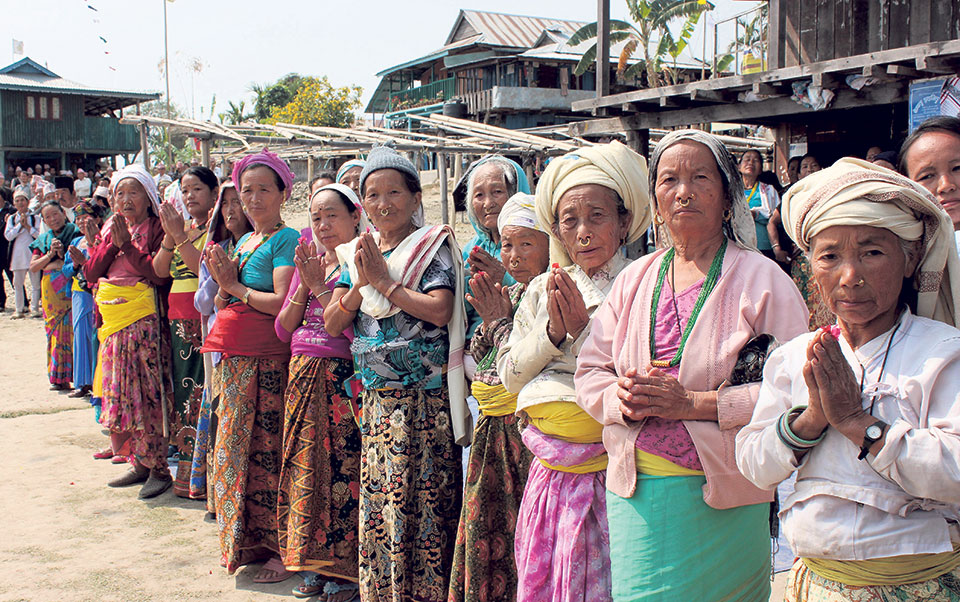 Women of Bajho village of Ilam take part in a formal program on Wednesday.

ILAM, March 8: Bishnu Dahal, 73, has been actively advocating gender equality for two and half decades. Her informal leadership in this field spans double the time. However, she feels, gender gap is still very wide in the society.

“I had been invited to participate in a program tomorrow. But I have refused to go,” she said. “I have been participating in rallies and seminars, chanting slogans demand equal space for women for decades. But in reality, our society is still far behind,” she added.

Whatever systematic changes have been seen over the years are indeed achievements towards ensuring women's rights, she says. However, until and unless the society is ready to treat women on par with men, equal space cannot be a reality, Dahal notes.

“If we go by constitution, our space is reserved. In politics, higher participation of women is seen. However, this is not significant yet. Women's perspective, their voice, their sentiments have not yet received their due space,” she noted.

Dahal puts the blame on both the men and women for this. On one hand, men are reluctant to change their mindset towards their female counterparts and on the other hand, women themselves have not dared to break the barriers and claim their rightful space. She believes that real change can be possible only when both the genders internalize that gender equality is necessary for the overall good of the society and the country.

“It is clearly seen that the leaders at the helm have not yet tried to bring women into the mainstream. They provide space for women only for namesake. And on the other hand, women themselves are not doing enough to push themselves forward,” Dahal maintained.

Dahal has been associated with Nepal Woman Association (NWA) for a long time. She was among the nominees for PR candidate in both first and second constituent assembly and in the recent Federal Parliament election. However, she was not made a lawmaker in all those occasions.

“I have devoted my whole life to women's welfare. Yet, my party, Nepali Congress could not trust me. I was not given the chance to represent women's voice. There are many deserving women like me who have been deprived of the opportunity to rise,” Dahal claimed.

She believes that political parties or the top politicians have taken decisions that favor women empowerment only because of compulsions. Or else, they are not sensitive to gender balance.

“If there had been no mandatory conditions to bring women forward, they would hardly get any seat in the parliament or in the local level bodies. Since the constitution has mandatory provisions, it forced political parties to have women candidates. Political parties did not field women for the post of mayor. But they fielded women for the post of deputy mayors to fulfill constitutional provisions. It was a compulsion,” she explained.

She believes that real change can be possible only when both the genders internalize that gender equality is necessary for the overall good of the society and the country.

Dahal feels that a day where a son and a daughter can feel equal in this country is still far away. She cited the patriarchal social structure and the citizenship laws as the stark signs.

Other women activists hardly express a different view. Their reading is that the legal provisions regarding women might have changed to some extent, but their condition is yet to improve.

Former lawmaker Sakuntala Lepcha laments that 'the achievement gained in the past, right after the Maoists coming to the peaceful politics has actually diminished in the recent years. “We could not keep the change or the spirit intact. There was a time when we felt really elated as all kinds of discrimination seemed to have collapsed,” she said. “The constitution has guaranteed our rights. I am not oblivious to that. But our mindset has not changed, and there are strong barriers for us to really claim our space,” she added.

Woman activist Tika Ghimire emphasized on better education and employment opportunities for women for empowering them in the real sense. “Few women in the high posts do not represent the actuality of women empowerment. Better positions for women can be ensured only when they are educated and employed,” she said.

Infographics: Achieve gender equality and empower all women and girls

Imagine a world with gender equality

We are living in the era where people have started thinking rationally; we have modernized not with technologies, but with... Read More...