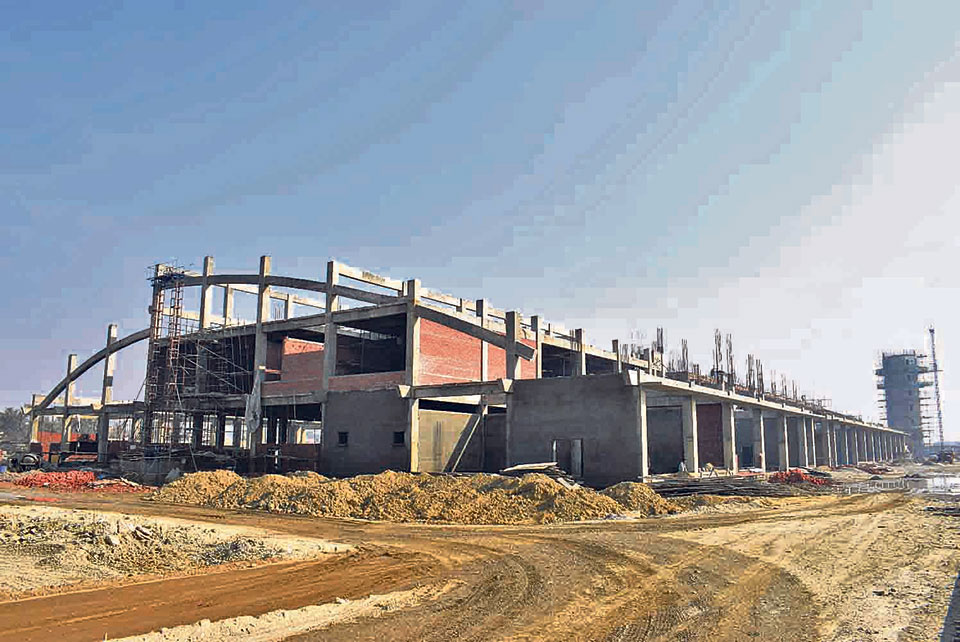 BHAIRAHAWA, Feb 7: If everything goes as planned, the Gautam Buddha International Airport (GBIA) is likely to operate from June 28 this year. The airport authority is scheduled to launch its first test flight on the date.

The project had kicked off in 2014. Five years on, it is gearing up for the test flight, Prabesh Adhikari, chief engineer of the project said.

According to Adhikari, the construction of the airport is being on a war footing in order to meet the deadline. All major infrastructures have been built and only minor works are left he said.

"We are very hopeful that we will be able to meet the deadline for the test flight. If everything goes well, we will definitely be able to operate the airport from that day," he said in excitement.

We are very hopeful that we will be able to meet the deadline for the test flight. If everything goes well, we will definitely be able to operate the airport from that day. - Prabesh Adhikari, chief engineer of the project

Over 65 percent of the construction has been over, according to Adhikari. And in the coming four months, the rest of the work would be completed.

He informed that the presently the runway is being constructed and blacktopped. The 3,000-meter long and 45-meter wide runway will get final touch soon, he said.

"We have a strict time frame. As we follow that, we are going to construct and blacktop the runway very soon. Other major works have almost been over," said Adhikari. He added that work on multiple components of the project are being carried out simultaneously.

A glance at the construction site does not suggest anything different either. Locals who have been observing the developments closely are elated too. They are elated with the completion of the project stating that it will give an economic face-lift to their region.

"The development, as you can see, is very impressive. Though it was slow in the past, now it has picked up the pace," said a local of Bhairahawa. He said that the local residents have been waiting long for the airport to come into operation.

"We are working on the control tower and a few other structural components of the project. We have completed the construction of the terminal building and other major parts of the project," Adhikari said.

Work is going on on the final storey of the control tower. Along with that finishing and laying of marbles on the floor is going on in several areas of the airport, he said.

"We are conscious about standard flooring requirement for the airport and we are presently working on it," said Adhikari. "We have brought all the materials required for the roof of the terminal from India and we will be constructing it very soon," he added.

Electricity stations, fire control room, water tank and residence for defense personals are some other components of the projects whose construction is presently being done in full swing.

Similarly, the construction of the entrance and the exit gates are near completion.

"Around 20 percent of work related to electricity and 15 percent related to other civil projects are left now," Adhikari said.

Along with building physical infrastructure, technical works are also underway. Equipment required for setting up the air traffic control room is being procured. "We have already initiated process to procure that and we expect to have all the equipment very soon," he added.

The airport's cargo building alone is being constructed at the cost of around one billion rupees. Issues, whenever they emerge, are being addressed by concerned authorities promptly, according to Adhikari.

The airport which spreads over 10,000 ropanis of land is one of the pride projects of the government and sits on its topmost priorities. The airport is expected to serve for 50 years.

"Every construction material used in the project is lab tested to ensure it is of the highest quality. We have not compromised in quality," Adhikari said.

Earlier the estimated cost of the project was 6.2 billion. However, over 6. 8 billion has already been spent for the project, according to Adhikari.

KATHMANDU, March 20: The British Council has completed 60 years of its operation in Nepal. ... Read More...