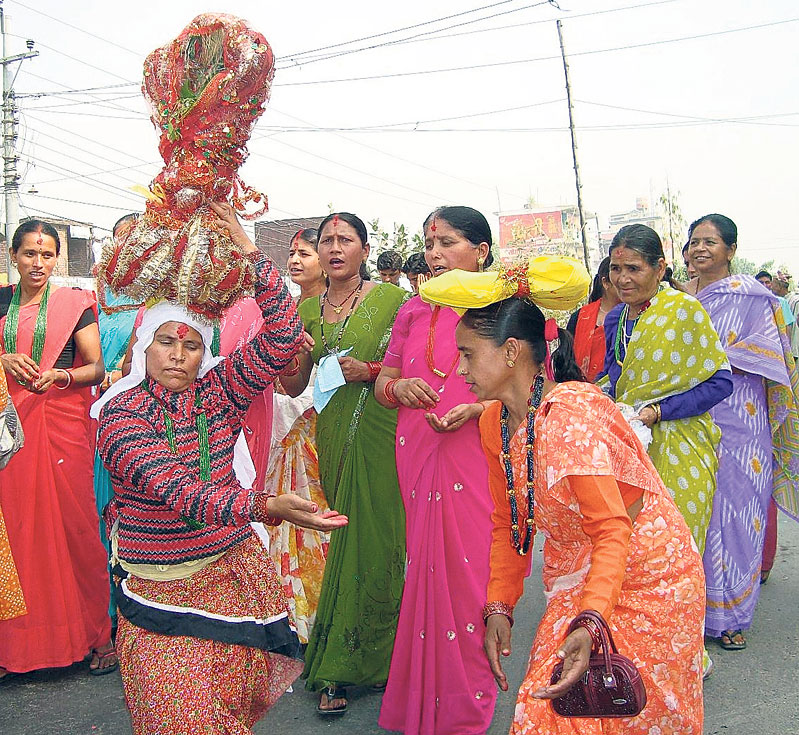 Women dance during the Gaura festival in this file photo.(Republica Files)

BAITADI, Aug 22: The Gaura Festival has begun in the Far-West including Baitadi today.

The festival, one of the most famous in the region, normally falls in the Nepali month of Bhadra (August/September) according to lunar calendar and is also celebrated in some districts in the Mid-West as well as Kumaun in India.

On the first day of this four-day festivity, women, married or single observe fast and worship Goddess Gauri, the consort of Lord Shiva.

It is traditionally believed that she who fasts during this period is blessed with a doting and devoted spouse, said Daya Krishna Pant, a local priest.

One of the attractions of this festival which is observed with more fervor than the Dashain in the Far-West is Deuda Dance, where the participants hold hands and form a circle and sing and dance.

Other features include Chaita, Dhamari dances and games where the participants sing their woe and weal in song as well as parody the anomalies and aberrations prevailing in the society.

Love birds take this festival as an opportune pretext to pledge their love. The festival is also believed to appease the family deity and adds to the peace and prosperity in the family. RSS

BHAKTAPUR, July 17: A month-long religious festival has kicked off at the Hindu temples-- Doleshwor and the Ashapuri Mahadev--based in... Read More...

KATHMANDU, April 4: Art has no language. It directly enters the hearts of the people, and does not need the help... Read More...

Thai-Nepal Festival kicks off in Kathmandu