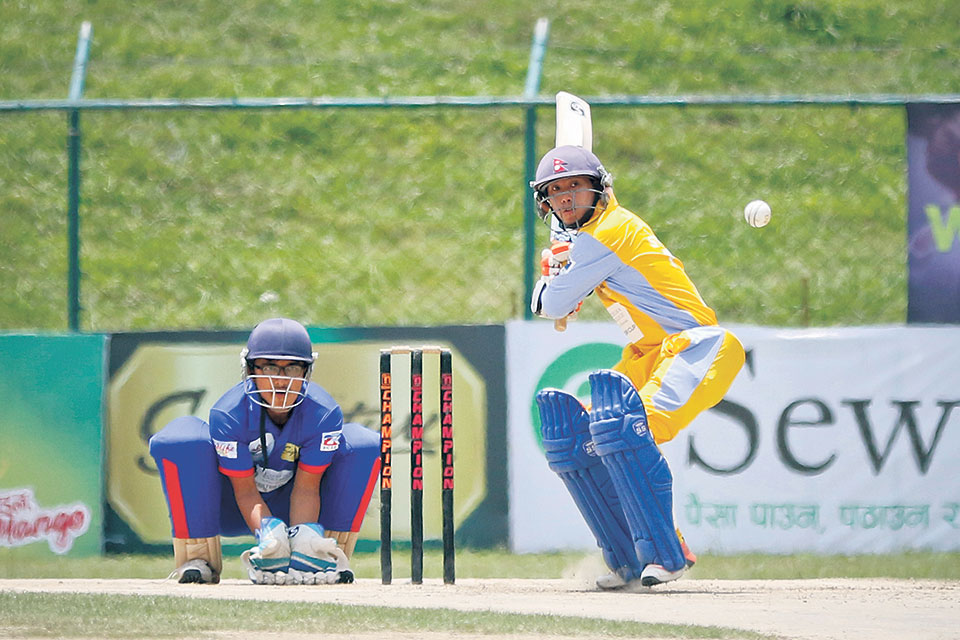 Shankhar Rana of Province 5 bats as wicket keeper Rabindra Jung Shahi of Province 6 looks on during a match of the Inter-provincial Prime Minister Cup cricket one day tournament at the TU Cricket Ground in Kirtipur on Sunday.

KATHMANDU, June 4: Skipper Shakti Gauchan picked up three wickets, opening the bowling for Province 5 and forcing Province 6 to bundle-out for paltry 55 runs in 22.5 overs in the ongoing Inter-provincial Prime Minister Cup at Kirtipur on Sunday.

Leg-spinner Bikram Bhusal and opening pace bowler Krishna Karki notched up three and two wickets respectively to propel Province 5 on the third position of Group B table. The chase was completed with 236 balls to spare, a new record in the PM Cup cricket.

Province 6 was invited to bat first after Gauchan won the toss in their second game of the tournament. The first match was abandoned due to rain at Mulpani Cricket Ground. The veteran left-arm spinner dismissed Prakash Jaishi and Dinesh Pun in the fourth over, both for ducks, as Province 6 further sunk into trouble losing the next three wickets adding only 5 runs to the total. The situation was torrid for the batting team that lost 5 wickets for 8 runs at the end of 6 overs. Gauchan had bowling figures of 6-3-4-3 in the match. Karki conceded 11 runs in 6 overs picking up two top-order wickets of in-form Province 6 skipper Rabindra Jung Shahi (7) and left-handed batsman Tek Salami (1).

VIjaya Bista of Province 6 made 17 runs to bring some respect to the total, which did not last long as Bhusal ran through the middle order with his three-wicket-haul turning the ball both ways. Spinner Lal Adhikari also chipped in with two wickets to add up to the Province 6 batting misery.
In reply, Province 5 openers Sandeep Sunar and Shankar Rana shared a quick-fire partnership of 54 runs to take them home in the 11th over. Rana made brisk 29 runs from 31 deliveries before being dismissed by Salami after several stumpings were missed by skipper Shahi behind the wickets. Sunar stayed unbeaten on 27 runs from 30 deliveries. Both the opening batsmen scored six boundaries each.

Shakti Gauchan was adjudged the man of the match. Province 5 is on 3 points after two matches, behind Nepal Police Club on the second spot and table-topper Province 7 with five points. Province 6 is knocked out of the tournament with one point after four matches.

Departmental team Tribhuvan Army Club completed a meager chase of 77 runs in 16.4 overs against Province 4 with 200 balls to spare to seal their spot in semi-finals of Inter-provincial Prime Minister Cup at Mulpani on Sunday.

Province 4 won the toss and elected to bat first. After a patent start of 24 runs for the first wicket, the provincial team lost 10 wickets for 52 runs as opening batsmen Anil Gurung was left stranded at one end scoring 42 runs. He was he only double-digit scorer in the innings when he fell as the 8th wicket of the match. He managed seven boundaries in his 90-ball stay at the crease. Six batsmen were dismissed for ducks including Hari Chauhan, Suman Ghimire and Bipin Khatri.

In reply, Pun smashed a brisk cameo of 28 runs from 33 deliveries which included one boundary and two sixes before being stumped by Govinda Pradhan. The other opening batsman, Anil Mandal then steered the chase reaming unbeaten on 28 runs with three fours. Naresh Budhayer scored 10 when the Army completed the chase with 200 balls remaining.

Sagar Pun was adjudged the man of the match for his all-round impact in the match.
The Army has six points after three matches and has sealed their spot in semi-finals of the PM Cup. Meanwhile, Province 4’s journey is over with only one win in four group matches. Armed Police Force Club has four points from two matches and Province 2 has two points from three matches with a match to go. Both teams will clash on Monday for potential semi-final spot at Kirtipur. Similarly, in Group B encounter, Province 5 will take on Province 3 at Mulpani.