Gangamaya turns to UN in her fight for justice 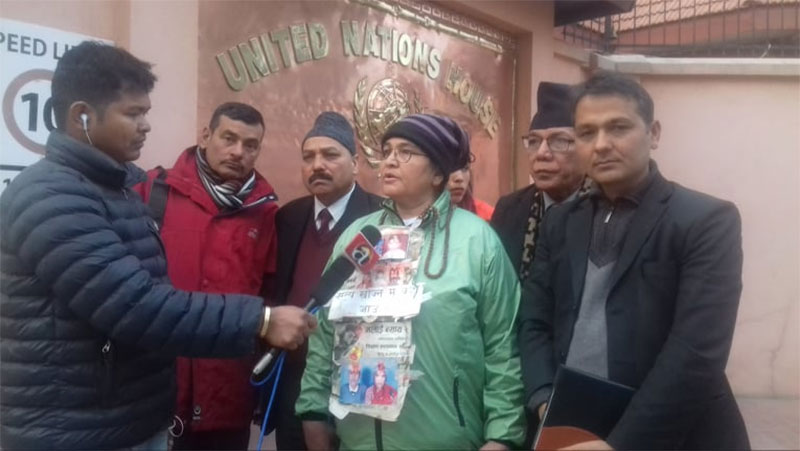 She was accompanied by her lawyers at the meeting.  Adhikari urged Julliand to play her part to give justice to her son saying that it is the responsibility of the international community as well to help her get justice.

Gangamaya’s 18-year-old son Krishna Prasad was killed by Maoists in Chitwan on June 6, 2004. She has staged fasts-unto-death repeatedly demanding actions against those involved in killing her son. Her husband Nanda Prasad Adhikari had died in 2014 in the course of his fast-unto-death.

“I have lost all hope of getting justice from the Nepal government. This is a state full of perpetrators who are bent on inflicting woe on the victims. I request you to play a role on your part to internationalize my long-drawn-out fight for justice,” Advocate Om Prakash Aryal quoted Gangamaya as saying to Julliand.

In response, UNRC Julliand assured her of doing all she could do for her son and also reminded her of her newspaper article in which she had urged all the stakeholders including the international community to address the issue of Gangamaya.

Nepal got rid of load-shedding not only due to Ghising’s sole efforts: Minister Gyawali
23 hours ago

The constitution has been vindicated
10 hours ago

Our most vulnerable need protection during the pandemic. We can then celebrate the constitution
9 hours ago

Will your daughter look upto to the Constitution of Nepal 2015?
9 hours ago

I will not involve in corruption, and I won’t let others to do so: PM Oli
5 hours ago

Are political parties serious about implementing the constitution?
8 hours ago

Don’t fail the constitution
10 hours ago