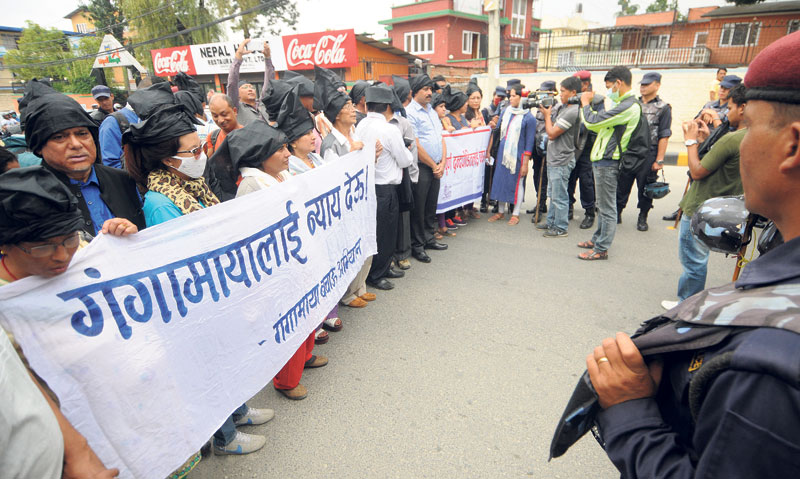 Human rights activists demonstrate in front of PM’s residence, Baluwatar in support of Ganga Maya Adhikari, who has been on a hunger strike demanding justice over her murdered son Krishna Prasad, who was abducted and killed by Maoist rebels during the ins

KATHMANDU, Aug 31: Doctors at Bir Hospital, who have been attending to Ganga Maya Adhikari, said that her health condition is deteriorating fast and she can be critical anytime in the coming days. She is currently receiving treatment at the intensive care unit (ICU) of the hospital.

They informed that Adhikari, who is on fast-unto-death since the last three weeks, is serious and has also been suffering from depression. Ganga Maya, the widow of late Nanda Prasad Adhikari, had resumed her hunger strike three weeks ago demanding justice for her son who was killed by the Maoists.

“Yesterday she suffered from high fever. We maintained her body temperature somehow, but her condition is delicate and it can worsen anytime,” Dr Manen Prasad Gorkhali, who is monitoring Adhikari's health, said. He informed that Adhikari has also been suffering from depression.

Adccording to Dr Gorkhali, they have been providing fluids to Adhikari through central. A central line is inserted in the arm or chest through the skin into a large vein, from which medicines, fluids or TPN are provided over a long period of time.

Demanding action against those responsible for the death of her son Krishna Prasad, she had staged hunger strike for 360 days, which ended following five points deal with government, last year. Her son Krishna Prasad was murdered in Chitwan in June 2004 by Maoist insurgents, who accused him of being an informant to the police.

Adhikari had been staying at Bir Hospital even after she ended her yearlong hunger strike last year. Her husband Nanda Prasad died on September 22, 2014 in the course of his fast-unto-death. His body is still at the morgue of the central police forensic laboratory at Maharajgunj.

KATHMANDU, August 9: The health condition of Dr Govinda KC is serious and deteriorating critically as his fast-unto-death passed the... Read More...