Ganesh Thapa’s autobiography to be released in February 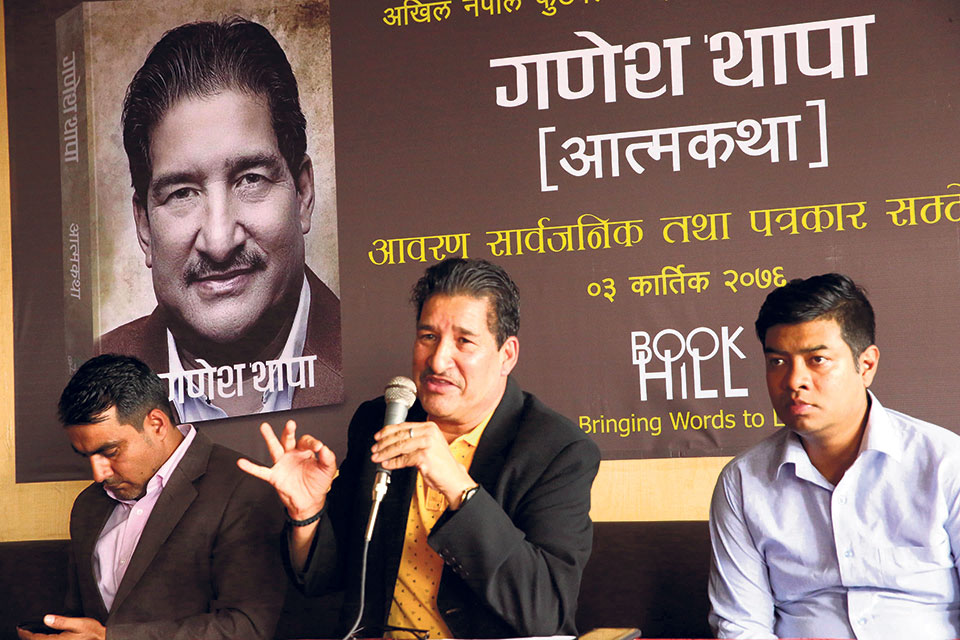 Former ANFA President Ganesh Thapa speaks during a function to public his autobiography in Kathmandu on Sunday. Photo: Republica

KATHMANDU, Oct 21: Former All Nepal Football Association (ANFA) President and Asian Football Confederation (AFC) Vice-president Ganesh Thapa said he has portrayed himself “as honestly and truthfully as possible” in his autobiography “Ganesh Thapa” which is set to be released next February.

The autobiography revolves around Thapa’s success, controversy and failure as a player and a football administrator, and also includes the development and evolution of Nepali football.

The book incorporates the well-known scams related to Thapa--including the decision of the Public Account Committee (PAC) on his involvement in the misappropriation of funds, the conclusion of Commission for the Investigation of Abuse of Authority (CIAA), the verdict of FIFA and his relation with former AFC President Mohammed bin Hammam.

The PAC, in 2014, had also concluded Thapa guilty of committing financial misconduct running to Rs 580 million from association’s funds. However, the CIAA had exonerated him clean chit.

Thapa, who had been at the helm of Nepal’s football governing body since 1995, had stepped down following the PAC directive.

Later, in November 2015, FIFA imposed a 10-year ban on Thapa from football activities slapped a fine of 20,000 Swiss francs for bribery after he was found guilty of “committing various acts of misconduct including the solicitation and acceptance of cash payments from another football official, for both personal and family gain in the context of the 2009 and 2011 elections for the FIFA Executive Committee at the Asian Football Confederation congress.”

According to Thapa, he, through his autobiography, has tried to explain his dissatisfaction after he was accused of committing financial misconduct of worth millions of rupees.

“I have tried to portray myself as honestly and truthfully as possible so that my autobiography will not be a matter of jokes,” said the 59-year-old former national football team captain during a function organized to make public the cover of the book on Sunday.

“My efforts to invalidate the false image the society has built about me based on the reports published in the media were unsuccessful. Therefore, I have written this biography in order to clear the cloud among the readers,” he added.

“The PAC judged me guilty of embezzlement without any proof while the CIAA gave me a clean chit,” Thapa said adding, “Yes, FIFA ethics committee banned me for accepting cash payments from Hammam. But, it is a different story”.

“It makes me sad for not being appreciated for my contribution in football and learn about the several claims of false accusations.”

“If my contributions are not valued when I live, no need treasure them after I die,” he added.

“I never got the opportunity to rebut the false reports about me. My habits and behaviors might have upset media persons in some occasions. But I must unravel the truth and facts.”

“This autobiography is not merely my clarification of things, but a document to open up the truth and to pass on my life story to the public.”

Thapa has also tried to scan the past and present of Nepali football in his book.

KATHMANDU, Dec 14: The All Nepal Football Association (ANFA) has unveiled the schedule for the tournaments to be organized in... Read More...