KATHMANDU, June 11: Gandaki Province Chief Sita Paudel has invited political parties to stake claim for the formation of a new government in the province.

Province Chief Paudel has asked political parties to stake claim for the appointment of Chief Minister by 3PM Saturday as per Article 168(5) of the constitution.

Of the total 61 members of the Gandaki Province Assembly (including Speaker), 27 voted in favor of the motion while 30 others did not express their confidence in CM Gurung on Thursday. Parliamentary Party chief of Nepali Congress in Gandaki Province, Krishna Chandra Paudel is likely to be appointed as new Chief Minister of Gandaki Province as he commands the support of all opposition parties.

Chief Minister Gurung was first appointed as Gandaki CM after the left alliance comprising CPN-UML and CPN (Maoist Center) recorded a landslide victory in the 2017 elections. He  was, however, reappointed as the chief minister on May 12 in his capacity as the parliamentary party leader of the largest political party in the provincial assembly after the coalition partner--- Maoist Center--- withdrew its support to the Gurung-led government. 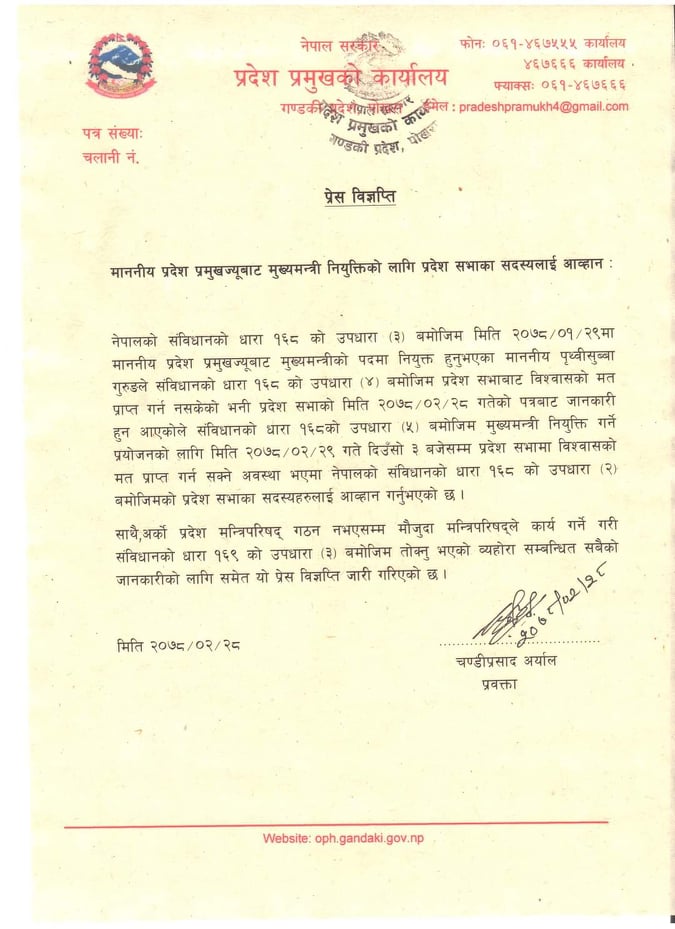 POKHARA, May 12: Prithvi Subba Gurung has again been appointed as the chief minister of Gandaki Province. ... Read More...

Province 2 governor’s memorandum to chief minister: Cabinet is not inclusive
19 minutes ago

One killed, three injured in road accident
4 hours ago

Rs 100,000 each given to families of five children drowned in pond
7 hours ago