Gameiro and Promes shine for France and Netherlands 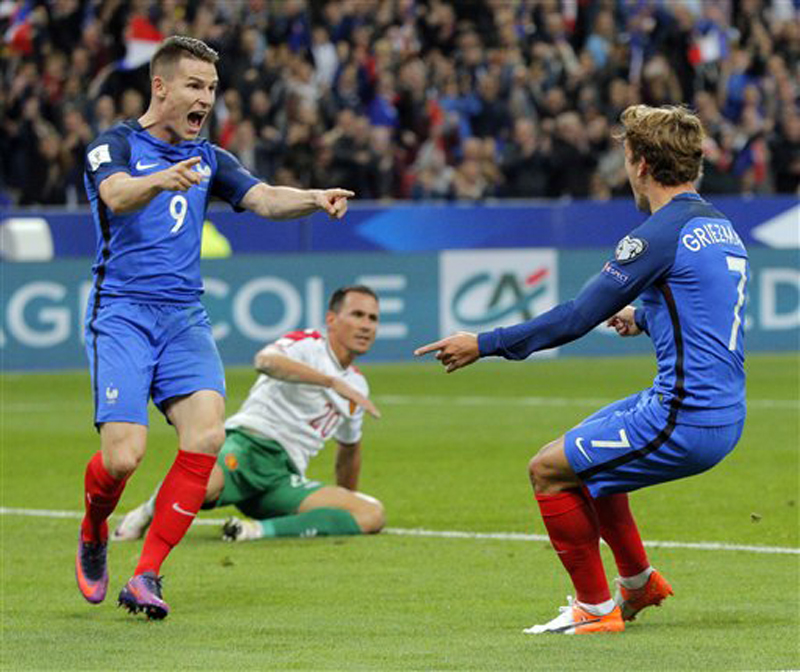 SAINT-DENIS, Oct 8: Kevin Gameiro scored his first goals for France in more than five years as the European Championship runner-up secured their first win in World Cup qualifying by 4-1 against Bulgaria on Friday.

Back home where it lost to Portugal in the Euro 2016 final three months ago, France conceded an early goal from the spot after only five minutes but recovered quickly and was in total control for most of the game.

The Netherlands also claimed its first victory in Group A with a 4-1 defeat of Belarus, a confidence-booster for the Dutch, who take on France on Monday in Amsterdam.

France, the Netherlands, and Sweden are level on points after two games.

Gameiro scored twice while Dimitri Payet and Antoine Griezmann also made the scoresheet.

Gameiro was regularly called on by previous France coach Laurent Blanc, until a friendly against the United States in November 2011. He had to wait nearly five years before wearing the France jersey again, going in as a substitute in a 0-0 draw against Belarus in September.

Gameiro had scored only once for France before, in a friendly against Ukraine back in June 2011.

His excellent display and gritty behavior at Stade de France, coupled to his promising partnership with Griezmann, will certainly convince France coach Didier Deschamps to call him more often in the future.

"I'm 29 years old now, I'm more experienced, and I understand that there are times when one needs to perform. I did it tonight," Gameiro said.

On a cold evening at Stade de France, the hosts were caught on the break almost immediately. Bacary Sagna clumsily fouled Georgi Milanov in the box and Mihail Aleksandrov converted the penalty with a shot past goalkeeper Hugo Lloris in off the post.

France had a good chance to level immediately but Gameiro was denied by a last-ditch tackle from defender Dimitar Pirgov.

The hosts enjoyed most of the ball possession and leveled when Gameiro connected with a curled cross from Bacary Sagna to beat Vladislav Stoyanov with a glancing header.

Payet was a bit lucky to give France the lead three minutes later with a cross which bounced past everyone in the area and went in. Bulgaria was then made to pay for a terrible mistake from Pirgov, who gave the ball away to Griezmann in front of goal in the 38th. Grizemann, the European Championship top scorer last summer, advanced to the edge of the area and coolly slotted home with a precise low shot.

Bulgaria players did not make up for their lackluster display after the interval and were pegged back in their half for long spells. They conceded again near the hour-mark after Griezmann assisted his clubmate Gameiro, who slotted home with a clean finish from close range.

"It's just natural," Gameiro said about the good understanding on the pitch he shares with Griezmann. "We are both small in size and love to play with the ball."

In Rotterdam, Quincy Promes scored his first two international goals and striker Vincent Janssen rediscovered the scoring touch that has deserted him in the English Premier League.

The Netherlands, which failed to qualify for Euro 2016, dominated a Belarus team that held France to 0-0 in its first Group A qualifier.

Winger Promes scored twice in the first half hour, and helped to set up Davy Klaassen's 55th-minute rebound strike eight minutes after Aleksey Rios capped a spell of Belarus pressure either side of halftime with a goal.

Promes' first goal was a shot that through the legs of three defenders.

"I shot it deliberately through the legs of the first defender," he said, "but you have to be a bit lucky to get it through two more sets of legs."

Vincent Janssen, who has struggled to find the net for Tottenham since joining the London club from AZ Alkmaar, scored the goal of the night by stealing the ball just inside the Belarus half, outpacing two defenders and thumping a curling shot into the far top corner.

Sweden remains unbeaten after their first two matches after Celtic defender Mikael Lustig scored the winner with a half-volley from Marcus Berg's corner in the 59th minute.

KATHMANDU, Nov 7: When someone asks a child ‘what do you want to be in the future?’ the most common answers... Read More...

Collective efforts can make Nepal a prosperous country in South Asia by next decade: Gyanendra Bahadur Karki
22 hours ago

Two arrested on charge of human trafficking
27 minutes ago

Gold price up by Rs 200 per tola, silver price remains stable
2 hours ago

Light to moderate rain forecast for today
2 hours ago