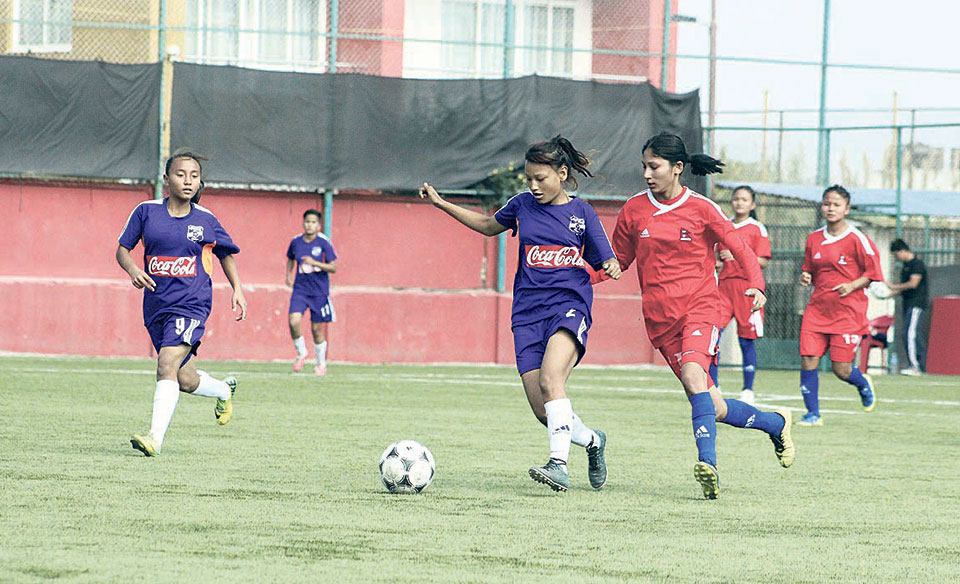 Players of Shree Seti Sharda Secondary School of Sindhupalchowk (blue) and Amar English School of Kathmandu in action during the Coca-Cola Cup Inter-School National Football Tournament at the ANFA Complex in Satdobato, Lalitpur on Monday.

The match was pushed to the penalties after it ended 1-1 in the regulation time. Bharat Chaudhary had put Mahendra in the driving seat scoring an opener in the 21st minute, but Rohan Dhital leveled the score for Gajurmukhi in the 35th minute.

Shree Shankar had recorded thumping 7-0 win over Bright Future School of Kathmandu in its first match on Sunday.

Similarly in Group C match, Bhumre registered big margin victory of 7-0 over Chhahari Shikshya Sadan of Kathmandu. Sunita Kunal and Udaya Thapa netted two goals each for the winning side, while Saraswati Hamal and Damanti Pangeni added one each goal.

Bhumre got other goal as gift after Chhahari’s Sapana Lopchan scored in own net. Bhumre had saw off Adarsha Higher Secondary School of Sunsari 4-1 in its first group match on Sunday.

In Group A encounter, Seti Devi Sharda secondary School of Sindhupalchowk beat Amar English School of Kathmandu 1-0. Preeti Rai scored the only goal of the match.