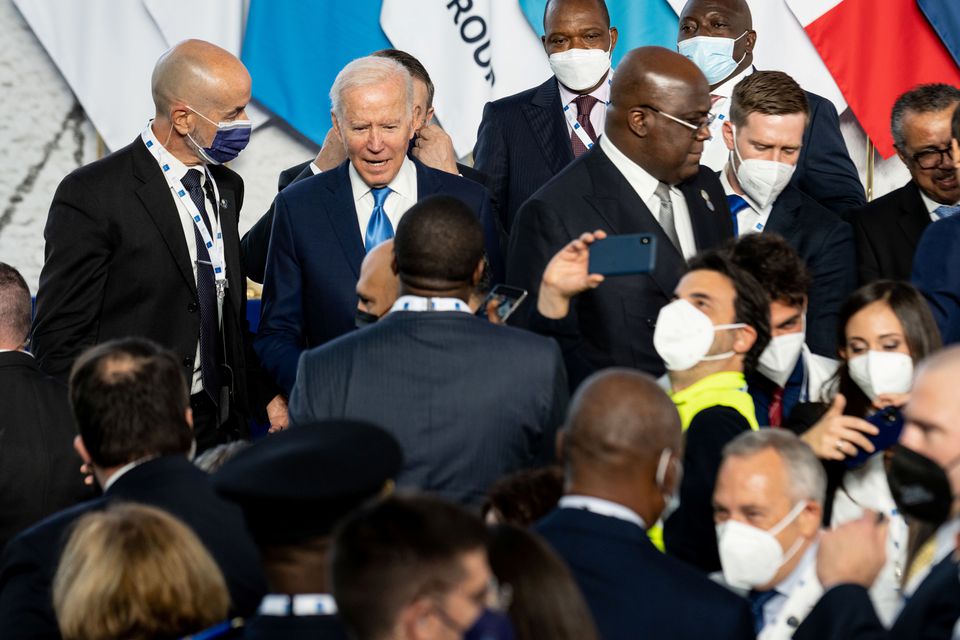 ROME, Nov 1: Leaders of the Group of 20 major economies agreed on a final statement on Sunday that urged "meaningful and effective" action to limit global warming, but angering climate activists by offering few concrete commitments.

The result of days of tough negotiation among diplomats leaves huge work to be done at the broader United Nations COP26 climate summit in Scotland, which starts this week.

U.S. President Joe Biden said he was disappointed that more could not have been done and blamed China and Russia for not bringing proposals to the table.

"The disappointment relates to the fact that Russia and … China basically didn’t show up in terms of any commitments to deal with climate change," Biden told reporters.

Although the G20 pledged to stop financing coal power overseas, they set no timetable for phasing it out at home, and watered down the wording on a promise to reduce emissions of methane - another potent greenhouse gas.

However, Italian Prime Minister Mario Draghi, who chaired the Rome gathering, hailed the final accord, saying that for the first time all G20 states had agreed on the importance of capping global warming at the 1.5 degrees Celsius level that scientists say is vital to avoid disaster.

"We made sure that our dreams are not only alive but they are progressing," Draghi told a closing news conference, brushing off criticism from environmentalists that the G20 had not gone nearly far enough to resolve the crisis.

The G20, which includes Brazil, China, India, Germany and the United States, accounts for 60% of the world's population and an estimated 80% of global greenhouse gas emissions.

The 1.5C threshold is what UN experts say must be met to avoid a dramatic acceleration of extreme climate events like droughts, storms and floods, and to reach it they recommend net zero emissions should be achieved by 2050.

The stakes are huge - among them the very survival of low-lying countries, the impact on economic livelihoods the world over and the stability of the global financial system.

"This was a moment for the G20 to act with the responsibility they have as the biggest emitters, yet we only see half-measures rather than concrete urgent action," said Friederike Roder, vice president of sustainable development advocacy group Global Citizen.

The final summit document said current national plans on how to curb emissions will have to be strengthened "if necessary" and makes no specific reference to 2050 as a date to achieve net zero carbon emissions.

"We recognise that the impacts of climate change at 1.5°C are much lower than at 2°C. Keeping 1.5°C within reach will require meaningful and effective actions and commitment by all countries," the communique said.

The leaders only recognised "the key relevance" of halting net emissions "by or around mid-century". This removed the 2050 date seen in previous versions of the final statement so as to make the target less specific.

China, the world's biggest CO2 emitter, has set a target date of 2060, and other large polluters such as India and Russia have also not committed to the 2050 target date.

German Chancellor Angela Merkel said the agreement was a good signal for COP26, but Canadian Prime Minister Justin Trudeau signalled he would have liked to see more ambition.

"There's no question that Canada, along with a number of other countries, would have liked stronger language and stronger commitments on the fight against climate change than others," he told reporters.

U.N. experts say that even if current national plans are fully implemented, the world is headed for global warming of 2.7C, with catastrophic consequences.

Draghi predicted that nations would keep on improving their plans to lower carbon emissions in the years ahead, adding that he was surprised by how far countries like China and Russia had shifted their stance in recent days.

"It is easy to suggest difficult things. It is very, very difficult to actually execute them," he said.

The final G20 statement includes a pledge to halt financing of overseas coal-fired power generation by the end of this year, but set no date for phasing out coal power, promising only to do so "as soon as possible".

This replaced a goal set in a previous draft of the final statement to achieve this by the end of the 2030s, showing the strong resistance from some coal-dependent countries

The G20 also set no date for phasing out fossil fuel subsidies, saying they will aim to do so "over the medium term".

On methane, which has a more potent but less lasting impact than carbon dioxide on global warming, they diluted their wording from a previous draft that pledged to "strive to reduce our collective methane emissions significantly".

The final statement just recognises that reducing methane emissions is "one of the quickest, most feasible and most cost-effective ways to limit climate change".

G20 sources said negotiations were tough over so-called "climate financing", which refers to a 2009 pledge by rich nations to provide $100 billion per year by 2020 to help developing countries tackle climate change.

They have failed to meet the pledge, generating mistrust and a reluctance among some developing nations to accelerate their emissions reductions.

However, Draghi said the funding gap had narrowed to less than $20 billion and predicted it could be closed further, with wealthy nations considering using financing from the International Monetary Fund to make up the shortfall.

World leaders will kick start COP26 on Monday with two days of speeches that could include some new emissions-cutting pledges, before technical negotiators lock horns over the rules of the 2015 Paris climate accord.

The United Nations said last week greenhouse gas concentrations hit a record in 2020 and the world was "way off track" in capping rising temperatures. read more

G-20 agrees on trade, migration, US goes own way on climate