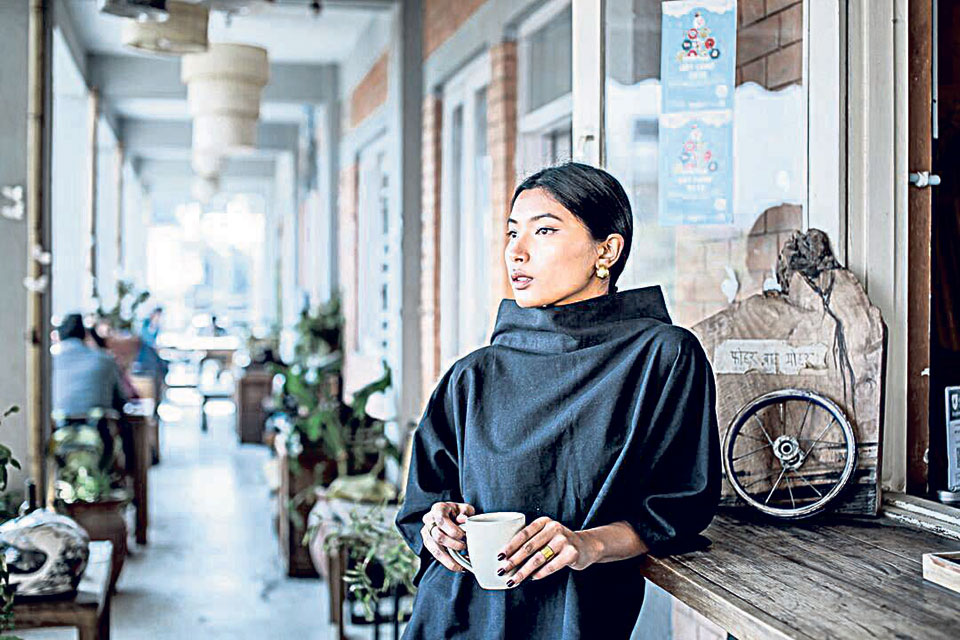 Rhea Pradhan was looking for something to do in her free time post SLC and that’s when fashion blogging caught her fancy and she entered the blogging scene. This was back in 2011, and terms like digital influencers and vloggers were not a thing – even blogging was a relatively new scene. Pradhan happened to stumble upon Le Happy blog by Luanna Perez-Garreaud and, inspired by her individuality and how well Perez-Garreaud expressed herself through her style in her blogs, Pradhan wanted to do something similar and jumped on the blogging bandwagon.

“The blogging scene was very different back then. I started with these platforms where one could upload lookbooks and started posting under ‘Rhea’ as my handle. They are not blogs in the conventional sense but something very similar and the pictures I uploaded were so bad. I can’t look at them without cringing now,” says Pradhan of her initial blogging days. Gradually, Pradhan switched to other more favorable platforms like blogspot and right now she has a custom address for it (www.peppyowl.com).

“I wanted a catchy username and owls were the ‘hip’ thing at the time. Everyone was wearing owl accessories and I also identify a lot with owls. They are these tranquil birds with a quiet demeanor. I used peppy because it’s the opposite of what owls are. The oxymoron, I believe, made it more interesting. It’s also very snappy and memorable too,” she explaining her blog name. Many people actually know Pradhan as Peppy Owl rather than through her real name, not that she’s complaining.

Although, she has been running Peppy Owl on her own for the most part, Pradhan admits that friends who were good with coding helped her quite a bit with the technical side of blogging. Pradhan slowly learnt it herself and has been handling that too since 2015 but, every now and then when she shouts for help regarding coding, her friends are happy to help her. Right now, Pradhan collaborates with up-and-coming and professional photographers to take pictures for her blog, but it was not so easy seven years ago when she was just starting out. Reminiscing about her early blogging years, she says, “I never thought I would get this far.”

Pradhan actually only believed she had something serious going on with her blog when she was hired as a stylist for a monthly lifestyle magazine. Apparently, her blog had caught their interest and they contacted her because they wanted to feature her in a spread. After working with her on that, they offered her a job as their in-house stylist. This was around the time she had just finished her A Levels and she took two years off before taking up Mass Communications for her undergraduate studies. She is currently in her second year. For her second gap year, she took up a contract-based job as a stylist with DS Collections.

Pradhan says she looks up to influential fashion figures like Tank Magazine's executive fashion director Caroline Issa and Ann Kim – the blogger behind Andy Heart. It’s their minimal and modern approach to style that appeals to Pradhan the most. But she says it’s the collaborations opportunities that she has had through her blog that have taught her the most. Inspiration comes through these chances to interact and learn from fellow bloggers, photographers, and brands. She also says these collaborations are her biggest achievements so far. “I couldn’t possibly name just a single thing as my proudest collaboration, it’s all of them. Peppy Owl was not created in just a day. It’s all these opportunities that have brought me here and I’m very grateful for them all,” she says.

However, it’s not all hunky-dory either. The hardest part for Pradhan regarding blogging has been managing and scheduling sufficient time for it. As a full time student, she does not have much time for blogging right now. But Pradhan says she realizes that she can’t just stop posting altogether because blogging is a very competitive space and if she doesn’t maintain a consistent presence, she might be lost in a crowd of bloggers before she has had her chance to shine. The challenge sometimes also lies in managing her collaborators’ time. “The photographer might not be free when I am and vice versa,” she says adding that she is trying to work out a system that lets her post consistently with as less hassle and time management issues as possible.

In the seven years of running Peppy Owl, Pradhan and her blog have gone through quite a bit of changes and she confesses she has also learnt some invaluable lessons. “The one thing I would suggest to anyone starting a digital enterprise is to be consistent, have quality content, and to create reach and connections. “You have to be visible so try and be present at events too,” she says. Another thing that Pradhan has incorporated in her life, that she thinks would serve everyone well, is the mantra ‘less is more’. This is also what drives her style. Recently, through her Instagram page, she revealed that she does not even own a wardrobe.

Although her blog is making waves in the Nepali fashion industry, Pradhan says that she is not that satisfied with her current blog and wants to revamp it sometime in the near future. She wants to update her blog and make it more user-friendly and interactive so that anyone wishing to get a taste of her style, fashion, or blogging has to visit her website and not just her Instagram page as many are doing right now.

She also wants to promote more Nepali brands and products through her work. And even though she respects vloggers, she has no immediate plans of joining them. “I can’t imagine having the time to do all that. I barely have time for my blog. It might seem pretty simple to viewers but there is a lot of time and effort that goes into it and, right now, I know I can’t do it,” says Pradhan adding that if she ever does start uploading videos she wants to incorporate educational aspects about fashion too and not just stick to the regular ‘What I Wore This Week’ videos.

Fashion is an art that glimmers to its maximum when complemented with matching accessories. Undoubtedly, the season puts fashion buffs... Read More...

Logo fashion industries is a joint venture company that was established in Nepal in 1997. Co-founder Hira Muktan has been... Read More...