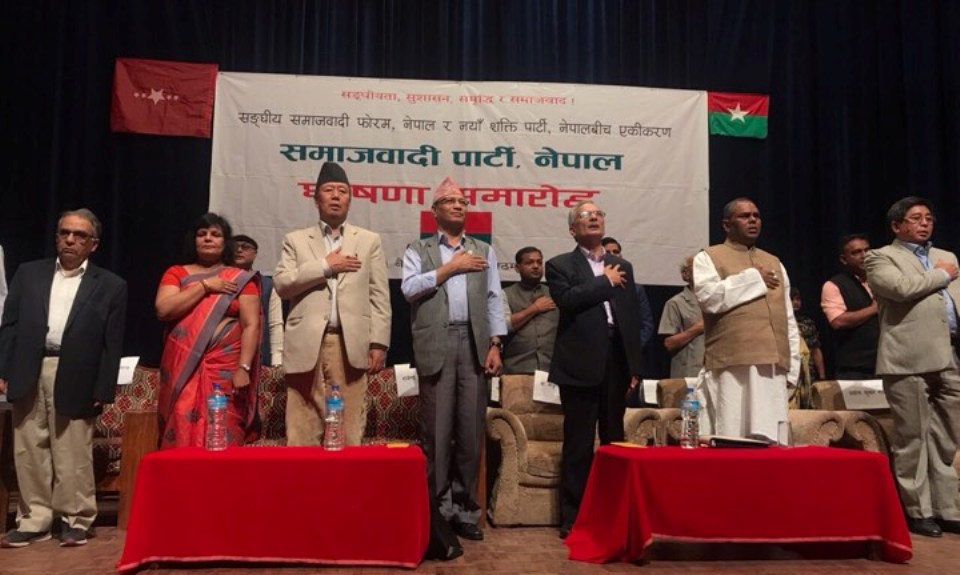 Vow to become an alternative political force in country

Addressing a function organized to announce their unification, FSFN Chairman Upendra Yadav and NSPN Chairman Baburam Bhattarai announced that both their parties were now dissolved with effect from Monday and that they would soon start the registration process for the new party at the Election Commission as per the existing laws.

The negotiations for unification between FSFN led by Deputy Prime Minister and Health Minister Upendra Yadav and NSPN led by former prime minister Baburam Bhattarai culminated in success after Bhattarai agreed to most of the political agenda espoused by FSFN, including its political line and an 11-province model for the federal structure. NSPN has also agreed to accept FSFN's election manifesto and its flag. The two parties have agreed to work on a new election symbol.

According to a joint statement issued by Yadav and Bhattarai, the political line of the newly-formed SPN will be to safeguard and promote the achievements made so far while institutionalizing the federal democratic republic .

They have also announced to take up a people's struggle and constitutional amendment as the means to move forward on the path of progressive reform, sustainable development, and prosperity based on equity.

The two leaders have announced that progressive federal socialism will be the guiding principle of the new party. Among other things, they have announced to stand for a directly elected executive president, a parliamentary system based on a fully proportionate electoral system, and an 11-province model for the federal structure, including 10 geographical provinces and one non-geographical province.

The new party will honor civil liberties, a pluralistic open society, adult franchise, periodic elections, rule of law, a competitive multi-party democracy, a constitutional and legal state, fundamental rights and human rights, separation of powers, an independent judiciary, and press freedom, according to the joint statement.

As per the understanding reached between the two parties, there will be a total of 25 office bearers in the unified party. In the new hierarchy in the party, Yadav will act as chairman of the party's central committee while Bhattarai will head the federal council of the party. This gives more executive powers to Yadav, although Bhattarai will be above Yadav in the party hierarchy . The federal council will be responsible mainly for the formulation of the party's plans and policies.

Likewise, Dambar Khatiwada, Dan Bahadur Bishwakarma and Prakash Adhikari are nominated as deputy general secretaries and Mohammad Istiyak Rai, Durga Sob, Parshuram Basnet and Prashanta Singh are nominated as secretaries of the new party. Bijaya Kumar Yadav has been given the portfolio of treasurer.

Both Yadav and Bhattarai have called on the RJPN —a regional party with a strong base in the southern plains— to come into a unification process in order to launch a collective fight in the cause of the poor, the marginalized and the oppressed . Although informal negotiations with top RJPN leaders were underway since a few months ago, they have not made any headway so far.

Although some analysts see slim chances of unification between RJPN and the newly formed SPN led by Yadav, RJPN leaders including Jha express confidence that unification will eventually take place. “Informal negotiations with Yadav and other senior leaders of the party are continuing even today . Our unification process will gain momentum once FSFN pulls out of the government,” Jha further said.

FSFN and RJPN have 17 and 16 members respectively in the House of Representatives and two members each in the National Assembly. Similarly, NSPN has one member in the House of Representatives. Unification between the newly-formed SPN and RJPN could put them in a relatively strong bargaining position with the government as their strength in the 275-member lower house of parliament totals 34.