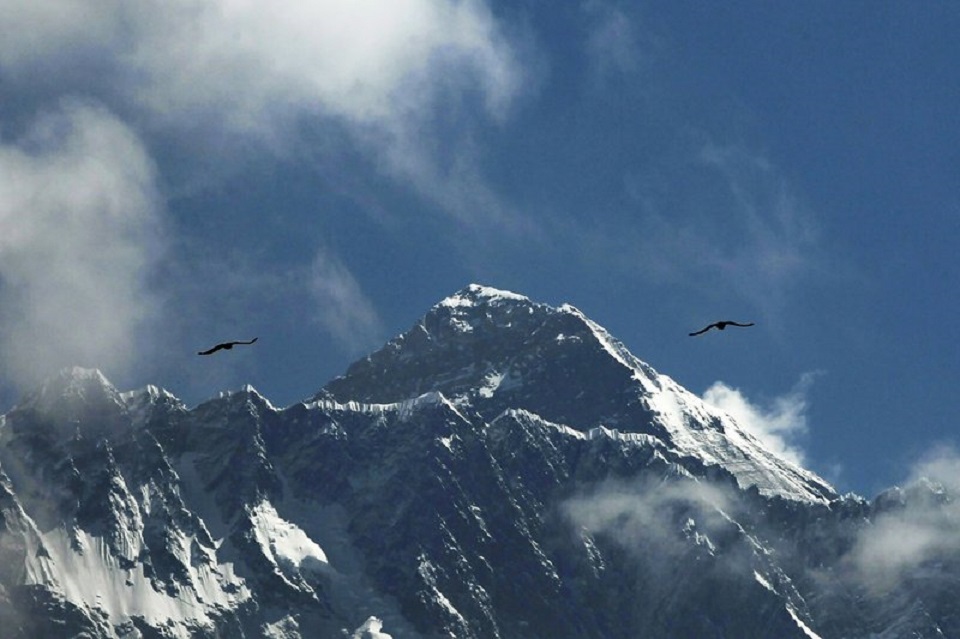 FILE - In this May 27, 2019, file photo, birds fly as Mount Everest is seen from Namche Bajar, Solukhumbu district, Nepal. The closure of Mount Everest will have significant financial ramifications for the local Sherpas, cooks, porters and other personnel who make their living during this short climbing window. It also affects the clients who paid big money and expedition guides who are still on the hook for expenses. They all agree it was the right decision in light of the coronavirus. (AP Photo/Niranjan Shrestha, File)

KATHMANDU, Nepal: Apa Sherpa knows firsthand all the risks of climbing Mount Everest. He’s been to the summit 21 times.

The potential for a COVID-19 outbreak at base camp had him just as fearful as a blizzard or cracking ice.

The 60-year-old mountaineer from Nepal who now lives in Salt Lake City applauded the decision to shut down the routes to the top of the famed Himalayan mountain over concerns about the new coronavirus.

That meant Sherpa didn’t have to worry about the health of anyone on the mountain, including his niece, nephew and cousin as they follow in his Everest-climbing footsteps.

Now, he has another fear: How will those who work in the shadow of Everest make ends meet?

The closure has significant financial ramifications for the local Sherpas, cooks, porters and others who make their living during the short climbing window.

“I just feel bad,” said Apa Sherpa, who established a foundation to help Nepalese students with their education. “For everyone.”

Phurba Ongel was all set for spring work guiding western climbers to the 29,035-foot (8,850-meter) Everest summit when he heard the news nearly two weeks ago. He has already scaled Everest nine times and makes about $7,000 per season.

That was money he desperately needs for his two sons’ school, rent and groceries.

Also losing money are clients, who dole out anywhere between $35,000 to $85,000 to be led up the mountain, and expedition operators who have expenses to pay despite the closure.

“It is devastating for the tourism industry in Nepal and abroad,” said Lukas Furtenbach, a mountaineering guide and founder of Furtenbach Adventures. “Many businesses will not survive this.”

China s hut down the northern route through Tibet due to the COVID-19 pandemic on March 12. A day later, expeditions to the Nepal side were closed, too. Everest straddles the border between Nepal and China and can be climbed from both sides.

By shutting down the passage through the south route of Everest, the Nepal government stands to lose some $4 million in permits alone. There are thousands of people who depend on the money spent by climbers in Nepal.

“They have no income right now. Nothing,” Apa Sherpa said. “But the government made the right decision. The lives are more important.”

According to Ang Tshering, a mountaineering expert in Nepal, the mountaineering industry brings in about $300,000 annually — and most of it during the spring climbing season that begins in March and ends in May.

“The closure of the mountains has made thousands of people jobless in the mountaineering community,” Tshering said.

It’s setting up a potentially risky proposition in 2021 — overcrowding on the mountain. There will be a backlog of clients eager to make the trek, along with a new batch of climbers.

Last May, a climber snapped a memorable photo from a line with dozens of hikers in colorful winter gear that snaked into the sky. Climbers were crammed along a sharp-edged ridge above South Col, with a 7,000-foot (2,133-meter) drop on either side, all clipped onto a single line of rope, trudging toward the top of the world.

“It would be very important that Nepal puts reasonable regulations in place for operators and climbers,” said Furtenbach, who resides in Austria and spends time at Lake Tahoe. “Otherwise, I see that risk for a total mess next year.”

For the Sherpas, it’s about finding a way to hang on after their source of income was halted. They’re the backbone of an expedition — the first to reach Everest each climbing season and the last to leave. They set up the camps, carry the equipment and cook the food for climbing parties. They fix the ropes and ladders over the crevasses and ice-falls that enable mountaineers to scale the peak.

Generally, a Sherpa can earn $10,000 or more should they summit. Porters or cooks at the mountaineers’ camps average between $3,000 and $5,000 during their three months of work. That’s a significant amount compared with Nepal’s $1,035 annual per capita income.

That’s why Apa Sherpa started his foundation -- to give young kids another route.

Born into poverty and with a modest education, he had no choice but to climb. By the age of 12 he was working on climbing expeditions. At age 30, he summited Everest for the first time. He had earned the nickname “Super Sherpa” before retiring in 2011.

His organization — the Apa Sherpa Foundation — attempts to provide hot meals to students at the Ghat School in the Khumbu region. It also pays the salary of six teachers in Thame and provides school supplies such as computers. He’s hoping to expand the foundation’s reach into other schools in Nepal.

The climbing community has seen an interruption on Everest before: An earthquake-triggered avalanche killed 19 at the base camp in 2015 and another avalanche over the dreaded Khumbu Icefall in 2014 killed 16 Nepali workers.

Apa Sherpa shuddered at the thought of anyone being at base camp in the midst of the coronavirus. He has plenty of family that still serve as mountain guides.

For most people, COVID-19 causes only mild or moderate symptoms, such as fever and cough, with the vast majority recovering in about two weeks. But anything respiratory can have dire consequence at base camp, where there are climbers scattered around in tents as they acclimate.

“At high altitude our respiratory systems are incredibly distressed and challenged,” said Adrian Ballinger, t he founder of Alpenglow Expeditions. “We do know the coronavirus, which affects the respiratory system and can lead to pneumonia, would absolutely be much more serious and lead to potentially serious consequences and fatalities much more quickly at altitude.”

Ballinger had 11 clients scheduled for the summit team to the Tibet side of Everest, along with seven foreign mountain guides and 18 Sherpas.

He’s trying to lessen their financial hardships as best he can. Same with Garrett Madison, a guide based out of Seattle who was scheduled to lead his 14th Everest expedition.

“This is a tough time for sure. Thankfully we’ve saved up a rainy day fund to weather the storm,” Madison said. “With Everest canceled (our largest program of the year), as well as all other programs in jeopardy because of travel bans, we don’t know when we can resume normal operations of our programs.”

To celebrate recently turning 50, Graham Cooper of Piedmont, California, planned to summit Everest from the Tibet side with Ballinger. It was a bucket-list item for Cooper.

To prepare, he slept in an oxygen tent to simulate the thin air. He also ventured to Lake Tahoe, where he trained by hiking up the snow-packed slopes and skiing down.

Then, he received the text he was fearing: No trip. The mountain was closed.

Sure, he was disappointed. But he also understood.

“It’s not the end of the world,” Cooper said. “There’s always next year.”

KATHMANDU, April 23: A Norwegian climber became the first to be tested for COVID-19 in the Mount Everest base camp... Read More...

Four famous amateur model grandmothers took off their masks during a saunter down the streets of Beijing on Thursday to... Read More...