From Beijing to Silicon Valley 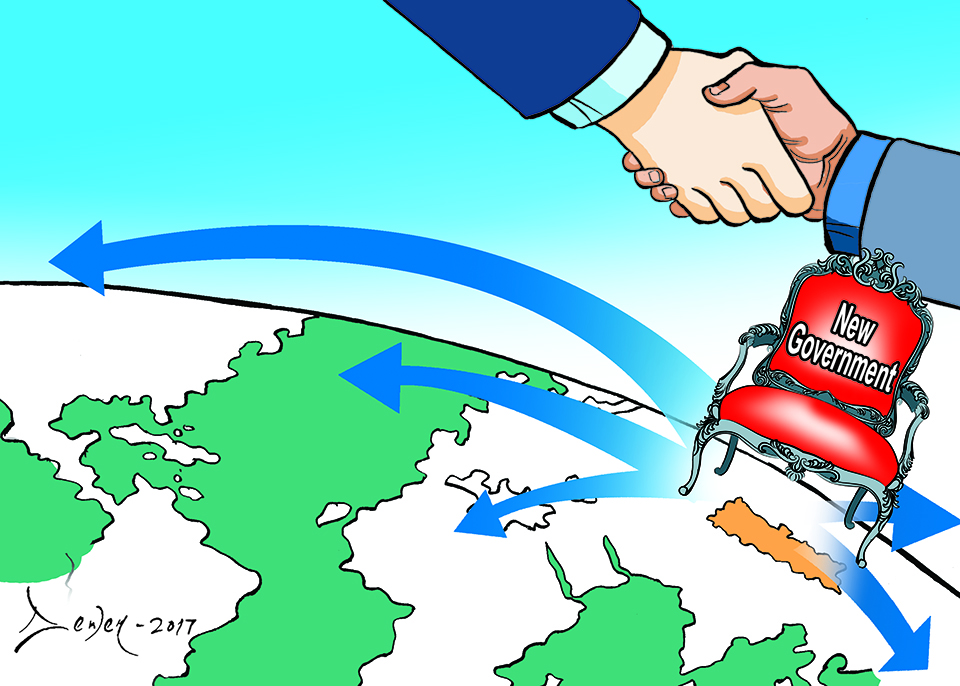 How can we connect with Silicon Valley in order to attract some of the best companies to come and invest in Nepal?

‘Why not invite leaders from the SAARC countries at the swearing-in ceremony?’ Someone tweeted as the votes were being counted and it was clear that the Left Alliance was going to win big. I thought, why not? Our international standing has suffered humiliating setback in the past few decades. Our voice has weakened in international forums. KP Oli will come to power with the strongest mandate of any modern-day prime minister. The alliance is close to winning a two-thirds majority in the House of Representatives and majority in six of the seven provinces.

One cannot think of a better time to reassert our priorities, project confidence, invite international companies to do business in Nepal, and conduct transparent and professional foreign relations. The ‘Red Wave’ in Nepal has strong reverberations in Beijing, New Delhi and to some extent in Washington DC and London. It is now the time for us to be innovative in conducting our foreign relations, and perhaps also to think beyond the usual India-China dynamics and focus on economic diplomacy.

As newly elected member of the powerful United Nations Human Rights Council (HRC) for the term of 2018-2020, we have a unique opportunity to voice our concern in critical issues around the world. In November of this year, Nepal abstained, one of 26 abstentions, on the UN resolution demanding that Myanmar take back the Rohingya refugees and provide them citizenship. Moreover, the head of Myanmar army was in Kathmandu last week on an official trip. No one has a clue as to who entertained the idea of inviting the general whose army has been accused by the United Nations of ethnic cleansing of Rohingyas in Myanmar. This does not bode well when we want to take the moral high and voice our support for those who are oppressed and weak.

Indian and some international media have done a huge disservice to our country and the decision we make at the voting booth by painting the provincial and federal elections as the choice between pro-China and pro-India parties. Some within the Indian establishment must come out of their cocoon to better understand the seismic shift in power dynamics in Nepal and wholeheartedly support the new government in implementing big projects which have already been agreed upon by the two countries. The idea of painting the Left Alliance as anti-India is not going to be helpful in improving bilateral cooperation.

There has to be real effort on both the sides to improve relations and focus on getting things done. Both countries will be better off if we can figure out why projects like Pancheswor Multi-Purpose and Postal Highway have been ‘under construction’ for decades. Two towering behavioral economists Daniel Kahneman and Amos Tversky once wrote: “Images of the future are shaped by experience of the past”. Nepal-India relations are better explained by our experiences of the past and it is rather natural for us to construe our future relations accordingly.

Similarly, China should also help the new government realize some of the infrastructure projects signed by the two governments, and let Nepal chart its own course. Only railways and reliable road links to the north will vitalize our economy and people-to-people relations. Seven projects are being currently discussed under the One Belt One Road (OBOR) initiative, and the two countries should start the work on these projects without delay. Concessional loans and grants from the newly established Asian Infrastructure Investment Bank (AIIB) will be important in financing some of our hydropower, road and railway projects.

Reaching out to all

We need sustained diplomatic engagements with Malaysia, Qatar, the UAE and with other Middle Eastern countries where millions of Nepalis work, often under harsh conditions. Some of the companies in these countries have openly flouted bilateral labor agreements and Nepalis are paying the price. The high mortality of young Nepalis working in these countries is simply jarring. We have to wake up to this reality and start helping those in dire need, and for this our diplomats serving in those places must be capable, smart and experienced. Similarly, KP Oli should not hesitate to reach out to seasoned diplomats from Nepali Congress and other parties to serve the country.

Apart from India and China, we have rarely seen high-level visits to Nepal in the past decade or so. Our engagements with some powerful western countries are being primarily conducted through embassies and some mid-level diplomats. Our rather weak voice during the 2015 Indian blockade was a stark reminder of the need for robust engagements with the rest of the world.

We will likely see new diplomatic corps in important postings, from New York, Washington DC to New Delhi to Beijing. These diplomats carry an important day-to-day function of engaging with power centers in respective places and in making a strong case for Nepal at all times. We can only hope that the new government will choose the best ones to represent our country around the world.

Moreover, our foreign ministry recruitment has to be modernized and it should be an attractive place for young and bright minds to work and prosper.

Besides, we must also explore other innovative ways to engage with the rest of the world. How can we connect with the Silicon Valley in order to attract some of the best companies to come and invest in Nepal? Why not appoint a tech ambassador to the Silicon Valley? Facebook alone has more than 7 million active users in Nepal; Twitter has more than three million and there are seven million YouTube users. Tesla could set up a manufacturing shop in Nepal. Can we think of ways to lure these companies to at least explore business opportunities here in Nepal?

The story is that Rwanda’s ruler Paul Kagame has a council of powerful American businessmen, including billionaire Warren Buffett and Howard Schultz, executive chairman of Starbucks, to promote Rwanda and encourage others to invest in the country. Starbucks buys a lot of coffee from Rwanda, helping lift many Rwandans out of poverty.

We have a few Nepalis who have made name for themselves, including the likes of Prabal Gurung, Manisha Koirala and Ani Choying Dolma. Why not use their star power in creating a circle of Nepali friends worldwide who can promote Nepal as an attractive investment destination? Then we also have US Senator Patrick Leahy who loves this country and has been a great friend in Washington. Plus, why not make an effort to invite Bill Gates and Mark Zuckerberg to Nepal and see what can be done to bring their companies here?

As the vote count winds down, Indian media is in all-out panic mode. They see Nepal leaning towards the north, another loss to Modi’s neighborhood-first policy, they say. But nothing should distract us from asserting our national interest while dealing with both Beijing and New Delhi. A few weeks before the provincial and federal elections, KP Oli invited a bunch of editors to discuss issues ranging from healthcare to development. He stressed that we have to move at a lightning speed. Perhaps, time is now for us to do the same when it comes to our foreign policy.

And yes, it doesn’t hurt to actually invite foreign ministers from the SAARC and China at KP Oli’s swearing-in ceremony.

BEIJING, Nov 12: A $300 bottle of wine sold in the United States and Europe is made in the unlikeliest... Read More...