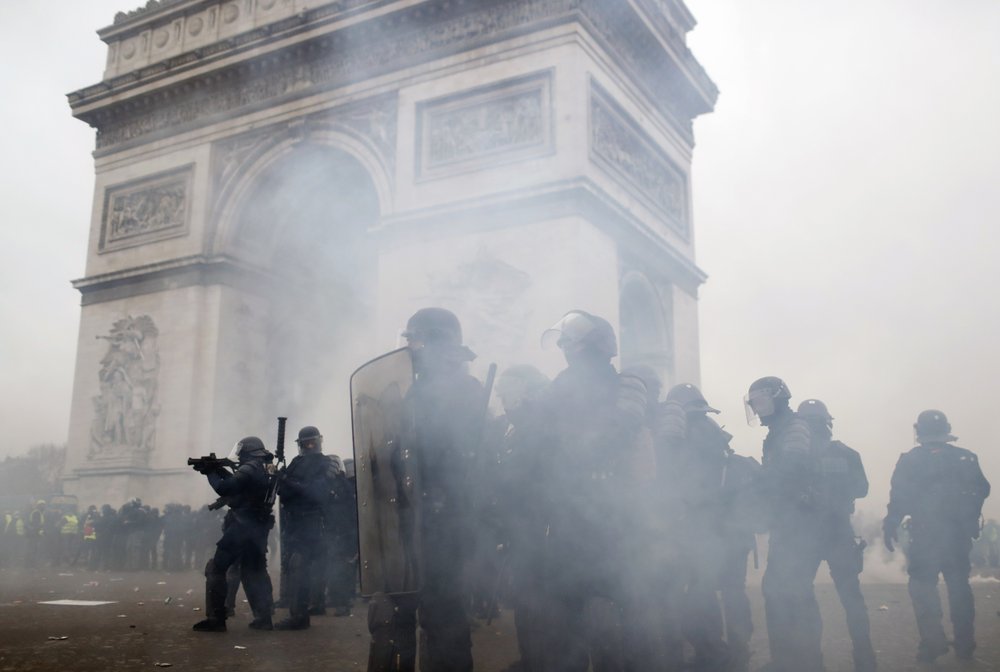 PARIS, Aug 18: Three riot police officers, a police commander, a police academy teacher — all are among eight French police officers who have killed themselves recently. That makes 64 so far this year — and the number just keeps on climbing.

Deaths by suicide for French police now outnumber deaths in the line of duty. The protectors need protecting, say police unions, which are demanding more help to stop the problem.

Those who choose to end their lives are from everywhere in France and of all ages, many with young children. The latest death came Wednesday in the Ardeche region in southeast France. Why they step across what one police union calls the “thin blue line” remains a question that French authorities have so far been unable to answer.

A parliamentary inquiry made public in July lists a multitude of reasons for the stress and despair among French police, including overwork since a series of terrorist attacksthat started in January 2015 and the weekly, often extremely violent, anti-government protests since November by the yellow vest movement seeking more economic and social justice . It does not single out any one reason.

“Given the situation today, 2019 could be the worst in the last 30 years,” said Denis Jacob, head of the Alternative Police CFDT union.

A Senate report last year said the French police suicide rate was 36% higher than the rate for France’s general population, but also uncovered no single reason behind the suicides.

“We don’t have an understanding” of why, Interior Minister Christophe Castaner conceded in April as he announced yet another prevention plan, the third minister in a row to do so, underlining authorities’ failure to solve the public health problem.

Significantly, Castaner acknowledged that police suicides must not be considered “external to work,” and seen as only the result of personal problems. And National Police Director Eric Morvan broke a taboo, sending a letter to all officers encouraging them to talk “without fear of being judged” and saying discussing distress “is never a weakness.”

While psychological trauma, including encounters with violence, is a risk factor for suicide, there are 10-15 factors that can feed the “acute crisis” which leads to taking one’s own life, Catherine Pinson, a psychologist in charge of the police support service, told the Senate inquiry.

The “hypervigilance” of police in the face of potential terror attacks is a clear stress factor that keeps police in their “bubble” even at home, Amelie Puaux, a psychologist with the support service, told the French senators.

And the 2016 deadly attack on a police couple in front of their small child at their home in Magnanville, west of Paris, dramatically impacted police officers fearful for their families, she said. Some moved, changed services or resigned to protect their loved ones.

Sebastian Roche, a research director at the National Center for Scientific research who specializes in comparing police systems, says there are simply no studies to understand the causes of the French suicides or impact studies to evaluate prevention measures, which he calls a “huge weakness” within the Interior Ministry.

He doesn’t believe that PTSD — with Post Traumatic Stress Disorder — is at the root of the problem, noting the dip in police suicides in 2015 when deadly Islamic State attacks in France began in January and culminated in November with the Paris massacres that left 130 people dead.

“All of a sudden, their mission made sense,” he said by telephone. “The population judged them as useful.”

French citizens applauded police as heroes during that stretch in 2015. That image lost its shine over time, then collapsed, as French police matched exceptionally violent yellow vest anti-government protests with harsh containment tactics that maimed some protesters.

While suicide among police is a problem in many countries, France’s rate appears exceptionally high.

In the U.S., with a population five times that of France, 167 officers died by suicide in 2018 and 111 so far this year, according to Blue H.E.L.P., a Massachusetts-based organization devoted to preventing police suicides. A U.S. suicide prevention bill signed into law in July will also supply funds for support.

In Italy, a fellow European nation slightly less populous than France, 31 officers have killed themselves this year, according to the police support group Cerchioblu. Britain’s Office for National Statistics counts 21 to 23 police suicides a year between 2015 and 2017, but unlike in France, most British police do not have guns.

The French parliamentary reports laid out a kaleidoscope of deficiencies within the security forces that can eat away at morale and feelings of self-worth, from distant superiors fixated on numbers of arrests to the 23 million hours of unpaid overtime officers had worked as December 2018, according to the parliamentary inquiry.

A lack of equipment and dilapidated police stations and living quarters were also cited. In the Paris region, the inquiry found it “wasn’t exceptional” to find five officers sharing a cramped living space or for some to be sleeping in their cars.

The government pledged to launch a platform of psychologists operating 24/7 by June, but say now that won’t be ready until September.

A hotline is available, but Jacob is among those who think that an emergency number alone won’t solve the French police suicide problem. His union wants police to have access to independent psychological services, not those run by the government, so that seeking help — now widely perceived as a failure — can be discreet. Unions also want deeper investments and a structural overhaul.

An officer also risks losing their gun if a psychologist deems the firearm a risk, a development that takes the officer out of the field and holds up their problems for all to see, he said.

“It’s a vicious circle,” a police officer who for 20 years sacrificed family life for work recounted on LCI TV, months after pulling himself away from killing himself.

“One night you go home, look around and it’s empty,” he said. “I was tired. I took my gun and put it in my mouth.”

Yet looking at a photo of his daughter and thinking of bodies he’d removed from suicide scenes stopped him.