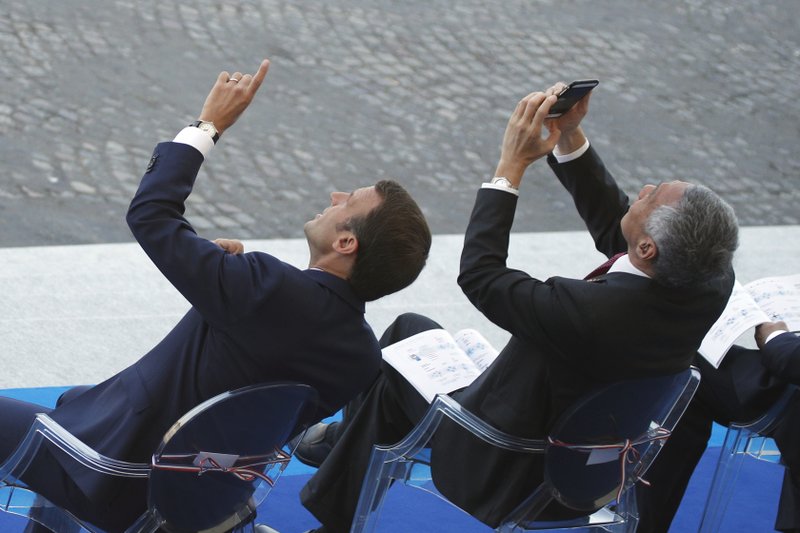 PARIS, July 14: France’s military had something extra to celebrate Saturday as it showed off its might for Bastille Day celebrations: a budget boost from President Emmanuel Macron.

The pomp-filled parade down Paris’ Champs-Elysees suffered a couple of glitches, as two police motorcycles crashed during a performance and there was an apparent color miscalculation in the red-white-and-blue smoke sprayed by fighter jets zooming over the Paris skyline. Overall, however, the event was about celebrating France’s security forces. While thousands paraded through central Paris, around 110,000 others fanned out around the country to protect Saturday’s celebrations, on alert after a Bastille Day truck attack in 2016 in Nice killed 86.

Macron presided over the Paris parade, which commemorates the storming of the Bastille prison in Paris on July 14, 1789, and the beginning of the French Revolution. Macron signed a new military budget on the eve of Saturday’s parade aimed at lifting defense spending to 2 percent of the gross domestic product, as promised to NATO.

The rise had long been planned but came just after a contentious NATO summit in which President Donald Trump assailed allies for not spending enough on defense. The spending hike also comes after last year’s Bastille Day celebrations were marred by the departure of the French military’s chief of staff over a budget dispute with Macron.

Singaporean Prime Minister Lee Hsien Loong was the guest of honor at Saturday’s Paris events, and troops from Singapore joined the parade. Last year’s main guest was Trump, who later said he wanted to stage a similar parade in Washington.

In addition to military units marching in the Paris parade, participants included rescue workers who helped French Caribbean territories devastated by hurricanes last year. Popular French astronaut Thomas Pesquet was to be among the pilots flying warplanes for the overhead show.

The two motorcyclists who crashed were part of a group tracing patterns on the Place de la Concorde as part of a carefully choreographed performance in front of Macron. After briefly falling down on the plaza’s cobblestones — long the bane of the city’s motorcyclists and cyclists — the drivers righted the vehicles, to applause from the crowd.

The other hiccup came when nine Alpha jets flew in formation over the parade shooting lines of smoke in the colors of the French flag. One of the jets sprayed an extra line of red smoke, instead of blue. An Air Force official confirmed to France-2 television that it was a mistake. There were supposed to be three planes streaming red, three planes spewing white and three planes shooting blue.

Security measures for Saturday’s events include limits on alcohol and fuel sales in Paris and other big cities, and stepped-up identity checks. Extra security is also in place for the Tour de France, which passes Saturday through Normandy, and for Sunday, when France will be watching its national soccer team face Croatia in the World Cup final.

FRANCE, June 28: When Emmanuel Macron first touched upon the idea during his 2017 campaign, the project appeared to be more... Read More...

KATHMANDU, Oct 27: The French government has conferred the highest French civil distinction “Knight of the Legion of Honour” on Nepali... Read More...