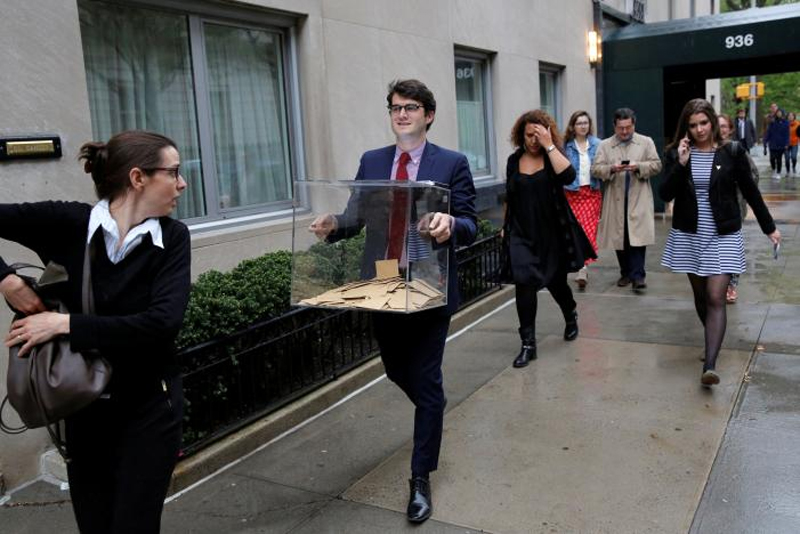 France goes to the polls on Sunday for the first round of a bitterly fought presidential election, crucial to the future of Europe and a closely-watched test of voters' anger with the political establishment.

Nearly 47 million voters will decide, under tight security, whether to back a pro-EU centrist newcomer, a scandal-ridden veteran conservative who wants to slash public spending, a far-left eurosceptic admirer of Fidel Castro or appoint France's first woman president, to shut borders and ditch the euro.

The outcome will be anxiously monitored around the world as a sign of whether the populist tide that saw Britain vote to leave the EU and Donald Trump's election in the United States is still rising, or starting to ebb.

Emmanuel Macron, 39, a centrist ex-banker who set up his party just a year ago, is the opinion polls' favorite to win the first round and beat far-right National Front chief Marine Le Pen in the two-person run-off on May 7.

For them to win the top two qualifying positions on Sunday would represent a seismic shift in the political landscape, as the second round would feature neither of the mainstream parties that have governed France for decades.

"It wouldn't be the classic left vs right divide but two views of the world clashing," said Ifop pollsters' Jerome Fourquet. "Macron bills himself as the progressist versus conservatives, Le Pen as the patriot versus the globalists."

But conservative Francois Fillon is making a bit of a comeback after being plagued for months by a fake jobs scandal, and leftist Jean-Luc Melenchon's ratings have surged in recent weeks. Any two of the four is seen as having a chance to qualify for the run-off.

The seven other candidates, including the ruling Socialist party's Benoit Hamon, two Trotskyists, three fringe nationalists and a former shepherd-turned-centrist lawmaker are lagging very far behind in opinion polls.

Months of campaigning has been dominated by scandals which have left many voters agonizing over their choice. Some 20-30 percent might not vote and about 30 percent of those who plan to show up at the polling stations are unsure whom to vote for.

Adding uncertainty to France's most unpredictable election in decades, pollsters say they might not be able to give precise estimates of the outcome at 8 p.m. (1600 ET) as usual, because small and medium-sized polling stations will be open one hour longer than in past elections.

Bankers and brokers in Paris and far beyond are expected to be glued to their screens all evening. The possibility of a Le Pen-Melenchon run-off is not the most likely scenario but is one which alarms them.

While Macron wants to further beef up the euro zone, Le Pen has told supporters "the EU will die." She wants to return to the Franc, re-denominate the country's debt stock, tax imports and reject international treaties.

Melenchon also wants to radically overhaul the European Union and hold a referendum on whether to leave the bloc.

Le Pen or Melenchon would struggle, in parliamentary elections in June, to win a majority to carry out such radical moves, but their growing popularity worries both investors and France's EU partners.

"It is no secret that we will not be cheering madly should Sunday's result produce a second round between Le Pen and Melenchon," German Finance Minister Wolfgang Schaeuble said, adding that the election posed a risk to the global economy.

Both U.S. President Donald Trump and his predecessor Barack Obama have shown interest in the vote.

Obama spoke with Macron over the phone on Thursday, and Trump said the following day he expected the killing of a policeman by a suspected Islamist in Paris to boost Le Pen's chances.

Previous militant attacks, such as the November 2015 killings in Paris ahead of regional polls, did not appear to boost the votes of those espousing tougher national security.

If either Macron or Fillon were victorious, each would face challenges.

For Macron, a big question would be whether he could win a majority in parliament in June. Fillon, though likely to struggle less to get a majority, would likely be dogged by an embezzlement scandal, in which he denies wrongdoing.

KATHMANDU, Mar 13: Voting to elect President has been underway in the Federal Parliament at New Baneshwar since 10 am today. ... Read More...

Govt’s directive has led to a semi-lockdown situation, lament tourism entrepreneurs
21 hours ago

FDI realization stands at 34 percent of the pledged amount in the past two and a half decades: NRB
39 minutes ago

Nepal thrash Malaysia by 69 runs, will take on the Netherlands in final
17 hours ago