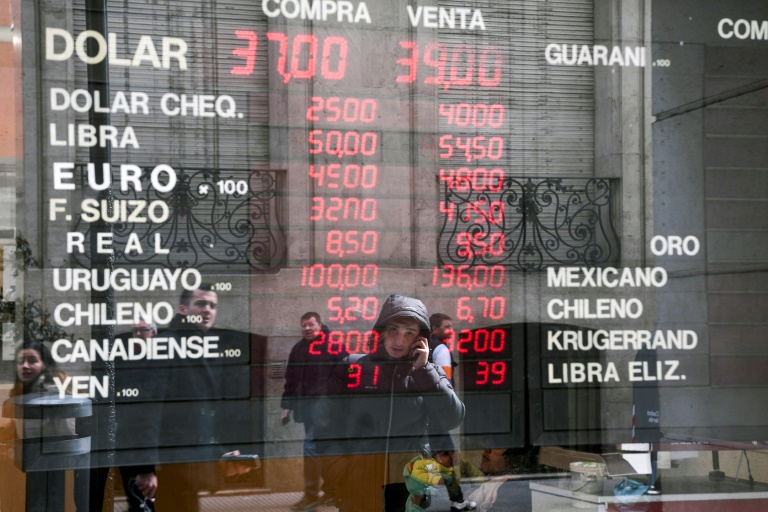 Dujovne will need to outline a convincing austerity program to restore investor confidence that has plummeted along with the nation's currency, analysts say.

The minister said at the weekend his mission was to "continue to progress" talks with the IMF "on additional disbursements in 2019."

The talks scheduled for Tuesday follow a surprise announcement by President Mauricio Macri last week that Argentina would seek faster disbursement of its $50 billion credit line with the IMF.

That set off alarm bells among investors, concerned Argentina will default on government borrowing, and triggered a run on the peso, which plunged 20 percent in two days before recovering slightly by Friday's close.

The currency has lost half its value against the dollar since January.

A first $15 billion tranche of the loan has largely gone to propping up the peso in recent months.

Argentina's Central Bank hiked its baseline interest rate to 60 percent last week in a further bid to stabilize the currency.

"Exchange rate volatility, as shown by recent pressure on the Argentine currency, could jeopardize the effective implementation of economic adjustment measures, absent further steps to boost investor confidence," it said in a statement on Friday.

S&P sees hope in Macri's austerity measures however, which has seen his government slash energy subsidies and shed 95,000 public service jobs since January.

It suggested that IMF help, coupled with continued austerity measures, could help gradually reduce inflation, which despite being a government priority, is still running at more than 20 percent.

The IMF said its goal was to "rapidly conclude these talks and submit the revised economic plan to the Executive Board."

Spokesman Gerry Rice said the Washington-based lender was "confident that the strong commitment and determination of the Argentine authorities will help the country overcome the current difficulties."

However, analysts at Capital Economics warned in a report that "investor confidence is fragile," adding that failure to deliver a convincing austerity plan on Monday would trigger further turmoil.

The market's response exposed the magnitude of the crisis of confidence in the Argentine government and its ability to pay off borrowing.

Dujovne is expected to provide details of the new proposals on Monday before heading to Washington for Tuesday's meeting with IMF officials.

Macri will be hoping to ride out a domestic storm from a public sector incensed at his austerity drive to maintain Argentina's access to capital markets, which it was excluded from for over a decade.

However, Argentines point to increasing food, transport and energy prices, saying they are paying an unacceptable price under Macri's austerity program.

A recent poll by the Center for the Study of Work and Development showed that one in two employed people fear losing their job.

Argentina has a bitter history with the IMF, which it last called on in 2001. Many Argentines view the tough conditions imposed by the crisis lender then as having made the crisis all the harder to bear.

LONDON, Sept 6: Andy Murray has been selected to lead Britain's team for the Davis Cup semifinal against Argentina next... Read More...