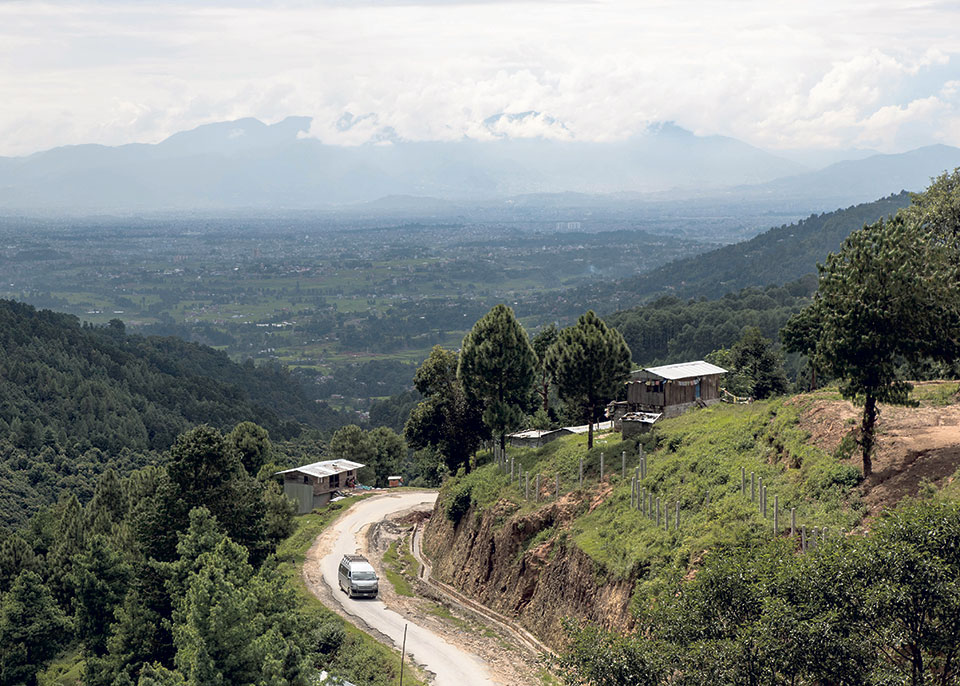 A tourist motor vehicle climbs up a hill to Nagarkot -– a popular tourist destination –- on the outskirts of the Kathmandu Valley. Work to upgrade the road to a double-lane road has been undergoing since 2014. Republica Files

KATHMANDU, June 4: Despite the government’s commitment to build infrastructure for tourism, the Kamalvinayak- Nagarkot Road -- the main access road to Nagarkot, a popular hill station on the outskirts of the Kathmandu Valley -- lies in a dilapidated state for the past couple of years.
Officials of the government say that negligence by construction company has caused delay to the road upgradation project.

Department of Roads (DoR) had awarded the project to Shailung Construction in 2014. According to the contract document, the project was supposed to be completed by 2016. The 16-kilometer road project faced several obstructions because of which it could not be completed on time, Murari Gautam, the spokesperson for DoR, told Republica. “Although the project began in 2014, it faced obstructions due to 2015 earthquakes, border blockade and lack of construction materials,” Gautam added.

The government has extended the project’s construction deadline by three times so far. The latest deadline expires in July, 2018. However, the construction company is unlikely to complete its work by then.

“As the project is almost certain to miss the extended deadline, we have fined it Rs 700,000. The penalty will be more severe in the coming days,” Gautam added.

According to government officials, the company did not expedite its work even after the situation normalized after the earthquakes of 2015 and border blockade. “The company was supposed to increases resources and workforce after getting extension of construction deadline. But it did not happen,” Gautam said, adding: “We were left with no option but to penalize them.”

Thought the construction company is getting another deadline extension, Gautam said he cannot say when the project will complete.

RAJBIRAJ, Sept 14: The dream project of the people of the Tarai belt, believed to do wonders in developing the entire... Read More...