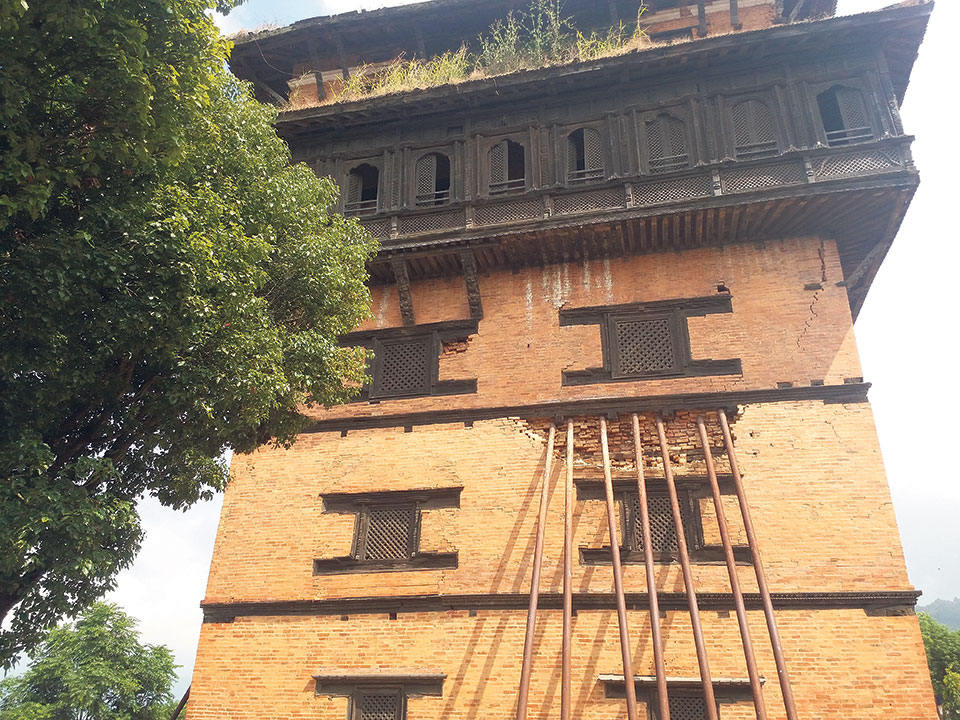 KATHMANDU, April 25: Even four years after the devastating earthquakes 2015, Nepal is still struggling to reconstruct hundreds of historical sites across the country.

Sindhupalchowk, is yet to rebuild 190 monasteries which were turned into rubble by the quakes. One such monastery is the Dukfuk Dindha

Rangzen, a popular meditational center for international tourists, which currently teaches meditation in temporary shelters. The monastery believed to be the place where Buddhist master Padmasambhava used to meditate is one of the 190 monasteries in Sindhupalchowk, destroyed by the catastrophic earthquakes.

The National Reconstruction Authority (NRA) reportedly possesses only the details of the destroyed monasteries. Other sites of great importance like ancient temples, and other pilgrimage sites destroyed by the quakes are not even considered to be reconstructed.

Similarly, the “Saat Tale Durbar” (seven-storey palace) in Nuwakot barely retains its past glory, standing with support of pillars.

Although the palace is said to be reconstructed with the financial and technical assistance of the Chinese government, the work remains stalled.

The site was observed and studied by a team consisting of the Chinese ambassador to Nepal and representatives of the United Nations Development Programme in the second week of June, 2018. The team had confirmed to begin work by September of the same year. However, the site stands untouched till this day.

Arjun Prasad Phuyal of the palace conservation office says he is doubtful if the authorities will begin the reconstruction before monsoon.

The magnificent Gorkha Durbar, with its back section almost completely destroyed by the earthquake has only its foundation stones laid. The reconstruction project originally planned to be completed by November 2019 was initiated in March of 2017. However, the negligence of the Department of Archaeology ( DoA) and Gorkha Durbar Caretaker Committee has resulted in minimal work in the site.

“The contractor does nothing and nobody seems to be concerned,” said Dipak Yogi, a local resident.

The 400-year-old palace, which remained unaffected by the great earthquake of 1990 BS, is believed to be constructed in the seventeenth century during the reign of then King Ram Shah. The palace is also said to be the home for seven generations of kings since Ram Shah, including of the unifier of Nepal King Prithvi Narayan Shah.

Visitors get disappointed upon visiting the heritage site. A section of the palace is still with scaffoldings and covered with corrugated sheets.

Several other historical sites across the country including in the Kathmandu Valley are also in tatters.

(Our correspondents Narahari Sapkota of Gorkha, Dhruba Dangal of Sindhupalchowk and Bhagwati Lama of Nuwakot contributed to this report)

GORKHA, Nov 7: Gorkha has now transformed into a hub for educational tourism. With students from all over the district... Read More...