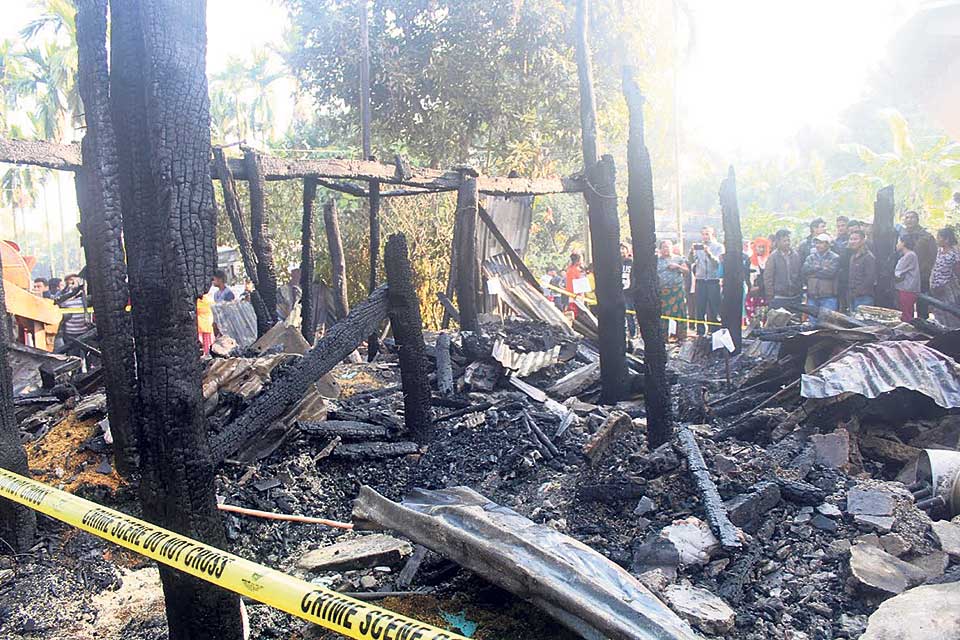 The house of Laxman Khanal after Sunday night’s fire, at Shivasatakshi Municipality in Jhapa district. Khanal, his wife and two children were killed in the fire. | Photo: Yuvaraj Biwas/Republica

DAMAK, Nov 26Four members of the same family were killed when a fire broke out in Laljhoda of Shivasatakshi Municipality-7 of Jhapa on Sunday night. All family members were fast asleep when the fire broke out in their home at around 10 pm.

The deceased have been identified as Laxman Khanal, 36, his wife Radhika, 30, their daughter four-year-old Chandra 'Supriya', and four-month-old infant Tikaram.

The fire also caused a gas cylinder to go off injuring a neighbor identified as Geeta Dhungel. She is currently undergoing treatment at a Biratnagar hospital.While the source of fire is not yet known, locals said that 50 liters of diesel stored on the first floor of the house turned the fire into an inferno. The victims were sleeping on the second floor of the house.“We made various attempts to douse the fire as soon as we noticed it,” said Shekhar Adhikari, a local.

“But the fire had already engulfed the house and there was little we could do."Sivasatakshi Municipality does not have fire brigade. Hence, fire brigade from Gauradaha Municipality was called, which arrived only an hour-and-a-half later. Although police had been informed about the fire immediately, they arrived an hour later. Left to fend for themselves, the locals struggled with the fire using tube well water and water pumps, but in vain. The fire was first noticed by a neighbor, Mukti Dahal, who had just come out of the house to go to toilet.

“I immediately tried to alert our neighbors and begun the rescue work. But the fire had already spread and burnt the staircase. It was also not possible climb onto the house from behind to rescue the victims,” he shared.Deceased Khanal, who was also the breadwinner of the family, had recently purchased a tractor to make a living, informed a neighbor Hima Sapkota.“His wife Radhika was with me the whole day while we took care of the infant. She shared that they were looking to build a new house after clearing the tractor loans,” recalled Sapkota, who was in tears.Police inspector Kailash Rai of Area Police Office, Jhiljhile, said they are currently investigating the incident.

1 killed in fire at Trump Tower in New York

NEW YORK, April 8: A raging fire that tore through a 50th-floor apartment at Trump Tower on Saturday killed a man... Read More...

RAJBIRAJ, Nov 3: A house fire sparked by a kerosene lamp has left a 12-year-old girl dead at Belhichapena-6 in... Read More...