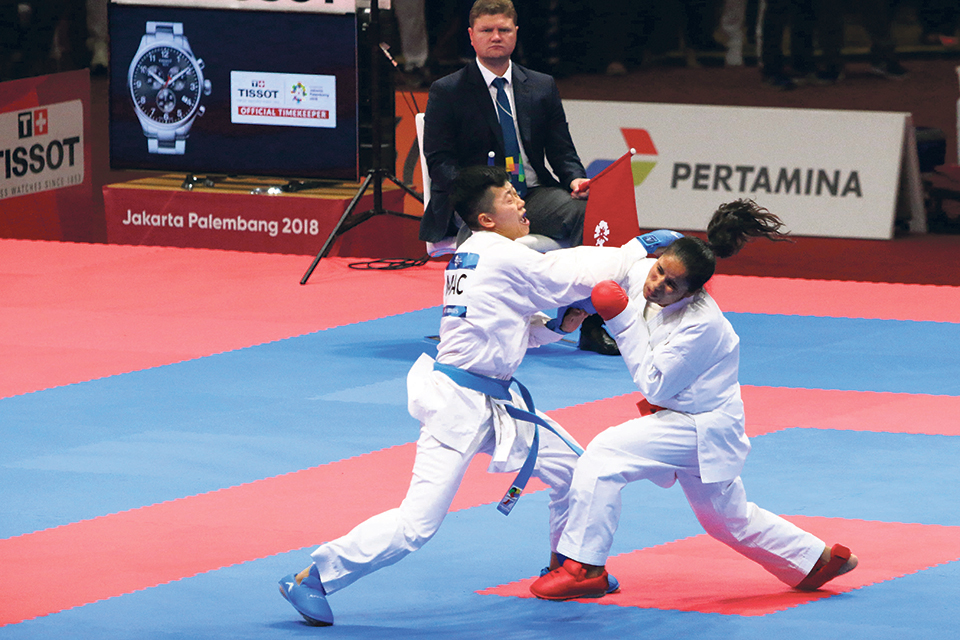 Thapa defeated Md Al Amin of Bangladesh in the men’s light welterweight (64 kg) category to book a final bout with Manish Kaushik of India, who earlier overcame Dinindu Du Ponnawila of Sri Lanka in another semifinal. Both Ponnawila and Amin had advanced to semis via bye.

Thapa was the only Nepali in the men’s competition to advance to the finals on the second day as Sushil Thapa Magar, Puran Rai and Arjun Sigu all bowed out of the semifinal contest at the Karate Academy Hall in Satdobato.

Magar, who had secured the semi spot beating Sajeewa Nuwan Mutunaka of Sri Lanka on Friday, lost to India’s Vidon Tanwar in light flyweight (49 kg) category. Tanwar will battle for the gold against Tashi Wangdi of Bhutan, who earlier beat Bangladesh’s Md Sojib Hossain in another semifinal of the category.

Rai, who had advanced to the semis through a bye, lost against Md Robin Mia of Bangladesh in men’s bantam weight (56 kg) category. Mia will face India’s Sachin in the finals who beat Naqeebullah of Pakistan in another semi later in the evening.

Sigu lost to India’s Gaurav Chauhan in the men’s heavyweight bout (91 kg weight category). Gaurav will fight against Pakistan’s Sanaullah in the final.

But it was a good day for Nepali women boxers as all three were victorious against their rivals.
Maharjan saw off Nadeeka Pushp Ranasinghe of Sri Lanka in light flyweight (48 kg) category to advance into the finals. She will meet India’s Kalaivani Srinivasan in the finals, who earlier beat Lhamo Tandin of Bhutan in another semifinal. Maharjan had advanced to the semis via a bye.
Gurung beat Mst Onita Islam of Bangladesh in bantam weight category (54kg) to book the gold battle against Shiksha of India, who earlier beat Sajeewani Muthuthanthri of Sri Lanka.

Likewise, Sunar book the final clash against India’s Praveen in the light weight (60kg) category after she registered a victory over Keshani Hansika Kasturi of Sri Lanka in the semis. Praveen directly advance after she got bye.

There is still a hope for Nepal to end the 20 year wait for the boxing gold in the regional games but will have to break through the mighty India’s rampage.
India has dominated the boxing in all weight categories as no Indian boxers have lost a single match this edition, already booking eight final clashes on the second day---four of them against Nepal.

Trump says U.S. election winner might not be known for months
19 hours ago
Regulator makes yet another promise for strict market monitoring during festivals
5 hours ago