Four-lane road in Gaighat near completion 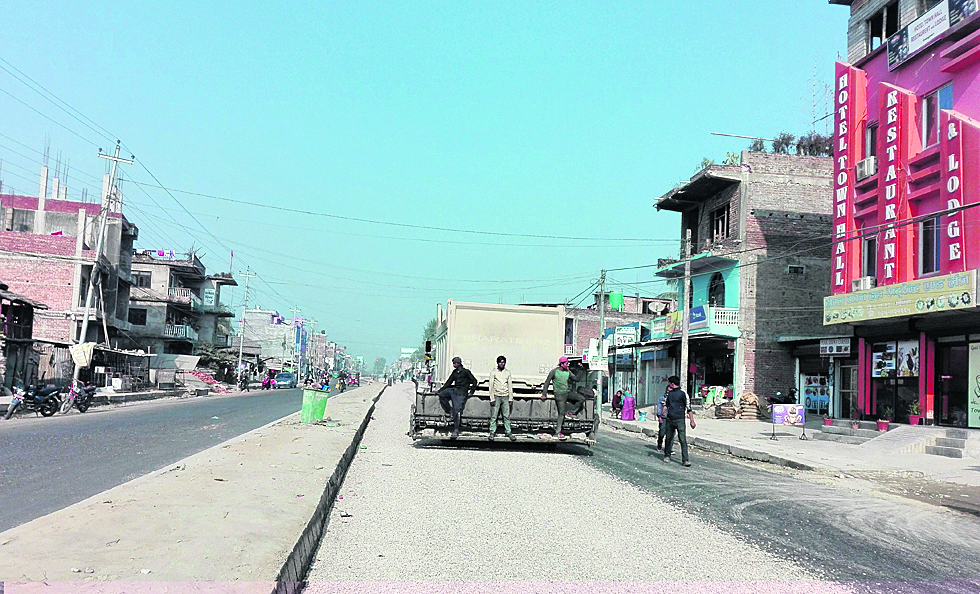 UDAYAPUR, Dec 30 : The construction of a four-lane road in Gaighat – the district headquarters of Udayapur – is nearing completion.

The deadline of the project has already been extended three times. It was initially scheduled to be completed in October, 2018.

The latest deadline for construction on 940-meter stretch from Triyuga Bus Park to Gaighat expired in June. Surya Construction, the contractor of the project, had gone out of contact after the deadline expired. But it returned to work after the implementing agency – Gaighat-Diktel Road Planning Program – as well as Triyuga Municipality warned it of strong action. It has expedited works since then.

The total cost of the project is Rs 90.98 million.

"Blacktopping work is underway at present. If everything goes as planned, it will be completed in one and half months," he added.

The construction company deployed workers in both day and night shifts in the past month as instructed by the Division Road Office, Udayapur.

According to Gyawali, the contractor has already filled soil in the median.

"Now, we will need to install solar lights and plant flowers and small trees in the media," he added.

Locals are hopeful that Gaighat bazaar will get a facelift once work on the four-land is completed. Ramu Rai, a local, said that the road with solar lights and garden in the median will be a major attraction in Gaighat bazaar.

UDAYAPUR, Nov 24: Even the shops in Gaighat, the headquarters of Udayapur district, sell expired goods which are rampant in... Read More...

GAIGHAT, Oct 3: The District Court, Udayapur on Tuesday has sentenced a 10.5-year jail sentence to five persons for their involvement... Read More...