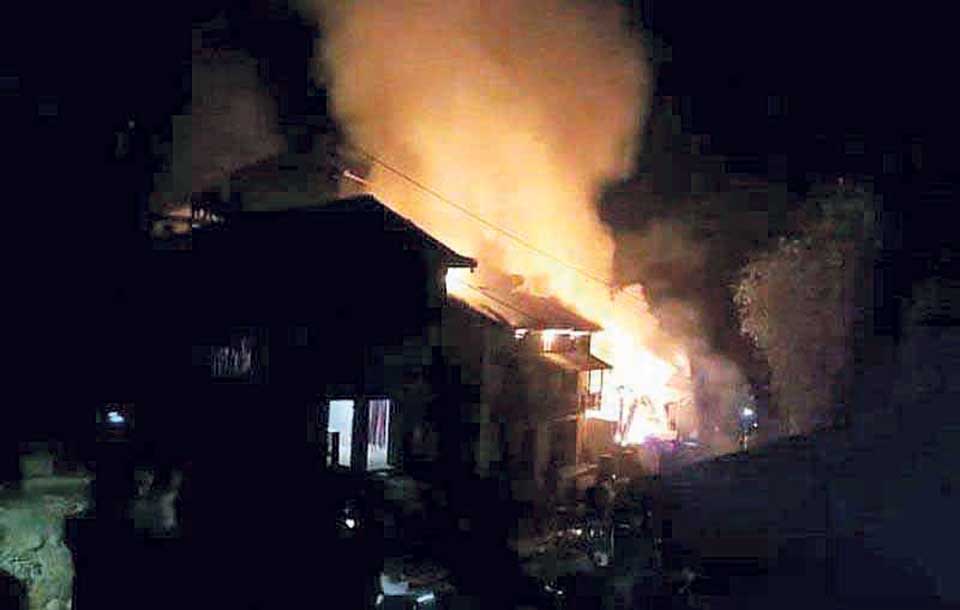 Plumes of smoke rise from houses on fire at Halesi Bazar on Tuesday evening.

The fire had started from the house of local businessman Magam Rai of Halesi Tuwachung Municipality-7 and  engulfed the adjoining houses of Uchit Bahadur Rai, Tambaraj Rai and Ambaraj Rai.  According to police, the houses of Prakash Chandra Giri, Regindra Rai and Gopin Rai were partially damaged. The fire also gutted a nearby tent. The fire which started at around 7 pm was doused after three hours. The cause of the fire is still not known. In order to stop the fire from spreading, one of the houses of the settlement was demolished, informed Iwan Rai, the mayor of Halesi Tuwachung Municipality.

At first, officers of the Area Police Office, Halesi and locals fought the fire and later they were joined by Nepal Army and Armed Police Force personnel. Shortage of water in the area made the fire-fighting work challenging.

According to preliminary investigation by police, gas leak in the kitchen has been suspected to be the reason for the fire.

Security personnel and locals doused the fire on their own as the fire engine took a long time to reach Halesi from the fire station at Rupakot Majhuwagadhi Municipality due to long distance.

KHOTANG, April 10: Four houses were reduced to cinders when a fire broke out in Ratamate of Halesi Tuwachung Municipality-5 on... Read More...

11 houses gutted in fire in Humla

RAJBIRAJ, Jan 4: A fire in Boriya VDC of Saptari on Tuesday killed livestock and gutted properties worth Rs 500,000. Read More...

Five buried in Sindhupalcowk landslide; One dies, four others go missing
27 minutes ago