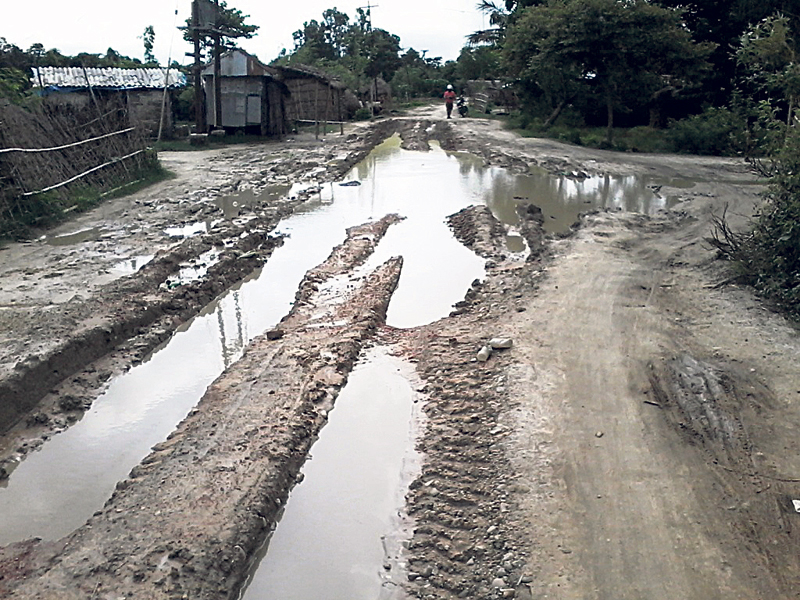 This recent photo shows a section of Postal Highway in Rajbiraj. ( Republica )

RAJBIRAJ, Sept 14: The dream project of the people of the Tarai belt, believed to do wonders in developing the entire region, is headed nowhere as the construction of the Postal Highway has been lingering for over four decades. Blames are put on ‘irresponsible Indian contractors’, non-cooperative locals of the VDCs alongside the highway and apathetic government attitude, among others, every time the issue comes under discussion. Whatever might have caused it, the highway is in dire condition with simply no signs of blacktopping and fast disappearing gravels in the 1700-kilometer track.

Extremely frustrated with the delay in addressing the highway issue, an engineer remarked that the leaders, whether from Madhes or Kathmandu, never want the road to function well. He argues that once the road is operational and smooth, it will completely change the economy of Madhes.

According to Shyam Prakash Yadav of Madhepura VDC, the highway becomes one of the topmost issues during every election. During the first Constituent Assembly (CA) election, it was the main priority of the political parties. In the second CA election, it was touted as the issue to be addressed urgently.

“However, nothing happened post elections. The road condition is very pathetic,” said Yadav. “We have no other choice and this road is too unsafe to use,” he added.

During his visit to Rajbiraj last week, Transport Minister Ramesh Lekhak stated that the highway is the topmost priority of the government. However, he did not mention by when the project would be completed.

“There is some investment from India and some from Nepal. The project is in government’s priority list,” he said. Earlier, during construction of several road sections of the highway, Indian contractors had left job without giving headway to the project.

Locals on the other hand remarked that the highway could not get attention even from late Girija Prasad Koirala, who had several times termed it as ‘Kangresi Highway’ (highway in priority of Congress).

“Even though he was the prime minister for several times, the highway never got attention. Similarly, many other leaders, including Madhesi leaders have been in top positions in the government, but nobody cares about the road when they are in power,” said Karna Dev Chaudhari, a local of Pathhargada village that lies along the highway.

He added that they grew up hearing about the highway and the next generation has grown up the same way. But there is least chance of the highway ever getting completed, he noted.

“It has been four decades, we have heard about it, but until and unless the leaders are honest, real development will not take place in this country,” he remarked.

Rampant sand mining in Rapti in pretext of Postal Highway

NEPALGUNJ, April 30 : Excavators are seen extracting sands and gravel from Samshergunj area of Rapti river round the clock.... Read More...