Foundation stone laid for the longest suspension bridge of Nepal 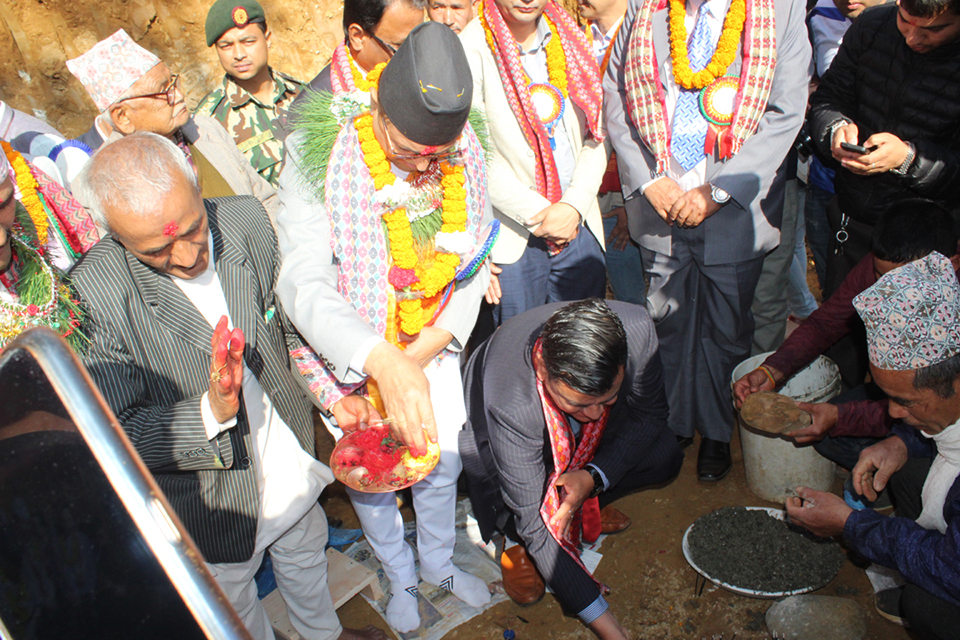 BAGLUNG, March 24: The foundation stone for the construction of the longest suspension foot-bridge in Nepal, which stretches from Bangechaur of Baglung to Aduwabari of Parbat, has been finally laid on Saturday.

Ganesh Timlasina, chairperson of the National Assembly, inaugurated the 567 meters long bridge over the Kali Gandaki river. This project has been creating a buzz since the last two years. This project is expected to be completed within the next two years. This bridge will be 138 meters high, according to Ram Chandra Shrestha, director general of the Department of Local Infrastructure.

Shrestha stated that the project could not kick-start on time in lack of resources.

"As the bridge will be longer than any other suspension bridge of our country, we don't have a lot of machines and equipment required for its construction," said Shrestha, adding, "We have expedited the procedure for importing machines from China."

Contractor companies Thani/BLT/Himshikhar JV have accepted the contract for Rs 79 million. Narahari Khadka of Himshikhar Construction informed Republica that the project would be completed within the next two years.

"If there are no obstructions, the project will be completed within the next two years," Khadka claimed.

Usually, locals have to walk for almost two hours to reach Pang from Baglung Bazaar. However, after the construction of the suspension bridge, the time will be shortened to only 15 minutes. Construction of the bridge over the Kali Gandaki river is expected to contribute to tourism development as well.

"By spending a huge budget today we have started the procedure for the construction of the longest suspension bridge of the country," said Timalsina, adding, "This physical infrastructure must assist our economic development."

As most candidates had made this bridge a common election agenda during the local elections, Janakrah Poudel, mayor of Baglung Municipality, said, "This bridge will not just shorten the distance but will play a pivotal role in the economic development of the local units."

He says it will also contribute to the development of tourism, agriculture, education among others.

KATHMANDU, Dec 5: President Bidhya Devi Bhandari laid a foundation for the building of Office of Auditor General amid a program... Read More...

CHITWAN, Nov 17: Minister for Land Reforms and Management Bikram Pandey has said bridges would be constructed over the rivers... Read More...