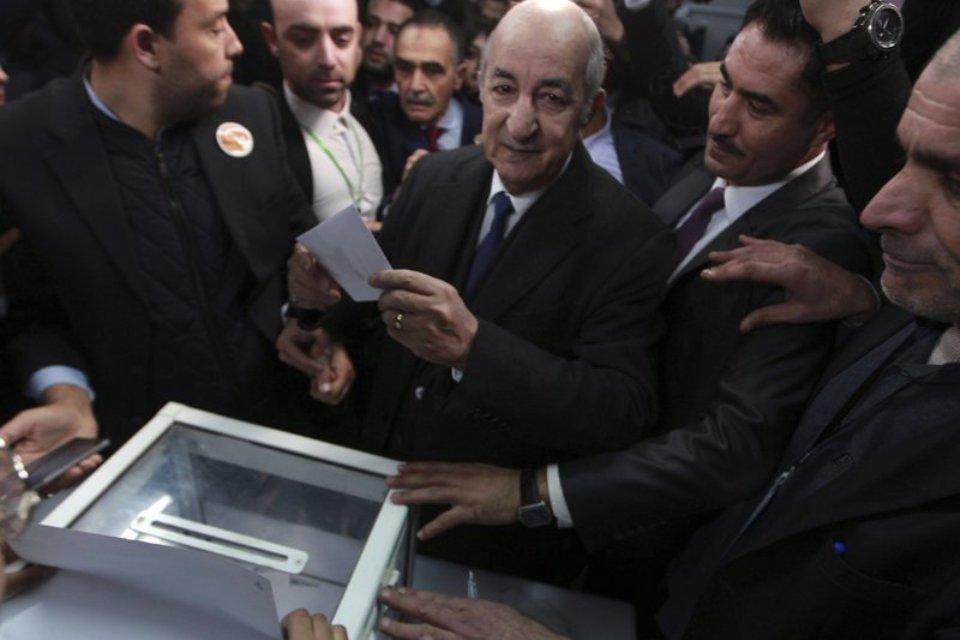 Presidential candidate Abdelmadjid Tebboune casts his ballot at polling station, in Algiers, Algeria, Thursday, Dec. 12, 2019. Five candidates have their eyes on becoming the next president of Algeria _ without a leader since April _ in Thursday's contentious election boycotted by a massive pro-democracy movement. (AP Photo/Fateh Guidoum)

Tebboune, 74, received 58.15% of the vote in this oil-rich North African country, according to the head of the National Independent Electoral Authority, Mohamed Charfi. Turnout was just 41%.

Tebboune served briefly as prime minister in 2017 under ex-President Abdelaziz Bouteflika, who was ousted from power in April by a massive pro-democracy protest movement. Powerful army chief Gaid Salah is a much-criticized figure among members of the peaceful movement that began in February and has been called Algeria’s Arab Spring.

The election of an establishment figure provided little hope of changing the protesters’ view that the poll was rigged in favor of the old regime. Instead of new faces, two of the candidates were former prime ministers.

Tebboune endured insults and protests during the 22-day campaign and he canceled his final rally in the capital, Algiers. Thousands of protesters took to the streets on election day Thursday chanting “No to elections of shame” and “Generals in the garbage.”

Algeria is one of the most youthful countries in the world, with two-thirds of the population under 30. A quarter of those youth are out of work, creating frustration against the country’s veteran rulers and the policies that have left them behind.

The electoral authority was recently created in an attempt at transparency in a nation where leaders were thought to be chosen in advance. The turnout in this vote compares to the nearly 52% turnout in 2014, which approved Bouteflika’s final mandate.

Crossing the divide
12 hours ago

Our mountains are safe and pristine: Minister Bhattarai
1 hour ago