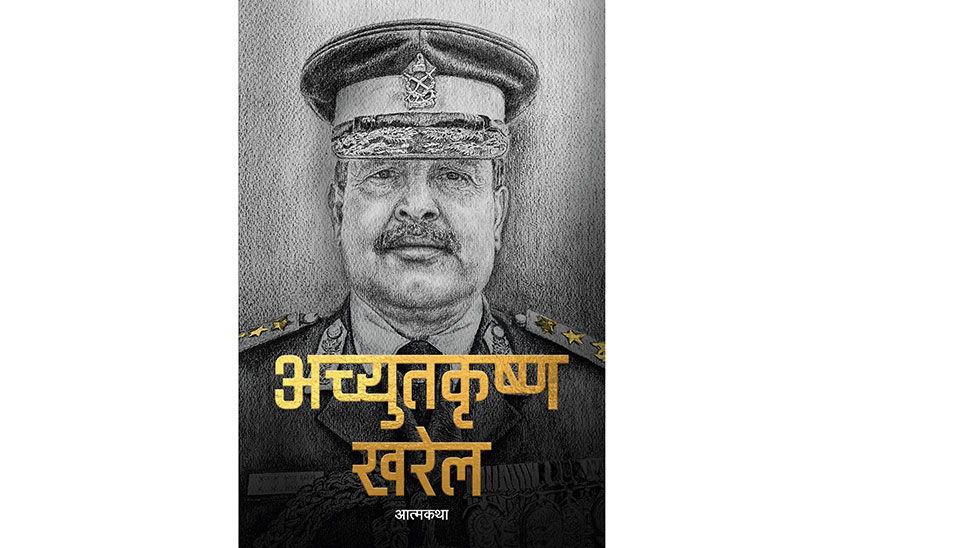 Kharel received an offer to keep 2 million rupees ready, if he wanted to become chief of Nepal police.

The offer had come when the government was at the verge of collapse and formation of a new government was widely rumored. Kharel was utterly confused.

What was his next move? Did he accept the offer to get promoted ?

Former IGP of Nepal Police Achyut Krishna Kharel’s autobiography reveals such incidents and people in a manner it came into being. The book scheduled to be released at the end of this week contains many such interesting incidents, characters which makes the book an interesting read.

Kharel was a passionate footballer. Football led him to the police force. As time passed he not only led the police team but the National squad as well. He then went on to lead the entire police force.

Kharel earned much appreciation as a player. To the contrary, his service in police earned him many foes. From his early days in police, he confronted smugglers and goons in Chitwan and Bhairahawa. He would cross the border following the bandits creating terror in the bordering settlements of Rupandehi. As he encountered crime, politicians would come in defense. He had to tackle with many such intervening situations.

As Nepal deals with the infamous 33 kg gold smuggling case, Kharel’s book reveals deep connection of the gold network in Nepal. He also writes how the then Palace was involved in this illegal trade. Restoration of multi-party democracy in 1990 also proved to be the change of guard for the gold trade. Few leaders from the political parties started acting as pressure points for the trade. Kharel’s book reveals such incidents in detail.

The arrest of Former Police IGP DB Lama and former Prince Dhirendra’s ADC Colonel Bharat Gurung was a controversial high-profile case. Kharel was given the responsibility of recording testimony from these two high profile implications. This was the case of immense public interest along with deep interest from the Palace. Kharel has explained various facets of this case.

6th August 2000 was a challenging day for the police force. A musician named Pravin Gurung died in a hit and run case. The car happened to belong to a royal family member. A lot of manipulation was attempted to subside the case. Kharel reopens the case in his book.

In addition to the events and incidents of these kinds, Kharel has also written about political intervention in promotion and posting of police officers. He also talks about how a culture of appeasing seniors and reposting officers is practiced within the force.

Kharel’s life seems to be a perfect kaleidoscope to look into the political wrangling through the eyes a policeman. He was a star cop during the panchayat era. He dealt with the then Panchayat heavy weights and the Palace. He served during the student’s movement leading to a national referendum of 1980. He was asked to take charge of Kathmandu’s security during the 1990 people’s uprising. He was even blamed for suppressing the movement.

After the restoration of democracy, Kharel moved to higher positions and witnessed many transitions. During his high office at the Police service, Kharel had to work and maneuver through a complex relation between the political parties, palace, bureaucracy and the Royal Nepal Army.

Kharel explains the advent of politicizing of the police force. He faced it right from his appointment to the high office of the police command. As the Maoist conflict escalated, Kharel witnessed a frustrating interrelation between politics, palace and the army. After the Dunai attack, he resigned.

IGP Kharel’s story accounts a life of a policeman and also portrays the pitiful situation of the sports sector during his time. Unfortunately, both the situation remains indifferent after all these years.

“I did not write my story for self-glorification. My primary objective is to document my experiences to prevent misinterpretation of the events I witnessed unfolding.” Said Kharel. “This will also facilitate the people’s right to information.” He added.

“History is reflected through the life of the characters and their experiences. Their personal experiences portray the psychosis of the society they live in,” said Saijan Maskay of Publication Nepalaya. “IGP Kharels story helps understand several important episodes of social and political relevance of the Panchayat era and the period after the restoration of democracy.” He added.

KATHMANDU, Sept 6: Ace comedian Madan Krishna Shrestha is well known for his hilarious acts. With the launch of his first... Read More...