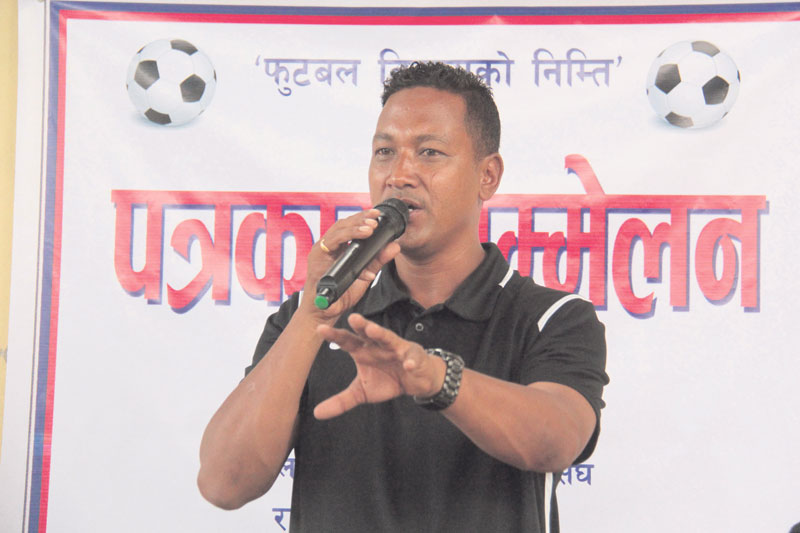 KATHMANDU, Sept 20: Former captain of Nepali national football team Uprendra Man Singh has announced his candidacy for the post of vice president of All Nepal Football Association (ANFA) on Monday.

Organizing a press meet at the semi covered hall of the National Sports Council, Tripureshwar, Singh said that his vice presidential candidacy is for development of Nepali football and to represent the voices of the entire football players, coaches, referees and other people, who have devoted their lives for Nepali football, in the policy-making level of ANFA.

“To take the development of Nepali football to a new height by resolving the existing issues, all three organizations - ANFPA, NFCA, NFRA - proposed my name for the post of vice president of ANFA and I accepted the offer,” Singh said during the press meet.

Earlier, the joint meeting of ANFPA, NFCA, NFRA had proposed Raju Kaji Shakya for the post of vice president but Shakya couldn't accept the offer due to busy coaching schedule and his personal issues. The meeting then offered the proposal to Surendra Shikhrakar, president of NFRA, but he also declined it as he is a government officer and can't take part in the election.

Then, the offer was given to Upendra Man Singh. “Our joint meeting proposed Raju Kaji Shakya and Surendra Shikhrakar for the post of vice president as both of them are senior to me. When both were unable to accept the offer, I was proposed as the candidate for vice president,” clarified Singh.

Surendra Shikhrakar said that all three associations of players, coaches and referees are united for the development of Nepali football.

Singh, who is an independent candidate, said that there is no any agreement with any panel at this moment over potential coordination in the election.

However, he said that there have been discussions over that subject in the joint meeting among the three associations.

“I played professional football for many years. I have experience of coaching and experience of management. I am also working in the team management of Madhyapur Youth Association. So I think these things make me perfect candidate,” Singh said when asked whether he has enough experience to be at top post of ANFA.

The ANFA is holding the election for the vacant posts of president and vice president as Ganesh Thapa was suspended as ANFA president last year while vice president Lalit Krishna Shrestha passed away about a year ago.

4.4 million doses of Vero Cell vaccines arrive in Nepal on Friday
15 minutes ago