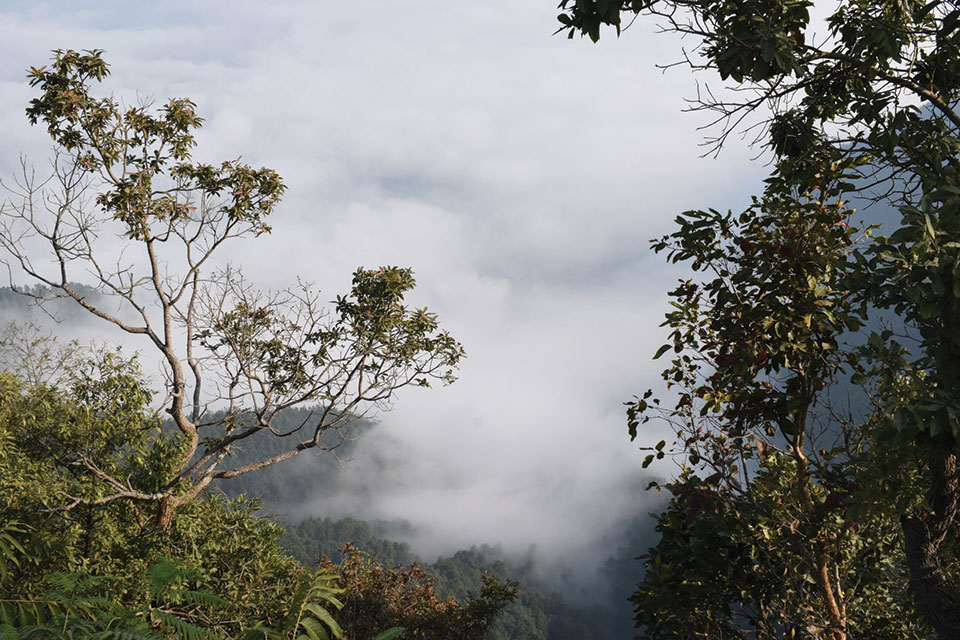 The author is an Australian journalism student doing photojournalism internship in Nepal
news@myrepublica.com

Until a few years back, Bandipur had no tourist appeal and was a virtual ghost town. Now the city offers a unique atmosphere that transports the travellers back to less modern times

A few decades ago Bandipur was but a whispered name amongst locals. It had no tourist appeal and was a virtual ghost town, until a few years ago. They marketed the city as traditional and began renovating the old wooden, hand carved houses and buildings, creating a unique atmosphere that transports the traveller back to less modern times. Walking down the stone steps of Bandipur to the left are the traditional buildings standing tall and proud, to the right are the mountain ranges and the beautiful scenery, and all around are the smiling faces of the locals.

A short walk away is Tundikhel. A beautiful viewpoint of the Himalayas, sitting at 1030 metres above sea level and directly in front of the mountains offers the breathtaking landscape. Looking out towards the horizon the peaks of the Himalayas appear to be floating amidst a sea of clouds that stretch as far as the eye can see and hide the landscape below in a white haze of cotton candy proportions. In the opposite direction a group of school boys are playing with a spinning top during their break period, and are creating quite a ruckus—debating over who can spin the top longest on their hands.

Walking away from the viewpoint and the young boys, I watched as an elderly woman prepared a dish favourite among young teenagers, chat pati (a variety of spices, sauces and flavours smothering potatoes and cucumbers) surrounded by her children. I am taken by the closeness of these Nepali families, their society thrives on supporting one another and keeping in contact. Even the grandparents are important members often taking care of the grandchildren so the parents can work.

These grandparents often travel down from rural areas hidden amongst the mountains. On one of these mountains I discovered a monastery sitting on top of the world in its own slice of the mountain standing out yet blending in with its natural surroundings. Prayer flags blew with the wind whispering promises of happiness, love and prosperity. If you sat still for long enough it’s possible to hear the almost silent prayers being answered as the flags move with the wind creating both a peaceful and picturesque atmosphere.

Trekking to the cave
Standing at the peak of the mountain next to the monastery, I looked down at the fog that gripped the trail to the cave. The fog was thick and dense curling like smoke around the mountain’s edges and making it impossible to judge the distance to the bottom. I took a deep breath and plunged into the foggy abyss.
The trail was steep, carved out of natural rocks stuck together with mud some as slippery as ice while others were stiff and caused your knees to buckle upon each step. Natural foliage threatened to overrun the path, creating a beautiful and chaotic experience where one could mistake a flat line of bush as a suggestion of a trail and a wrong turn may lead to a lost traveller. If a traveller were to lose their way not all would be lost. There are some beautiful rocks that would make for sturdy campsites. Just be mindful of the wild monkeys lurking in the trees and the possibility of tigers prowling the area.

The trek to the cave was gradual but steep. My calves were begging for a rest when I finally saw the signpost. Left for the renowned cave or right to visit the secret cave dwelling. If you go right and walk for a couple of minutes you will find a cave that is both deep and wide with a large mouth threatening to swallow you whole, where a hot wind gushes out. To the left is where the true destination awaited. The cave, or as I like to call it “the darkest place on earth.”

Entering the cave was an almost daunting experience as the natural light only stretched a short distance into the eternal darkness. The floor was slippery and the walls jutted out at peculiar angles creating images the tour guide labelled as either animals or reflections of the Hindu religion.

The most prominent rock sculpture I felt was the roaring tiger which rested in the centre of the cave high above, watching all who entered. Navigating the cave was tricky but the guide was experienced (I think he could almost do the tour without the tiny flashlight) and he suggested the best route when tackling steep climbs and descents. At challenging points a rope was available to hold while rock climbing (the guide would flash his light at the spots where you should put your hand and feet).

Another point can be reached at the far end of the cave if you are willing to traverse a large gap of rock on a rickety ladder before standing on a crumbling platform and descending down to ladders tied together so they stretch the height of the cave.

To say the cave was dark is an understatement. The torchlight offered little support but provided some guidance. It was terrifying when the guide said ‘stop and turn off the lights.’ For two minutes the pitch black stretched around me but at the same time I felt overcome by a wave of claustrophobia. It felt like the cave’s walls were closing in and an irrational fear nagged the back of my mind. Relief washed over me as light entered the cave again and I could see the exit. It had only been half an hour but it had felt like years had passed.

Upon exiting the cave I was greeted by an energetic dog wearing a bell who acted as a guide down the mountain. For the whole descent the dog led the way stopping to check if I was still coming. And at the end he paused to make sure I knew where to go for the rest of the way.

The author is an Australian journalism student. She was recently in Nepal doing photojournalism internship

SIRAHA, Dec 3: Nanu Dahal has frequented Bandipur of Siraha several times in her life. But it was never easy as... Read More...

As the weather changes from being muddy and rainy to clear and beautiful, the number of domestic tourists increases in... Read More...

Central govt recommended to provide Rs 152.51 billion in fiscal equalization grants to provincial and local govts for next FY
19 hours ago