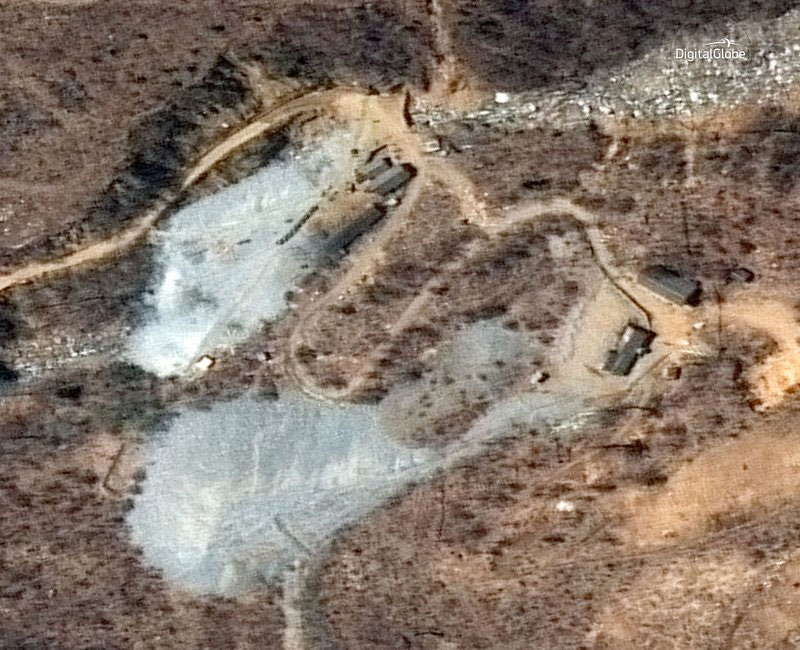 WONSAN, North Korea, May 22:  A small group of foreign journalists arrived in North Korea on Tuesday to cover the dismantling of the country’s nuclear test site later this week, but without South Korean media initially also scheduled to participate.

Pyongyang is allowing the limited access to the site to publicize its promise to halt underground tests and launches of intercontinental ballistic missiles. It unilaterally announced that moratorium ahead of a summit between leader Kim Jong Un and President Donald Trump scheduled for June 12 in Singapore.

The eight South Korean journalists were excluded because Pyongyang has cut off high-level contact with Seoul to protest an exercise with the U.S. military — a protest the North’s media reiterated Tuesday, saying saber-rattling and dialogue don’t mix.

Such messages from the North and Trump’s statements he is ready to call it all off have heightened concerns about the success of the summit and prompted South Korean President Moon Jae-in to travel to Washington, where he was to meet with Trump in Washington later Tuesday.

The group that arrived by charter flight from Beijing is made up of media from the U.K., Russia, China and the United States. The journalists, including an Associated Press Television crew, will stay at a hotel in this port city on North Korea’s east coast before traveling by train to the site, which is in the northeastern part of the country.

The dismantling ceremony is expected to be held in the coming days, depending on the weather.

The North’s decision to close the Punggye-ri nuclear test site has generally been seen as a welcome gesture by Kim Jong Un to set a positive tone ahead of his summit with Trump.

But it is mainly just a gesture.

The North has already conducted six underground tests at the site — including its most powerful ever, last September — and Kim told ruling party leaders last month that further testing is unnecessary.

North Korea could build a new site if it decides it needs more testing or could dismantle the tunnels into Punggye-ri’s Mount Mantap in a reversible manner. Details of what will actually happen at the site are sparse, but Pyongyang’s apparent plan to show the closure of the site to journalists, not international nuclear inspectors, has been raised as a matter of concern.

The North’s decision to exclude the South Korean media, however, was a more troubling sign of discord.

The South Koreans were expected to participate in the trip, but were left behind in Beijing after the North refused to grant them visas. South Korea’s government expressed regret over the decision, but said it still hopes the North’s dismantling of the site proceeds as planned and proves to be a genuine step toward denuclearization.

The exclusion, a sharp departure from the conciliatory mood between the Koreas since the South hosted the Olympics in February, deepens a standoff that began last week when Pyongyang signaled it would cut off all high-level talks with Seoul in response to the joint military exercises.

The North claimed the exercises involved U.S. strategic nuclear assets — including nuclear-capable B-52 bombers — and violated the spirit of detente on the peninsula. Washington denies the bombers were part of the drills.

The North’s official media slammed the drills again on Tuesday.

“If the U.S. and the South Korean authorities persist in the confrontation policy and war moves against the DPRK, oblivious of this fact, they will be held wholly accountable for all the ensuing consequences,” said a commentary in the daily Minju Joson. “Dialogue and saber rattling can never go together.”

Along with its anger over the drills, Pyongyang has warned Kim might “reconsider” the U.S. summit over hard-line comments from Trump’s new national security adviser, John Bolton.

Bolton suggested the North must denuclearize before it can receive any reciprocal benefits from Washington. Pyongyang insists the precondition for denuclearization is for the U.S. to end its “hostile policy.”

TOKYO, Sept 3:  North Korea announced it detonated a thermonuclear device Sunday in its sixth and most powerful nuclear test to... Read More...