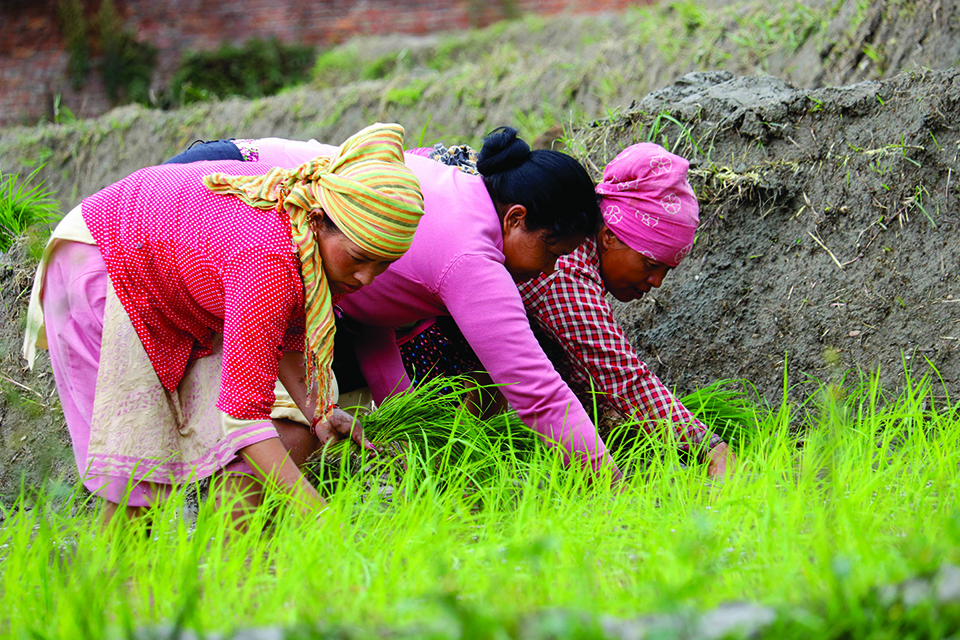 Although agriculture is a prioritized sector in policy document and donors are involved in its development, it stands at seventh position to receive foreign aid

Nepal has been a recipient of foreign aid for agriculture development since 1951. In the earlier days, aid used to be almost in the form of grants. And aid packages had larger technical support components, and less financial assistance. The bulk of assistance used to be directed toward developing manpower, establishing farms/stations, and introducing and testing of technologies.

The main objective of Tribhuvan Rural Development Program was to implement an agriculture expansion program in the rural areas. It was the first step taken for organized development of villages. Learning from the experiences of other countries, Nepal started agriculture extension program and a collective development system. It implemented various farm-related programs in different parts of the country.

The Rapti Dun Development Department was established in 1957 with the objectives of alleviating the food shortage in Kathmandu, establishing cooperative demonstration farms and implementing resettlement program.

By the end of the 1980s, the majority of foreign assistance received from multilateral institutions such as the World Bank and Asian Development Bank was mostly in the form of loan assistance.

Although agriculture is a prioritized sector in the policy document and many donors are involved in its development, it is in the seventh position to receive foreign aid. Technical Assistance (TA) component comprises nine percent of the total commitment in this sector.

Though development partners are providing millions of dollars as assistance in agriculture development every year, effectiveness of aid has been an issue for both the recipient and development partners. Both donors and government are equally responsible for the poor performance of the aid.

In order to insure its effectiveness, donors should be transparent on providing their assistance, eliminating unnecessary conditionality to the recipient government. However, conditionality on cross-cutting issues such as governance, inclusion, accountability, transparency, political stability should be welcomed by the government.

Furthermore, there is seemingly a mismatch of priorities between the development partners and government in planning and implementation. For example, infrastructure development is the government’s priority, but the donor agencies are interested in those projects which give outputs in short term.

The Agriculture Perspective Plan (APP), which was also prepared by the ADB, was the priority of the government, but it failed to attract investment due to a decline in donor support to the agricultural sector from the mid-1990s in the name of economic liberalization. Donor support to agriculture started to decline from the mid-1990s following economic liberalization which coincided with the government discontinuing farm subsidies. The agriculture sector used to receive 17-18 percent of the official development assistance (ODA) until the Seventh Five-Year Plan (1985-90) which has plunged to 3.8 percent now.

This contradiction has created resource gaps and caused overlapping and duplication. Thus to make effective disbursement of foreign aid in prioritized sectors, political, economic, socio-cultural and technological (PEST) analysis should be made mandatory for all projects. The government must also be working responsibly.

As mentioned in foreign aid policy, broader objectives of any agriculture projects should have a component of poverty reduction by ways of utilizing foreign aid effectively through high inclusive and sustainable agriculture growth with distribution equity, focusing on productive employment and income generation. These objectives have remained limited to paper.

Massive corruption, unaccountable and nontransparent government mechanism are major constraints that often hinder effectiveness of foreign aid in agriculture. Accountability is a precondition to ensure aid effectiveness. And accountability can be ensured when transparency is maintained in the way aid is managed and used.

Development partners in Nepal have a history of trying to cocoon their projects using free- standing technical assistance, independent project implementation units, and foreign experts rather than trying to improve the institutional environment for service provision. National Agriculture Research and Development Fund (NARDF) was established in 2001 with a noble objective of mobilizing funds for competitive grant projects through a one-window system. It has not been properly implemented.

There are many donor funded projects under Ministry of Agriculture, Land Management and Cooperatives mobilizing their funds independently for the competitive grant projects. In many project areas, their programs are often duplicated.

The agriculture sector is back in the priority list of donors after having faded from their radar for a number of years. The Agricultural Development Strategy (ADS)—a 20-year visionary strategy with a 10-year action plan and prepared with the support of 11 donors along with their investment commitments—is now at implementation stage. But it has been implemented without giving due considerations to the lessons learnt from the past.

KATHMANDU, Feb 25: The Election Commission (EC) has decided not to accept any foreign aid for holding the upcoming local elections,... Read More...