For the love of classical music 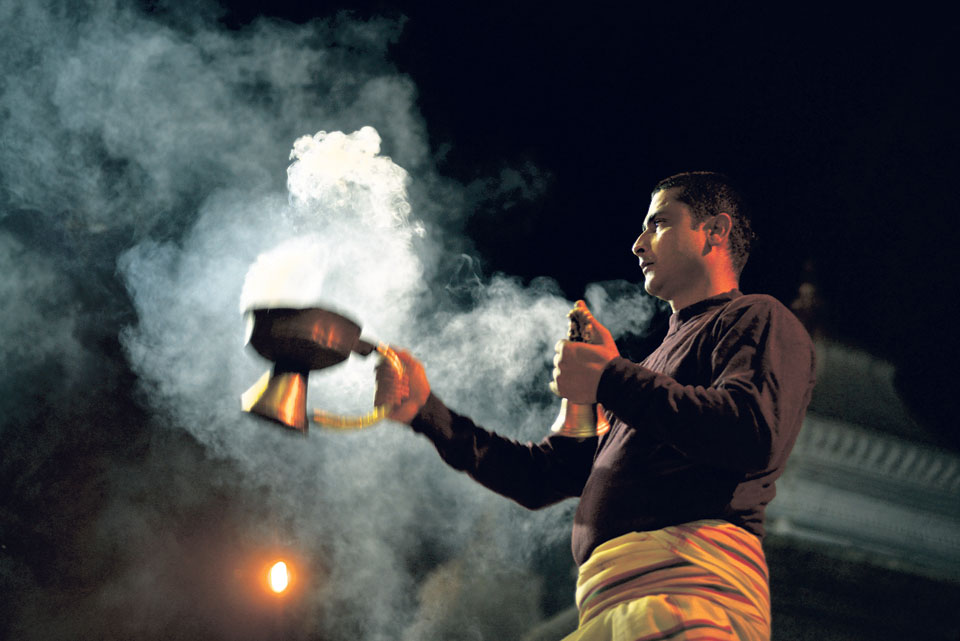 Every evening at the Pashupatinath temple one can see hundreds of people sitting on the stone steps facing the banks of the river Bagmati waiting for the aarati to start. The light from the oil lamps makes the entire riverside shine with a coppery red glow. A ritual that started 12 years ago, the Pashupatinath Bagmati aarati draws in people of all ages who come to take in the grandeur well ahead of the scheduled time.

Leading the aarati team, singing the bhajans and the Shiva Tandav is Dr Ramesh Pokharel, who holds a PhD in classical music. It was Pokharel and his colleagues who proposed the idea making the aarati ritual accessible to the general public. “Previously, the aarati used to be done inside the temple and people couldn’t take part in it,” he says.

In 2006, they established the Shree Pashupatinath and Bagmati Aarati Sewa Committee and then started conducting the ritual everyday on the banks of the river Bagmati at seven in the evening. The committee is also responsible for sustaining as well as raising funds for the aarati. “The response has been overwhelming. When we first started, people came to Pashupatinath just to hear and see the aarati and that’s true for many people even today,” says Pokharel.

Born in Simpani, Khotang, Pokharel spent his childhood in Inaruwa, Sunsari as his family moved there after his birth. His grandmother was very religious and would often organize bhajans and other religious programs and Pokharel claims to be quite enthralled by it all. “That is when I learnt to play a little bit of harmonium as well as sing bhajans,” he says adding that he has been fascinated by classical music for as long as he can remember.

When Pokharel came to Kathmandu and enrolled at the Nepal Law Campus for a bachelor’s degree, he also started to learn the harmonium and took vocal lessons from Samba Dhar Sharma, a harmonium guru. He says he took these up as a hobby and never considered making a career out of it, not even when he realized that one could study classical music on an academic level.

However, fate had other plans for Pokharel. He was introduced to the songs of classical music maestros like Bacchu Kailash, Pandit Jasraj, Ustad Rashid Khan and Pravid Sultana and was absolutely smitten with their soothing voices and the depth of the lyrics. Heeding his guru’s advice, after his third year at the law campus, Pokharel left Nepal to join the Banaras Hindu University where he completed his diploma, bachelor’s and master’s in classical music.

As a student at the university, Pokharel traveled to Indian cities like Delhi, Badrinath, Assam, Udisha and Lucknow and countries like France to perform at various concerts. In 2005, he returned to Nepal. He would often participate in musical events at Pashupatinath, Kirateshwar, and the Durbar Squares besides performing at private functions as well. “But then I realized I needed a job to sustain myself,” he says adding that he joined the Lalit Kala Campus as a part-time teacher. In the years that followed, he quickly worked his way up the ranks and is now the campus chief.

But his passion lies in singing the bhajans and performing the aarati at Pashupatinath temple. He confesses that he had seen evening aarati being performed at different temples in India especially Banaras and came up with the idea of replicating it in Nepal as well. “It was magical to see devotees immerse themselves in the lights and music. I wanted to see something similar happening in Nepal as well,” he says.

Two years ago, Pokharel returned to Banaras Hindu University to complete his education on classical music and was awarded a PhD on the subject. “I consider myself lucky because I’m one of those few people who could turn their interest into a career, and a satisfying one at that,” he says. Considering how not many people pursue classical music as a career, Pokharel considers it a privilege to be able to do so while being a part of a legacy of sorts.

Seeing people dance to the Shiva Tandav and the crowd of people that never seems to lessen, Pokharel is optimistic about the future of classical music. “I’ve been surprised to see a lot of young people in the crowd gathered to watch the aarati but I’m also happy about it,” he says. Pokharel claims classical music needs young and talented artists to take it forward and that it’s heartening to witness a change in people’s mindset regarding this genre of music.

“A lot of colleges have started teaching classical music and I see many students taking an interest in the field,” he says. Pokharel says he sees a lot of opportunities in the country as well as globally for classical music and claims there’s a good future for those wishing to make a career in it. However, he feels that classical music is yet to be embedded in the Nepali culture but the aarati ritual at Pashupatinath has surely got the process started. “I’m happy and grateful that we thought of taking the aarati outdoor for the masses to witness,” he concludes.

5000 saplings to be planted at Pashupati

KATHMANDU, June 10: A campaign of planting saplings has started in the Pashupati area with the objective of increasing greenery... Read More...

The Pashupatinath Temple  area was jam-packed with colorful Sadhus, devout pilgrims, and curious visitors from within and outside the country... Read More...

KATHMANDU, Feb 23: As the country is preparing to celebrate Maha Shivaratri tomorrow (Friday), movement of devotees and Sadhus has... Read More...