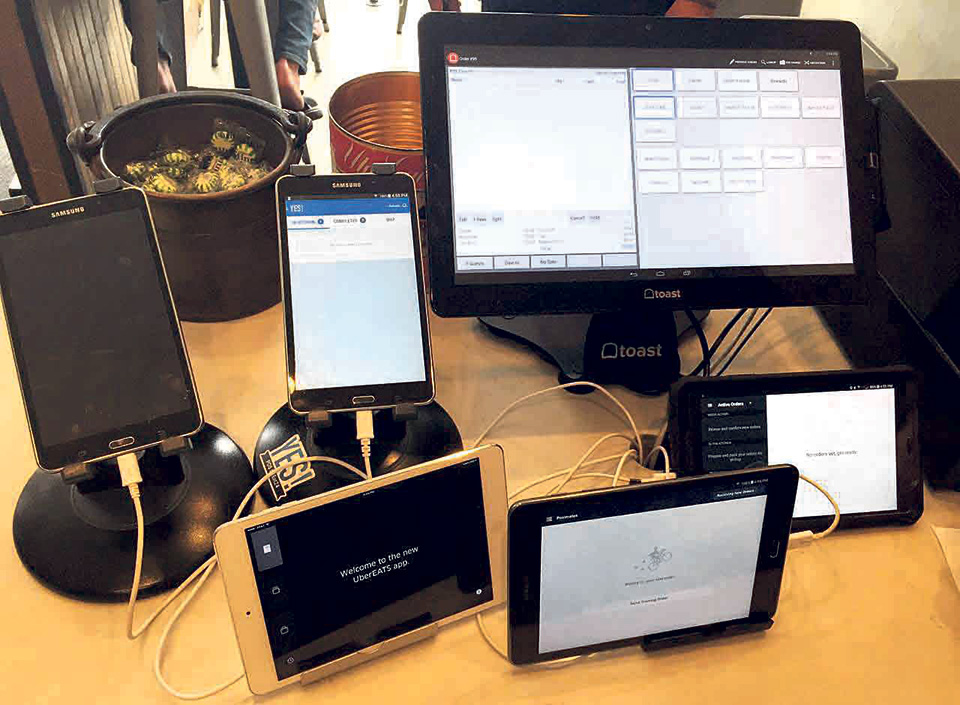 SAN FRANCISCO, August 27: Four tablets from various delivery companies crowd the front counter of Proposition Chicken in San Francisco, each calling out with its own ring when an order arrives.

When there is a ping, a cashier finds the right tablet and then retypes the order into the restaurant's own system, which tells the kitchen to start cooking.

"It's a dance up there," said co-owner Maxwell Cohen. "It takes a lot of training and some getting used to, juggling the orders coming in from the various iPads, the customers in line and the phone ringing."

Cohen's "juggling" reflects a challenge for the burgeoning food delivery industry, a group of independent companies including Grubhub, UberEATS and DoorDash. While hungry consumers can find and order a meal in a single click, delivery technology can complicate work inside restaurants, and some restaurant owners are slimming down their counters in response.

On-demand food delivery has exploded in the last few years, with more than three dozen startups getting initial funding since 2011, according to data firm CB Insights. US restaurants saw $16.5 billion of delivery sales in the year ending June 2017, and non-pizza delivery traffic was up 33 percent in 2015 versus 2012, according to the NPD Group/CREST.

Cohen likes the extra sales, which account for about 10 percent to 15 percent of business. But he will forego outside delivery at a new location opening in nearby Oakland. In-house orders are more profitable and less of a headache, given commissions restaurateurs say reach 10 percent to 30 percent of an order, plus the need for extra staff.

"The challenge with delivery isn't just delivery itself," said Brendan Witcher, an analyst with Forrester. "(It's) about being able to have the restaurant say 'I don't know how we ever did business before this service.'"

Brian Reccow, a partner at Presidio Pizza Company in San Francisco, said he plans to "cull the herd" of delivery tablets on the restaurant's counter. Since costs have risen along with sales, he does not see a profit boost from the deliveries, just better publicity.

Venture investors poured $2.5 billion into on-demand delivery companies last year, according to a Reuters analysis. But investor enthusiasm has waned and the market has continued to consolidate as smaller players are acquired or shut down, according to CB Insights.

Brook Porter, a partner with venture capital group G2VP, a spinoff of Silicon Valley investment firm Kleiner Perkins Caufield & Byers, said that delivery companies should focus on a type of food or part of the market to distinguish themselves.

"Or," Porter said, "you need to have some substantial technology advantage that gives you a lower cost to operate and to deliver."

Grubhub and its Seamless unit accounted for more than half of the top companies' delivery sales in the fourth quarter of 2016, according to market analytics firm 1010data. Eat24, which Grubhub is buying, Uber Technologies Inc's UberEATS and DoorDash follow, with UberEATS growing the fastest of the group.

NCR Corp, a provider of point-of-sale software that restaurants use to handle orders, recently announced partnerships with Doordash and Grubhub.

An automated process is exactly what Charles Bililies, owner of Greek eatery Souvla in San Francisco needed. He chose a single delivery company, Square Inc's Caviar, which brings in about a quarter of sales and sends orders directly to the kitchen.

"We had kind of gone on some first and second dates with some other delivery companies," he said. "We were actually on multiple platforms at the same time, and for us it just got to be far too cumbersome."