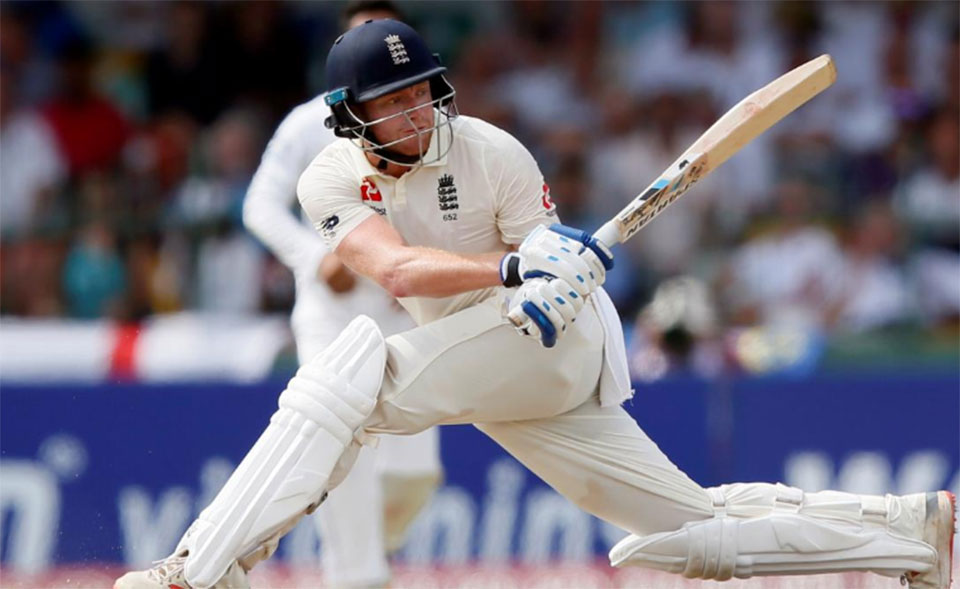 COLOMBO, Nov 23: Jonny Bairstow hit a fluent 42 not out to guide England to 102 for two at lunch on the opening day of the third and final test against Sri Lanka on Friday.

The wicketkeeper missed the series opener in Galle through an ankle injury and the batting and neat glovework of his replacement Ben Foakes kept Bairstow out of their series-clinching victory in Pallekele.

Brought back purely as a batsman in the dead rubber and sent in at number three, Bairstow hit four boundaries and a six, leading a rebuilding job with skipper Joe Root after England had slumped to 36 for two at the Sinhalese Sports Club.

Root was unbeaten on 28 at the break, having elected to bat for the third time in the series after winning his eighth successive toss in test cricket.

Off-spinner Dilruwan Perera drew first blood for Sri Lanka when he hit the top of Rory Burns’s off-stump, having induced the opener, on 14, into attempting a cut shot off the backfoot.

Malinda Pushpakumara drove home the advantage in his first over when Keaton Jennings (13) tickled the left-arm spinner to Roshen Silva, who had been stationed at leg slip precisely for that purpose.

Bairstow used his feet against the spinners and swept them with confidence, the best illustration being when he slog-swept Pushpakumara over the square-leg boundary for an effortless six.

Sri Lanka did not help their cause by blowing both their reviews in the first session in their desperation to separate the duo.

The tourists brought in seamer Stuart Broad for the rested James Anderson, while Bairstow replaced injured all-rounder Sam Curran, who is out with a side strain.

Suranga Lakmal continued to lead the hosts in absence of regular skipper Dinesh Chandimal, who has not recovered from a groin injury.

Sri Lanka are also without spinner Akila Dananjaya, who took eight wickets in Pallekele but is having his bowling action assessed in Australia this week after being reported for a suspect action during the Galle loss.

PALLEKELE, Nov 18: England captain Joe Root was particularly pleased that he practiced what he preached after his sublime century... Read More...

SRI LANKA, Nov 17: England were all out for 346 in their second innings in the first session on the... Read More...

Rapid Diagnostic Test not reliable: WHO Nepal Office
12 hours ago

PM Oli addresses the nation (with video)
9 hours ago

INFOGRAPHICS: Nepalis affected by COVID-19 throughout the world
22 hours ago