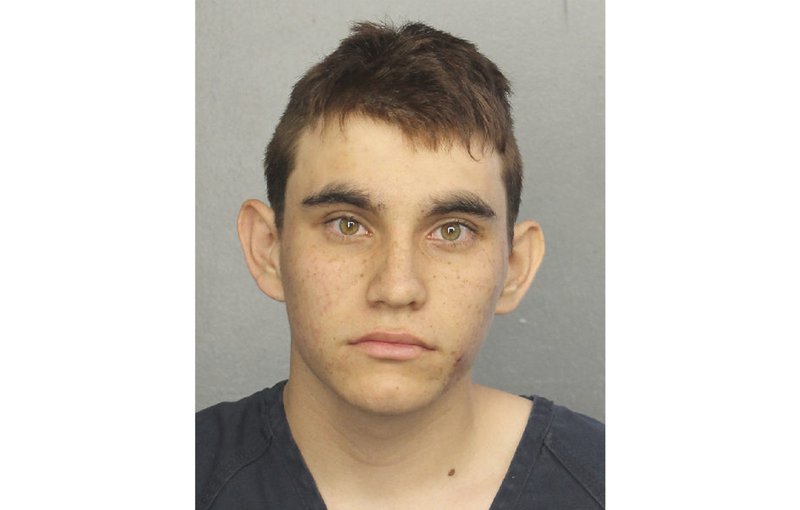 PARKLAND, Fla., Feb 15: An orphaned 19-year-old with a troubled past and his own AR-15 rifle was charged with 17 counts of premeditated murder Thursday morning after being questioned for hours by state and federal authorities following the deadliest school shooting in the U.S. in five years.

Fourteen wounded survivors were hospitalized as bodies were recovered from inside and around Marjory Stoneman Douglas High School.

Nikolas Cruz, still wearing a hospital gown after being treated for labored breathing, and weighing in at 5-foot-7 and 131 pounds, was ordered held without bond and booked into jail.

His former classmates thought they were having another drill Wednesday afternoon when a fire alarm sounded, requiring them to file out of their classrooms.

That’s when police say Cruz, equipped with a gas mask, smoke grenades and multiple magazines of ammunition, opened fire with a semi-automatic weapon, killing 17 people and sending hundreds of students fleeing into the streets.

It was the nation’s deadliest school shooting since a gunman attacked an elementary school in Newtown, Connecticut, more than five years ago. The overall death toll differs by how such shootings are defined, but Everytown For Gun Safety has tallied 290 school shootings in America since 2013, and this attack makes 18 so far this year.

Cruz purchased the AR-15 legally about a year ago, a law enforcement official who is familiar with the investigation told The Associated Press. The official, not authorized to discuss this publicly, spoke on condition of anonymity. Federal law allows people 18 and older to legally purchase long guns, including this kind of assault weapon.

“So many signs that the Florida shooter was mentally disturbed, even expelled from school for bad and erratic behavior. Neighbors and classmates knew he was a big problem. Must always report such instances to authorities, again and again!” Trump tweeted Thursday.

Authorities offered no immediate details about a possible motive, except to say that Cruz had been kicked out of the high school, which has about 3,000 students. Students who knew him described a volatile teenager whose strange behavior had caused others to end friendships with him.

Cruz’s mother Lynda Cruz died of pneumonia on Nov. 1 neighbors, friends and family members said, according to the Sun Sentinel . Cruz and her husband, who died of a heart attack several years ago, adopted Nikolas and his biological brother, Zachary, after the couple moved from Long Island in New York to Broward County.

The boys were left in the care of a family friend after their mother died, said family member Barbara Kumbatovich, of Long Island.

Unhappy there, Nikolas Cruz asked to move in with a friend’s family in northwest Broward. That family agreed and Cruz moved in around Thanksgiving. According to the family’s lawyer, who did not identify them, they knew that Cruz owned the AR-15 but made him keep it locked up in a cabinet. He did have the key, however.

Students are evacuated by police from Marjory Stoneman Douglas High School in Parkland, Fla., on Wednesday, Feb. 14, 2018, after a shooter opened fire on the campus. (Mike Stocker/South Florida Sun-Sentinel via AP)

Attorney Jim Lewis said the family is devastated and didn’t see this coming. They are cooperating with authorities, he said.

Victoria Olvera, a 17-year-old junior, said Cruz was expelled last school year because he got into a fight with his ex-girlfriend’s new boyfriend. She said he had been abusive to the girl.

“I think everyone had in their minds if anybody was going to do it, it was going to be him,” said Dakota Mutchler, also 17.

Cruz was taken into custody without a fight about an hour after the shooting in a residential neighborhood about a mile away. He had multiple magazines of ammunition, authorities said.

The sheriff said 12 bodies were found inside the building, two others outside and another a short distance away from the school.

Sen. Bill Nelson told CNN that Cruz had pulled the fire alarm “so the kids would come pouring out of the classrooms into the hall.”

“And there the carnage began,” said Nelson, who said he was briefed by the FBI.

Frantic parents rushed to the school to find SWAT team members and ambulances surrounding the huge campus and emergency workers treating the wounded on sidewalks. Students who had taken shelter inside classrooms began leaving in a single-file line with their hands over their heads as officers urged them to evacuate quickly.

Hearing loud bangs as the shooter fired, many of the students hid under desks or in closets, and barricaded doors.

“We were in the corner, away from the windows,” said freshman Max Charles, who said he heard five gunshots. “The teacher locked the door and turned off the light. I thought maybe I could die or something.”

Charles said he passed four dead students and one dead teacher on his way out, and was relieved to finally find his mother.

“I was happy that I was alive,” Max said. “She was crying when she saw me.”

Noah Parness, a 17-year-old junior, said he was among students calmly walking to their fire-drill areas outside when he suddenly heard popping sounds.

“We saw a bunch of teachers running down the stairway, and then everybody shifted and broke into a sprint,” Parness said. “I hopped a fence.”

The scene was reminiscent of the Newtown attack, which shocked even a country numbed by the regularity of school shootings. The Dec. 14, 2012, assault at Sandy Hook Elementary School killed 26 people: 20 first-graders and six staff members. The 20-year-old gunman, who also fatally shot his mother in her bed, then killed himself.

Not long after Wednesday’s attack in Florida, Michael Nembhard was sitting in his garage on a cul-de-sac when he saw a young man in a burgundy shirt walking down the street. In an instant, a police cruiser pulled up, and officers jumped out with guns drawn.

SAN JUAN, September 7: Hurricane Irma, one of the most powerful Atlantic storms in a century, killed eight people and... Read More...